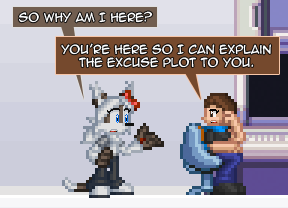 On the left: Két, the protagonist. On the right: Niv, the Author Avatar.
Niv: Y'know, you of all people should really know better than to-
Két: If you don't shut up I will kick your ass when I get back there.
Niv: ...Duly noted.
Advertisement:

A journey through The Multiverse by a wall-aware feline in order to find a scarf with the power of destruction.

Except, it's not that easy anymore. note Formerly "It can't really be that simple, can it...?"

Aware is a Sprite Comic made by Shard

, which tells the story of Két, a wall-aware feline who travels around The Multiverse at Niv's request in order to find a particular item. It can be read here.

In each world, Két must fulfill an "objective" before she can move on to the next one. However, she also has to deal with being chased around by Damaru and Silverado, as well as a multitude of other problems based on whatever world she happens to drop into.

Has a characters page here.