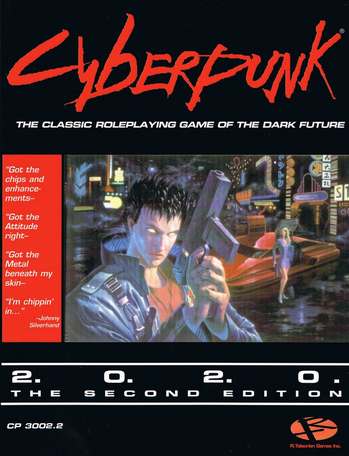 Cyberpunk is a tabletop roleplaying game created by Mike Pondsmith and published by R. Talsorian Games, with the first edition releasing in 1988. The game, as the title might indicate, is based heavily upon the work of William Gibson and Bruce Sterling, to the point where Gibson is often referred to as "Saint Willie" in the various sourcebooks.
Advertisement:

Set in 2013/2020/2045, the players are mercenaries, criminals, and vagabonds in the cyberpunk street culture of the period. American society has broken down, the government is ineffectual, and anything resembling a good life must be obtained by doing dirty work for one of the numerous corporations that quietly control the world. It's become trendy to heavily modify one's body with any number of cybernetic augmentations, whether it's designer eyes, replacement limbs, or combat-ready military gear, but stacking up too much "cyberware" causes a person to enter "cyber-psychosis" and go full-tilt insane.

As the games are a very deliberate, self-aware attempt to capture the feel of the then-burgeoning cyberpunk genre, it can be comfortably assumed that any trope from that particular genre that isn't mentioned will fit neatly here. Supplements to the game allow you to play in specific author's 'verses, such as George Alec Effinger's Marîd Audran.

A videogame set in the Cyberpunk setting was announced by CD Projekt RED, known as Cyberpunk 2077 and appropriately released in 2020. Later on, a fourth edition for the tabletop with a new system, Cyberpunk Red, was announced. It released digitally on November 14th, 2020 . An anime by Studio TRIGGER called Cyberpunk: Edgerunners in collaboration with CD Projekt RED, with Akira Yamaoka as composer was announced to premier on Netflix in 2022.