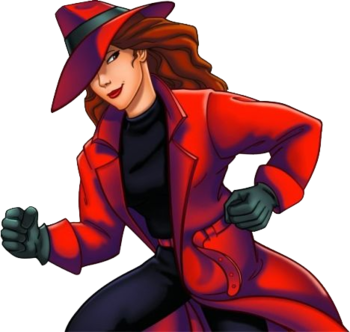 Carmen Sandiego is an Edutainment Game series created by now-defunct Brøderbund Software in 1985. The series became phenomenally successful in the 1990s, spawning no fewer than three television shows, two on PBS and one on Fox, then falling into obscurity shortly around the Turn of the Millennium before resurrecting around The New '10s, starting on Facebook. The series is now owned by Houghton Mifflin Harcourt. There probably have been plenty of games released, and Carmen just stole them all.

The standard case involves an educational quest to find The Loot, The Warrant and The Crook.

Carmen Sandiego is an international thief, and it's down to the Interpol-esque ACME Detective Agency to stop her plans. Fortunately, she plays Criminal Mind Games with her pursuers to provide the obligatory Alphabet Soup Cans. But don't worry; she's a Friendly Enemy—at least some of the time.

Her Back Story? Carmen was a star ACME agent until she decided that catching crooks was just too darn easy. Therefore, she did a Face–Heel Turn and became a Gentlewoman Thief. Then she decided to have Fun with Acronyms by founding an organization called the Villains' International League of Evil (V.I.L.E.). Although V.I.L.E. is progressive enough for Equal-Opportunity Evil, you absolutely must have a Punny Name to join.

The thievery of Carmen is second to none. She doesn't just steal jewels; she steals national monuments, even ones that should be physically impossible to "steal." For example, she once stole the Grand Canyon. Since the Grand Canyon is basically a giant hole in the ground, we shall leave it to you to figure out how that works. She's even been known to time travel, just so she can find more stuff to steal.

Plans to make a live-action movie starring the character by both Walt Disney Pictures and Walden Media (both Sandra Bullock and Jennifer Lopez have been suggested to play the role) have been in development hell since the late 1990s. However, it was announced in 2017 that Gina Rodriguez (Jane the Virgin) had been tapped to portray the character in (and serve as a producer for) a live-action film to be produced by Netflix, which also spawned an animated series in 2019 with Rodriguez in the same role.

Games in the franchise include:

TV shows in the franchise include: