This page lists the princes under the 'Cool' attribute in 100 Sleeping Princes and the Kingdom of Dreams.

In General
They can be either shy or introverted or attempt to be the advisor to the princess. They are often harsh and less willing to talk about their feelings at first, and it takes a while for them to warm up. Many of them come laden with certain emotional baggage and thus, may appear standoffish and cold to others.
Almari

Country: Country of Jewel - Malineglace
Age: 17
Spending his time tirelessly looking after his elder twin brother, Tormari, Almari is often fatigued and has developed a gloomy disposition. He has a docile personality.
Azuma 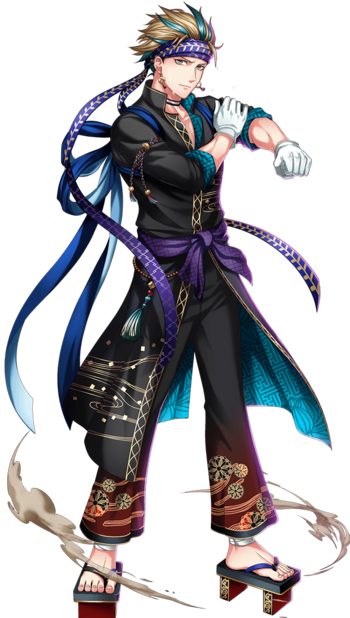 Hero version - Sun awakening
Country: Soga Country
Age: 18
Azuma has a brusque, honest personality. Though he excels in all forms of martial arts, he much prefers to settle disputes peacefully.
Capita 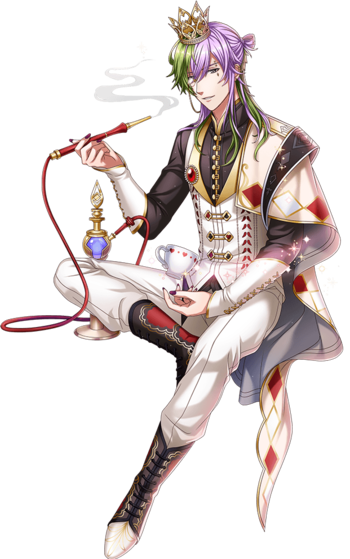 Trial version - Moon awakening
Country: Country of Marvel - Wondermare
Age: ???
From the clan of caterpillars in Forst. Capita has a strong sense of curiosity, and will question everything. He is a distant ivory tower as he spends all his time in a world of deep thought. Has a unique commitment to using a hookah and wearing his monocle. Just like most of the Wondermare princes, he is still very much hung up on Alice.
Carlo 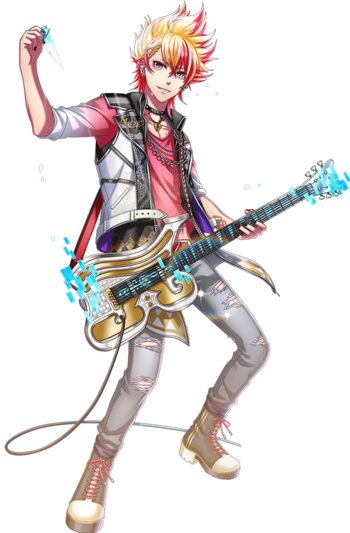 Rock Fes! version - Sun awakening
Country: Country of Study - Litoria
Age: 18
Carlo has a wilful personality and a lot of confidence in himself. He wants to break away from his high-class life and family to live a truly punk lifestyle. He can't really handle himself when people call him 'cool'. 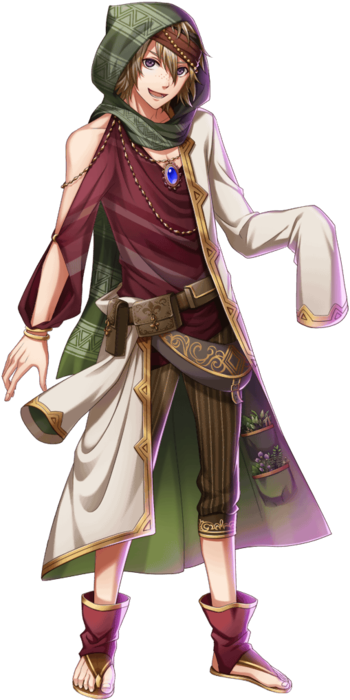 Country: Country of Pharmaceutics - Medicina
Age: 15
Head of the Guild of Pharmacists of Medicina, Dayang roams around selling medicine. He loves money, and believes it makes the world go round. Because of this love, he has a habit of fiddling with his abacus.
Deneb

Country: Country of Star - Northern Cross
Age: 23
Though Deneb looks as delicate as a porcelain doll, he is extremely clever. He is aloof and difficult to read. Good friends with Vega and Altair.
Drei

Country: Country of Time - Crawford
Age: 24
Drei has a brilliant mind, and views life as a game. He often hides himself away in his room, even to the point of neglecting his health. He enjoys strategising even when his life is on the line.
Forma

Serenade version - Unawakened
Country: Country of Poison - Fartet
Age: 24
Forma's face is that of a diligent, intelligent worker. He has the ability to absorb poisons. He has a habit of staring intently on his food before eating it.
Frost

Snowing version - Unawakened
Country: Country of Snow - Snowphilia
Age: 25
The first prince of Snowphilia. Frost has two younger brothers, Graysia and Synny. He places a lot of value upon his family name, and is a highly prideful man who excels in many areas. No matter the subject he will believe himself to be far superior in it. He isn't very good at considering people's feelings, however.

Country: Country of Moonlight - Clairboor
Age: 22
Girbert has a proud and dignified air that everyone praises as a true figure of the royal family. He dislikes older women.
Graham 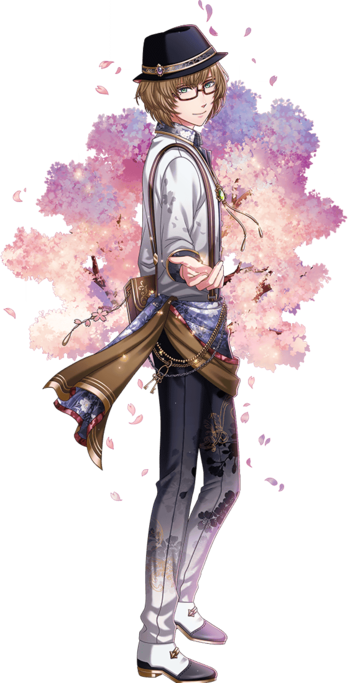 Fluttering Sakura version - Moon awakening
Country: Country of Literature - Mysterium
Age: 19
Graham is a famous mystery writer who has won numerous awards, and is considered the type of genius that only appears once in a century. He has an air of self-confidence that there are no mysteries he cannot solve. However, he is vulnerable to unexpected events.
Joshua 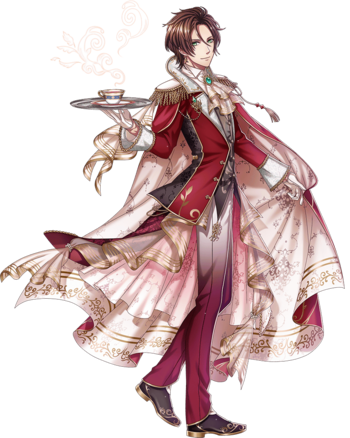 Crimlight version - Sun awakening
Country: Country of Black Tea - Bergant
Age: 18
Joshua is a prideful prince with a refined conduct. He is strict with regards to the manners of both himself and the people around him. He loves cleanliness, and cannot abide people who are dirty.
Julius 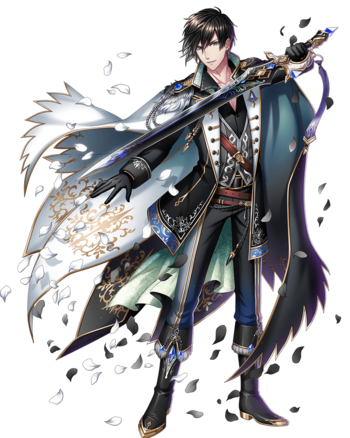 New Dream version - Sun awakening
Country: Country of Flower and Greenery - Bloomeria
Age: 22
Though Julius has a brusque and rough manner of speaking, he uses this demeanour to hide his shyness. He is talented at mixing perfume. During a recent war, he became afflicted by a condition in which he will involuntarily attack anyone who gets too close to him.
Kagetora

Country: Country of Literature - Wilhelm
Age: 35
Kagetora draws many storybooks with happy endings in order to encourage his sick little sister and other children like her. Though he is a very popular author with both children and their parents alike he is concerned that his face is scary, so he writes under the pseudonym 'Margaret' and doesn't disclose his real identity. Though he is often feared because of his appearance, he actually has a gentle personality which is reflected in his writing.
Kanoe

Country: Country of Calendar - Kuyou
Age: 25
Kanoe is from the family of the Monkey. He is a specialist in dance, with a hardworking, responsible personality. His abrupt manner often scares people off, but beneath it he is kind.
Kies

After Story version - Unawakened
Country: Country of Jewel - Ocs
Age: 27
Kies shows a great amount of affection to his possessions, whether they are people or objects. He shows particular care to the precious music box gifted to him by his late older sister.
Lecien 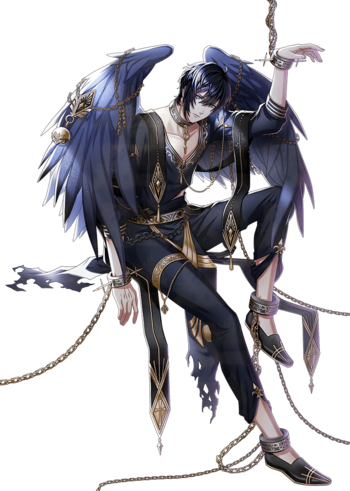 Noble Wings version - Moon awakening
Country: Country of Judgement - Arbitro
Age: 25
His wings turned black after in an incident where he saved Micaela and Adiel. Cursed and feared for his black wings, Lecien isolates himself from other people, shutting himself up in his castle. Despite his cold outward demeanor, Lecien is very gentle and kind, always putting others before himself. He often feeds birds on his balcony.
Lian 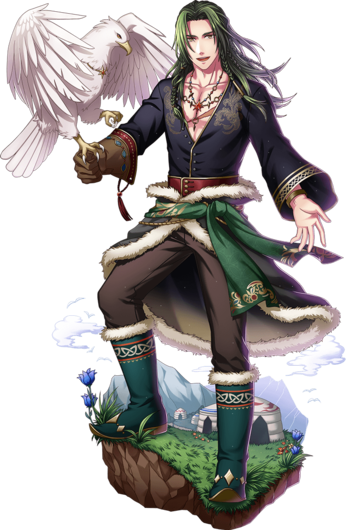 After Story version - Moon awakening
Country: Nomad - Toura Tribe
Age: 29
Lian is the son of the chief of the Toura tribe. He has a gallant spirit, and is highly compassionate. Though people are often scared of his fierce-looking face, he doesn't really mind. He excels in martial arts.
Patir

Country: Country of Colours - Farber
Age: 19
With a free and unrestrained personality, Patir spends his time studying colour in his workshop. He has a special skill which allows him to perfectly reproduce any colour once he has seen it. He will thoroughly investigate things that capture his interest, but will quickly forget anything that doesn't interest him.
Perla

Country: Country of Jewel - Margarita
Age: 18
Perla is the type that finds everything too much effort. He doesn't even care if he has bed hair. The other princes of the country of jewels have dubbed him the 'wasted beauty'. His tears turn into pearls.
Rica

Dusk version - Unawakened
Country: Country of Chocolate - Shocolute
Age: 23
A prince who speaks in a very straightforward manner. He may seem like he's being hurtful, but he's just honest and doesn't mean any offense. He hates being alone and feeling lonely. He has somewhat of a gambling problem. Rica was raised with Martin, Colorer, and Creto, and views them as siblings. Creto thinks he is very cool. Martin calls him 'Rica-chan', much to his chagrin. He enjoys going into the city under the name of 'Dark'.
Sai 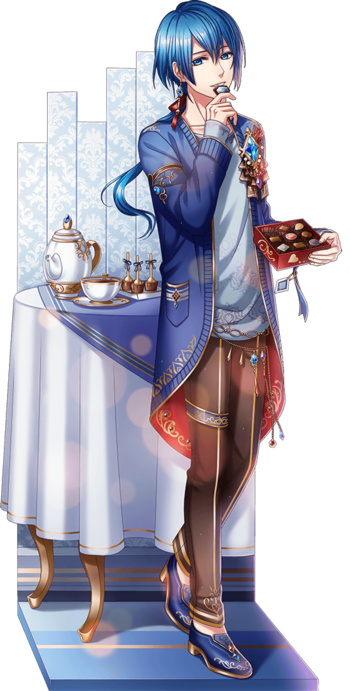 Gems of Snow version - Moon awakening
Country: Country of Jewel - Saphinia
Age: 20
Sai has a gentle and thoughtful personality, but has a wall up between himself and others. He is bad with fire due to an incident in his past. He is close to Tiga and Lid.
Sarasa 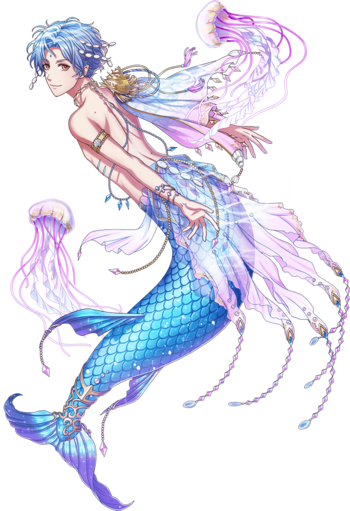 Adventurer version - Moon awakening
Country: Country of Mermaid - Lorelei
Age: 22
Though he isn't very talkative and can come across as unfriendly, Sarasa has a great deal of curiosity. He has been taught that humans are bad, but he is still interested in learning about them. The first human that he talked to was Prince Douglas of Ancula.
Shin

Country: Country of Calendar - Kuyou
Age: 25
Shin is from the family of the Rat. He specialises in calligraphy and ink-wash painting. He subjugates people with his cool composure, open-mindedness and overwhelming charisma. He doesn't hesitate to use his coldheartedness to cut down people to achieve his goals and keep control of his subordinates. He is proud of his status as the prince of the family of the Rat, the highest of the 12 royal families of Kuyou.
Spica

Country: Country of Star - Beltere
Age: 22
Spica rarely gets angry and is always smiling, but when he does lose his temper he can be terrifying. Though he is incredibly clever, he has a poor sense of direction. He enjoys telling horoscopes.
Ster 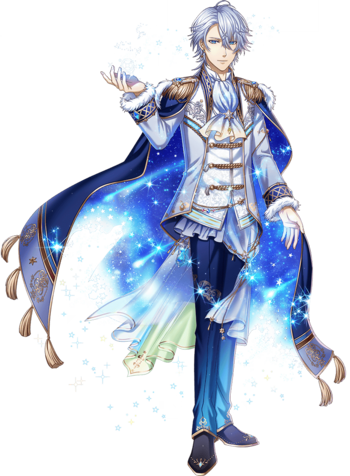 New Dream version - Sun awakening
Country: Country of Falling Star - Meteobel
Age: 23
Ster has the power to grant wishes, but as he grants them the stardust falls to the lower chamber of the hourglass he wears around his neck. Although his blunt manner of speaking may make him seem aloof, he has a kind heart.
Superbia 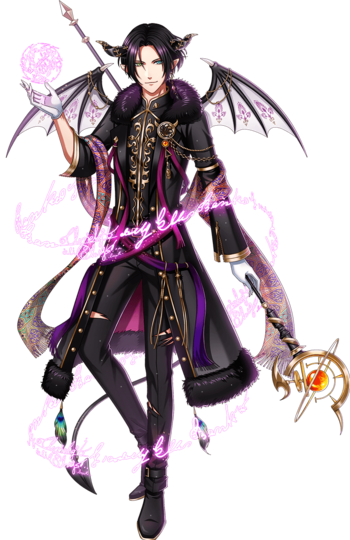 Records version - Sun awakening
Country: Country of Sinner - Votalia
Age: 20
Prison warden for prisoners who have committed the crime of 'Pride'. Superbia has high self-esteem and is uninterested in others. He has a very black-and-white sense of morality. He generally uses feminine speech patterns, and seems to be extremely picky about things. In his spare time, he works as a fashion designer and model.
Theodor 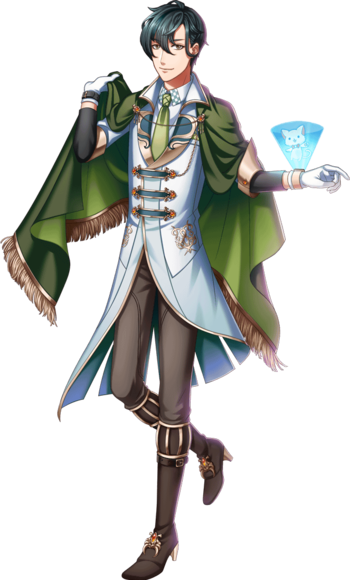 Original version - Sun awakening
Country: Country of Archive - Lecord
Age: 26
As a Lecord prince, Theodor is the one charged with keeping records on popular culture. While carrying out his duties, learning about popular culture sparked off an interest in technology, which is why he owns a watch that can create holographic projections among other functions. He can be very enthusiastic about his interests and will ramble on about them. However, he is aware about his habit of rambling and will oftentimes cut himself off in the middle of talking to apologise for boring the listener.
Thinpla 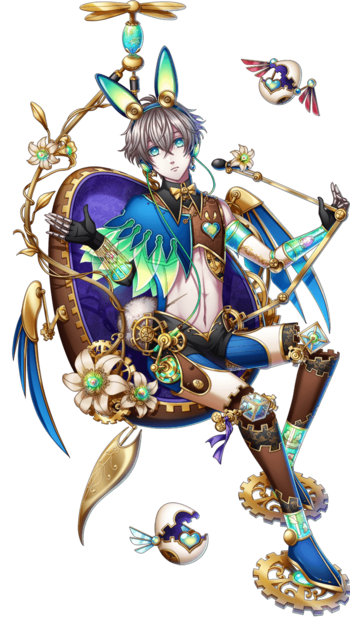 Easter version - Moon awakening
Country: Country of Rainbow - Oz
Age: 22
Thinpla is a cyborg, with half his body made of machinery. Due to his modifications he is used as a living weapon burdened with protecting the country. He believes he doesn't have a heart.
Thor 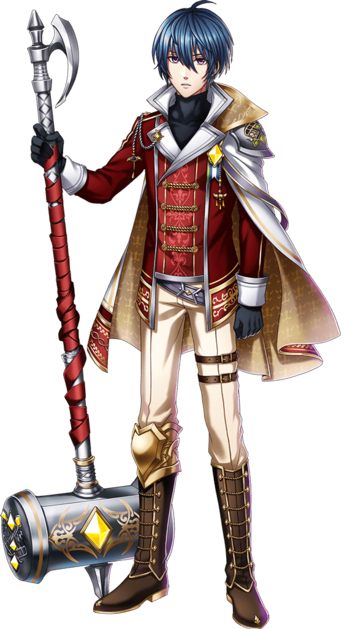 Power version - Unawakened
Country: Country of Weapon - Asgarz
Age: 17
Calm and composed, Thor has a wicked tongue which belies his gentle side. He inherited his hammer, Mjolnir, in order to go on a mission to defeat their archenemy Jormungandr.
Toya

Country: Country of Four Seasons - Hourai
Age: 24
Toya is a happy drunk, but, since his smile calls forth warm weather, he has to abstain from drinking during the winter, as it his duty to maintain the season.
Vim

Riding Hood version - Unawakened
Country: Country of Wolf Beastman - Besmaar
Age: 23
On the night of the full moon, Vim disappears from the castle. When he returns, there are marks on his wrist that look like bruises. He keeps himself distant from other people.
Zant 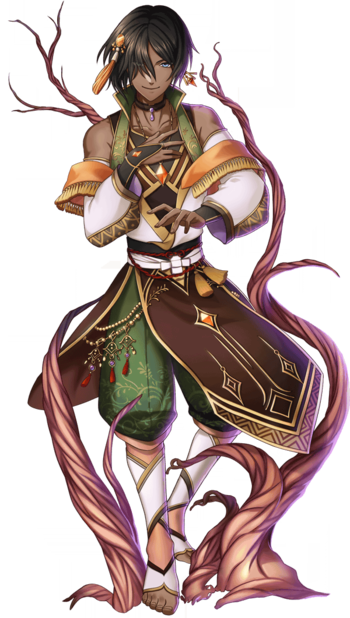 Original version - Sun awakening
Country: Country of Spirit - Secundati
Age: 25
Prince of the Earth clan of Secundati. Zant keeps others at a distance, but has a gentle disposition towards the soil and flowers. He has blocked a certain incident in his past from his mind.
Zero

Clock version - Unawakened
Country: Country of Time - Lyspur
Age: 26
Zero lives his life by the principles of rationality, and anything that doesn't conform to his mind's logic confuses him. He isn't good at feelings and other things that cannot be explained by reason. He likes cooking.