This page lists the princes under the 'Gentle' attribute in 100 Sleeping Princes and the Kingdom of Dreams.

In General
Many of the older princes tend to fall into this group. Some may have already seen much of the world and seek more to become a stable partner to the princess. Quite a few of them believe strongly in virtue and value, though some may hold a jaded view of life, at times bordering on fatalism or just status quo.
Altair

Country: Country of Star - Galassia
Age: 20
A wise and brave prince of Eastern Galassia. He holds the welfare of his people as of the utmost importance. Altair can control his eagle by whistling. He is concerned about - and will spend most of his time discussing - Vega, his counterpart in Western Galassia.
Camilo

Country: Country of Judgement - Arbitro
Age: 29
Camilo's role in the Country of Judgement is to manage and escort defendants set to go on trial. He takes his job very seriously and is a specialist in archery. Honest and pure, he finds it very difficult to talk to women.
Carlyle 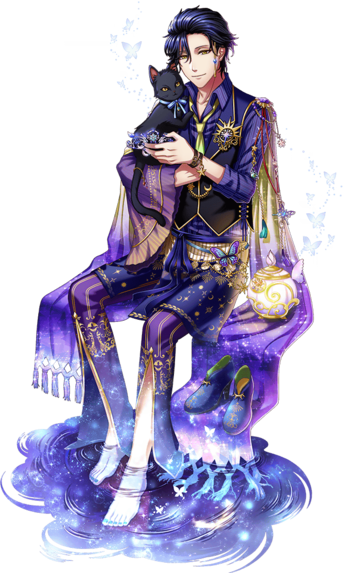 Guide version - Moon awakening
Country: Country of Crown Craftsmen - Corona
Age: 30
An elusive but well-mannered prince, Carlyle is a prodigy in crown craftsmanship whose works are highly valuable. The royal family of Corona have historically made the crowns for the royal family of the Dream Kingdom, Traumere, for generations, and Carlyle is the most recent craftsman to hold this honour. He wants to have more freedom to create his own designs.
Chrono

Original version - Moon awakening
Country: Country of Marvel - Wondermare
Age: 23
The role of Chrono's family is to protect the time in Wondermare. His clock has the ability to cycle through time. While he works hard at his job, he finds it quite difficult. Chrono is the grandson of the original white rabbit who met Alice when she fell into Wondermare.

Country: Country of Passion - Randalcia
Age: 27
Cohen is a passionate prince who constantly chases after women and is aggressive in his seduction attempts. When seducing women, he cares for them and treats them like a princess. It is a widely held belief in his country that it is impossible for men and women to merely be friends.
Dormouse 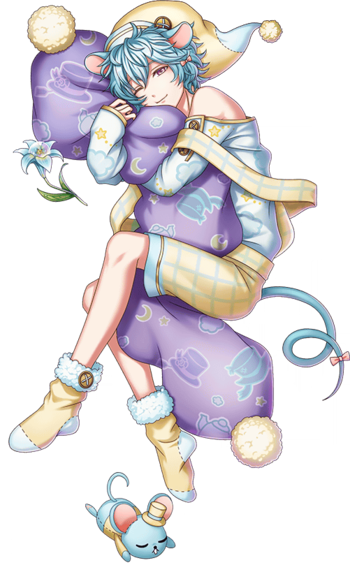 Bridal version - Unawakened
Country: Country of Voice - Vox
Age: 18
Flu is the second prince of the Country of Voice. Quiet and timid, he finds it difficult to raise his voice above a whisper. He is always overshadowed by his cheerful older brother, Stimma, and his boisterous younger brother, Rufen. Behind his soft-spoken exterior, he has surprising inner strength.
Fujime 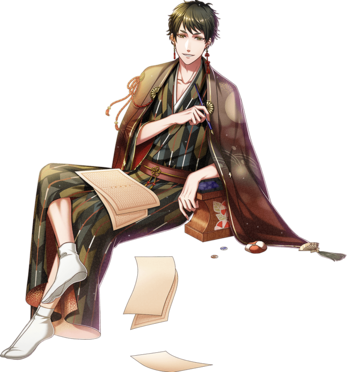 Moonlit Night version - Sun awakening
Country: Country of Literature - Shinonome
Age: 27
A renowned short novelist, Fujime is well-regarded as a romance author. He is very creative, and often draws inspiration from the love stories of others. However, he has little personal experience of romance. While he appears gentle, he can be stubborn.
Gary 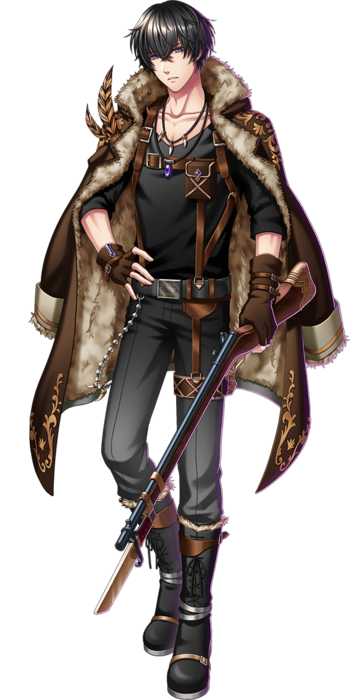 Riding Hood version - Unawakened
Country: Country of Moonlight - Clairboor
Age: 26
Gary has a kind demeanour, but hides his fiery emotions beneath his gentle image. He is on a journey to undo the curse that makes him act like a violent beast at night. He is highly dextrous with his hands and is a master of the crossbow. Girbert is his beloved younger half-brother.

Country: Country of Movie - Romandia
Age: 18
Popular as a mainstream romance movie actor, Gerald is a friendly prince who wants to expand his repertoire outside the romance genre. However, he is facing issues with typecasting. He is known as 'Gerry' by his friends.
Hinoto

Country: Country of Calendar - Kuyou
Age: 25
Hinoto is from the family of the Ram. He is a specialist in Taiko drumming, and has a calculating personality. Though he is curt and criticising with men, he has another face for women.
Ira 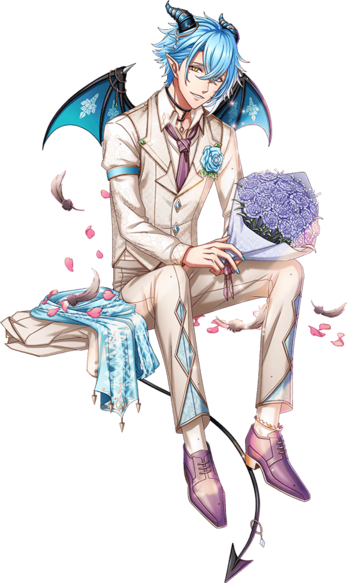 Wedding version - Sun awakening
Country: Country of Sinner - Votalia
Age: 23
Prison warden for prisoners who have committed the crime of 'Anger'. While he tries to keep himself calm, he will fly into a violent rage once angered three times. When he gets angry, though, he maintains his polite tone.
Iria

School version - Unawakened
Country: Country of Sorcery - Soltiana
Age: 18
Iria is the elder of the two princes of Soltiana, the other being Miya. He is soft-spoken but capable, and can handle the expectations placed on him as the heir to the throne. He is aware of his responsibilities and does his best to respond to the public affairs of his country.
Jay

Hospitality version - Moon awakening
Country: Country of Clergyman - Norpli
Age: 39
While Jay has a kind and gentle personality, he is not particularly open to others. Long ago he was bitten by a vampire - his boarding school friend Alfred's father - and as a result is a half-vampire who cannot go out into the sun. The people of his country are cold to him, and his family doesn't really acknowledge him. He needs Martin as a mediator between him and Alfred, as they both still feel uncomfortable about Jay's attack. He enjoys painting and art, but his style is rather abstract.
Koga 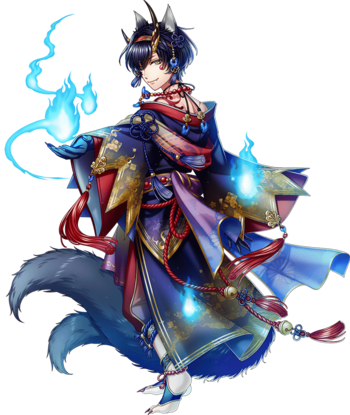 Oni version - Moon awakening
Country: Country of Great Fox Spirit - Iroga
Age: 2000
The older brother of Saiga, Koga holds the power of the temple to bring rain. He is over 2000 years old, but still has youthful looks. He is sensitive about his appearance and gets angry when people call him cute. Saiga enjoys teasing him.
Kotohogi

Sakura version - Sun awakening
Country: Country of Light - Amatsu
Age: 22
Kotohogi is the kind and wise heir to the throne of Amatsu. Though he works hard as a prince, he feels a great emptiness inside. He maintains a small garden. He is the light counterpart to Shigure, prince of the Country of Darkness.
Lateria

Original version - Sun awakening
Country: Country of Ice Treats - Amarena
Age: 34
His dignity and splendour has earned him great trust from his subjects. Lateria has ice powers which allow him to maintain the ice crystals which keep his country of Amarena afloat and in one piece. He has an older sister who he replaced as heir to the throne at the time of his birth due to primogeniture, and a nephew from her. He is not at his best in the morning as he has low blood pressure.
Martin

Sparkling Night version - Moon awakening
Country: Country of Brandy - Van Brulee
Age: 40
A gentlemanly prince with an adult air. He is good at sports - especially darts - and is very competitive. Best friends with Alfred and Jay, he is often used as an intermediary between them but wishes they would speak to each other normally. He was raised with Colorer, Rica, and Creto, and views (and teases) them as his little brothers. He enjoys helping out at his friend's bar.
Morta 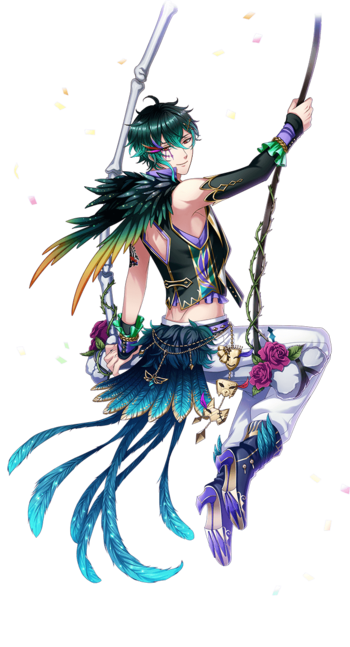 Original version - Sun awakening
Country: Country of Aspiration - Circo
Age: 25
Eldest prince of Circo. He is the star and coordinator of the trapeze and acrobatics show in his younger brother Nero's circus. He believes that death is a reward for people because have tried their best throughout their lives. Morta has somewhat of a split personality, with both a clever and agreeable face, and a cruel and ruthless face. He cares greatly for all his brothers, and tries to prevent Drole from acting on his masochism by wrapping up his scissors with ribbon. Morta makes all the circus costumes for his brothers. All four siblings were helped by Prince Crown when the majority of adults in Circo were killed during experimentation with bioweapons.
Oka

Seasons version - Unawakened
Country: Country of Four Seasons - Hourai
Age: 23
Oka is an elegant and refined prince, and his ephemeral behaviour is said to call into mind the image of falling cherry blossom petals. He has a weak constitution as a result of a chronic disease.
Oswald

Easter version - Unawakened
Country: Country of Rainbow - Oz
Age: 35
A prince who has brought great technological advancements to his country of Oz. Though many of his subjects seem to be under the impression that Oswald is a powerful wizard, he is actually just a gifted technician. He enjoys winding his fellow princes of Oz up.
Raven

Ship version - Unawakened
Country: Country of Calm Evening - Revelta
Age: 20
Raven's smile holds deep sadness, as he is caught up in mourning for his deceased fiancee, Ophelia. He focuses a lot of care upon his 5-year old brother, Claudius.
Rege

Country: Country of Etiquette - Pluter
Age: 25
Rege is well-mannered and gentle, and is able to judge people without letting his personal feelings cloud his mind. He has impeccable manners, but he is concerned by his relationship with his younger brother.
Saiga

Country: Country of Great Fox Spirit - Irogu
Age: 1000
Holding a mysterious aura of bewitching beauty due to his advanced age, Saiga has the power to command the rain. He lives in places protected by red shinto gate boundaries. He enjoys teasing his older brother Koga.
Sefir 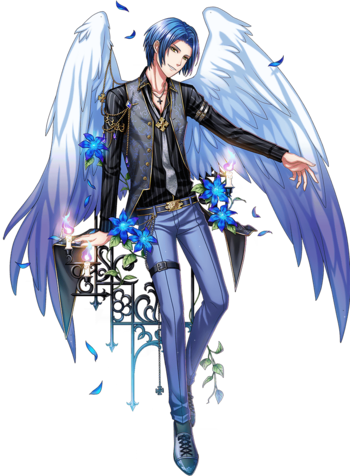 Wedding version - Moon awakening
Country: Sky Country - Ange
Age: 25
Sefir's priorities centre on the prosperity of his country, and he has been aware of his duties from a very young age. Though he works harder than anyone to keep his heart pure, he has a forceful and lusty side. When he was little he used to be friends with Dion, prince of Ivia.
Shao 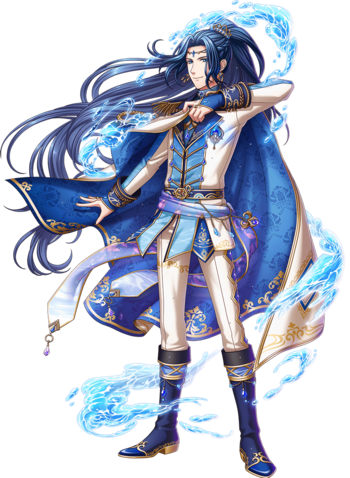 Sentai version - Sun awakening
Country: Country of Spirit - Secundati
Age: 29
A gentle and calm prince from the water family of the Spirit country, Shao is very popular with the children of his city. He has a playful side, and can control water.
Sieg

After Story version - Unawakened
Country: Country of Jewel - Methystia
Age: 26
Sieg is a prince with a gentle demeanour, who speaks formally to everyone, no matter their age. He values chivalry highly, and though he is a prince he longs for someone he can swear his loyalty to, and be their knight for the rest of his life.
Tell

Country: Country of Movie - Kenal
Age: 30
Tell has a serious personality. He is a renowned film director who can shoot any genre apart from horror, and is especially famed for his documentaries. He is teased by his younger brother, Will, because he's no good at horror.
Toto 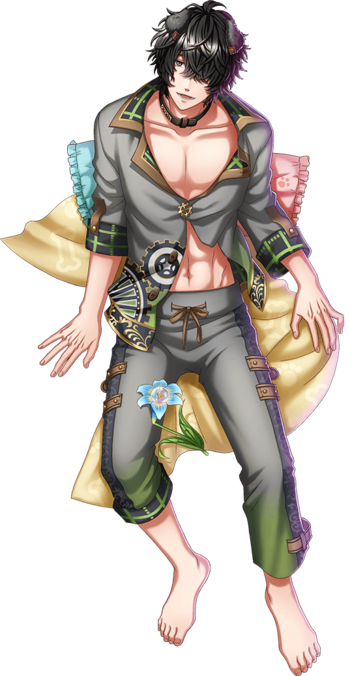 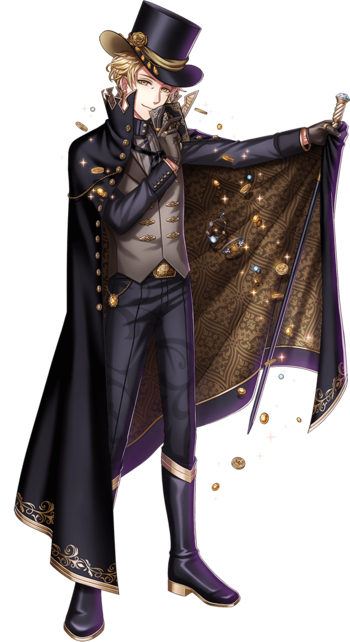 Detective version - Moon awakening
Country: Country of Jewel - Toriarl
Age: 31
With a gentle and calm personality, Totori is the perfect prince to escort any woman. Despite this, his father the king despairs because he shows no interest in falling in love. He has two sisters, Citri and Litri.
Vicky

Country: Country of Sound - Ribitt
Age: 27
Vicky takes things at his own pace. He is always accompanied by Kerota, from the Frog Kingdom. They are cursed so that they cannot be separated from each other.
Volker

Original version - Moon awakening
Country: Country of Archive - Lecord
Age: 19
Volker's job is to manage the magical record of the world. Though he is severe and strict at his work, he is friendly and gentle outside his job. He doesn't talk to people much, but he loves his pet Ruby, a white male rabbit despite the feminine name.
Zwei

Country: Country of Time - Riement
Age: 31
Disillusioned by the corrupt monarchy led by his father and brothers, Zwei stays away from noble society and spends his time teaching children in the city. As such, he has a prejudice against the upper class. He loves mathematics and learning.