This page lists the princes under the 'Sexy' attribute in 100 Sleeping Princes and the Kingdom of Dreams.

In General
Many of these princes wear their hearts on their sleeves. Most of them can be emotional (either displaying it openly or in a contrived manner) or they may hide a secret or two. Many of them have a specific view of their perfect female, and some of them can be openly brazen about what they like in women.
Alfred

Country: Country of Wine - Dominia
Age: 38
Alfred has the demeanour of an experienced adult. His father was a vampire and his mother was a human. His best friend is Jay, and Alfred has a lot of regret over an incident where his father hurt Jay. Due to their both being princes from alcohol countries, he has been close to Martin for a long time as well. He has been a widower for ten years. His friends call him 'Al'.
Antares

Country: Country of Star - Scor
Age: 29
Antares lives for loving beautiful things, like women and flowers, and will heap gifts upon any and all women. He refuses to allow unclean things. He is forceful when it comes to makeovers, and will bulldoze over personal feelings to accomplish his vision.
Apis

Country: Country of Poison - Avetel
Age: 29
Though Apis is polite and conducts himself with elegance, he despises being touched. He is doted on constantly by his mother, and excels at playing the flute.
Beul

Country: Country of Beastman - Aberdia
Age: 25
When winter approaches, Beul prepares to go into hibernation. He's normally very quiet, but often has his hands full looking after his younger siblings in the place of his father. As a result he is very hardworking.

Country: Country of Weapon - Avalon
Age: 22
Along with his older brother, Prytwen, Caliburn commands the armies of Avalon to subjugate the monsters menacing their country. He is blessed with both wisdom and power, using both to command his troops with strength. His taciturn and distrustful mien means he finds it difficult to trust anyone other than his older brother and father.
Castor 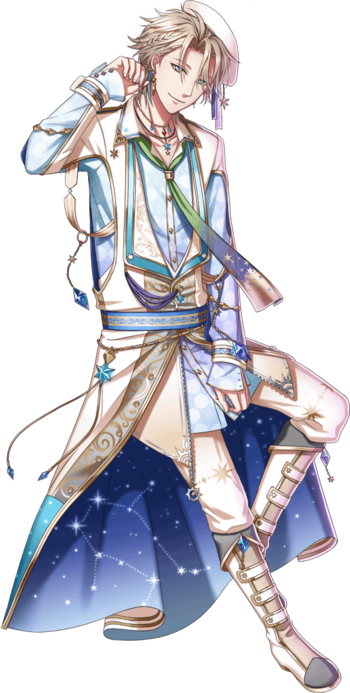 Star version - Sun awakening
Country: Country of Star - Gemio
Age: 24
Castor's kind and gentle personality has led to great expectations being placed upon his shoulders by his people. However, he feels burdened by this and finds it difficult to keep his great secret about his personality. He has a split personality, and his other personality, Pollux, is very different from the face he displays to the public.
Colorer 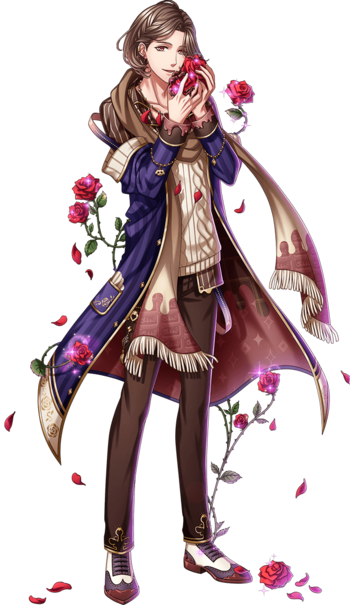 Gift version - Moon awakening
Country: Country of Chocolate - Shocolaberry
Age: 26
Colorer takes things at his own pace, and as a result can lose track of time when he gets caught up in doing something. He loves making chocolates, and is always thinking up recipes. He is very close to his pet dog, Soufflé, and enjoys walks through berry fields. He was brought up with Martin, Rica, and Creto, and considers them his siblings.
Crown 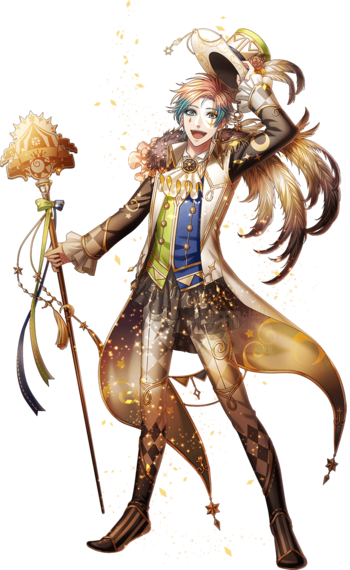 Longing version - Sun awakening
Country: Country of Jester - Carnaval
Age: 26
Crown takes pride in his foolish behaviour without showing his true feelings. He has a special technique that can make anyone smile, and is working towards a goal of making 100 people smile.
Dion 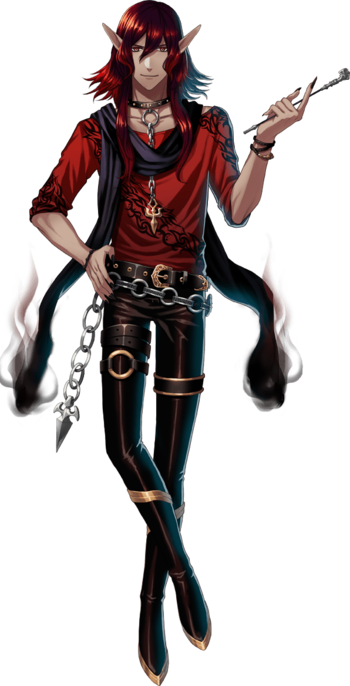 Country: Country of Earth - Ivia
Age: 24
The sixth prince of Ivia. Dion has showed no interest in succeeding the throne or political affairs, but instead enjoys behaving irresponsibly in the city, but he has a reason. When he was little he was friends with Sefir. 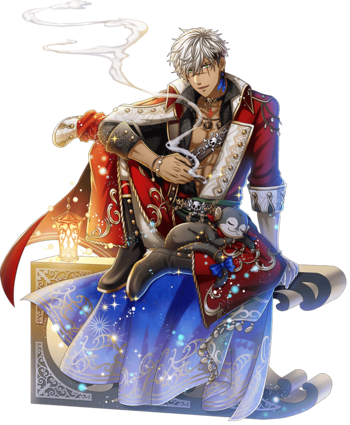 Dream Ship - Moon awakening
Country: Country of Pirate - Ancula
Age: 29
Douglas traverses Ancula on his ship, working as a pirate to protect the peace and order of the seas. Despite his piratical appearance, he is a true gentleman, experienced in escorting women. He is devoted to his family and hunts treasure for the sake of his mother. His monkey is called Bonita.
Drole

Country: Country of Aspiration - Circo
Age: 16
The youngest of the four princes of Circo. He performs tightrope work in the circus troupe run by his older brother Nero, because he is interested in how much it would hurt if he fell. He also derives a lot of pleasure from doing his own piercings. Though his masochism inspires a lot of his actions, he is adept at taking care of people, and is often trusted to look after children.
Dulfer

Country: Country of Judgement - Arbitro
Age: 28
Dulfer's specialty is singing, and he uses his talent to inspire morale in troops and ease the minds of his people. He is able to charm many women through his beautiful singing voice and elegant appearance. However, he is completely uncooperative and often ends up dumped by the women he charms. This attitude has gained him a lot of enemies.
Frites

Forest version - Unawakened
Country: Country of Authority - Gloria
Age: 25
Frites is an incredibly prideful person who gets upset if he doesn't get his own way. He has a strong desire to control and get everything he wants. From an early age, he has been instructed to behave this way by his father.
Gauche 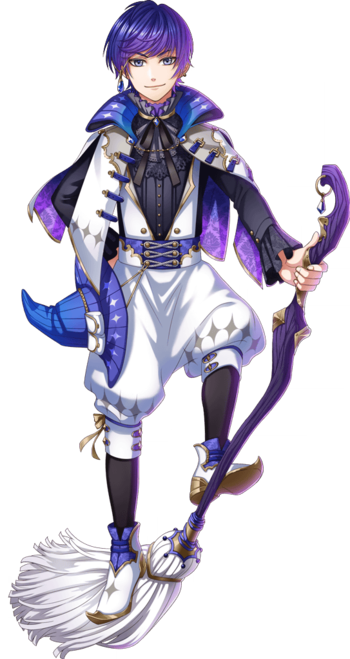 Country: Country of Rainbow - Oz
Age: 14
Gauche is a first-class magician - the witch of the West. Though he has a sassy personality and enjoys making fun of adults, he has a gentle side and delights in showing magic to the children of his city. He finds his older brother who lives to the east, Droite, irritating, because he cares too much. However, he respects Droite as a witch.
Guido

Guide version - Unawakened
Country: Country of Dance - Aim
Age: 28
A mysterious prince who hides his true face behind a mask. Guido holds himself with a gentlemanly manner and is always observing what is going on around him. His favourite flower is the mimosa.
Haku

After Story version - Unawakened
Country: Country of Books - Rivaille
Age: 25
Haku is a man of few words and and fewer emotions. He is said to possess no emotions at all. He spends a lot of his time reading in the forest, possibly due to the way he was mistreated by his hysterical mother.
Inui 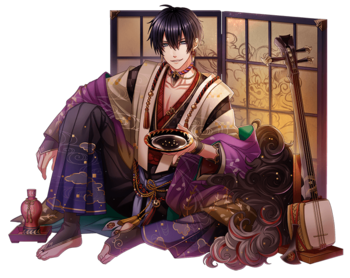 Banquet version - Moon awakening
Country: Country of Calendar - Kuyou
Age: 25
Inui is from the family of the Dog. His specialty is performing with the shamisen. He is an incredible strategist with a thirst for power, and boasts of incredible mental and physical strength. His overwhelming ambition means he hides his weaknesses from others. When he meets a girl he immediately offers them his hand and charms them into being his. Due to this, he is shadowed by many girls who refuse to give him up.
Juno 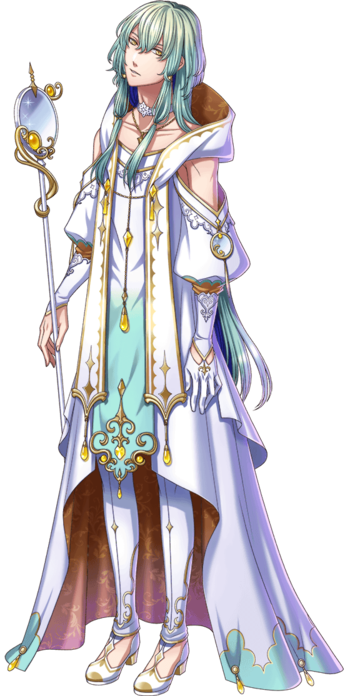 Country: Ephemeral Country - Aphros
Age: 21
Living as a conduit for God, Juno spends his days passing on messages to the Oracle. He normally has a friendly and gentle personality, but his tone and demeanour change drastically when God is possessing him.she was as pure and kind as he was thought she would be. But he only knows what God tells him about the future.
Kaede

Snow Moon version - Unawakened
Country: Country of Four Seasons - Hourai
Age: 24
A prince who manages the season of autumn. Kaede is a genius who demonstrates his talent in artistic fields, such as painting, sculpture, and architecture. He excels in sensitivity and his works attract many people, but he also has a delicate side.
Kalt 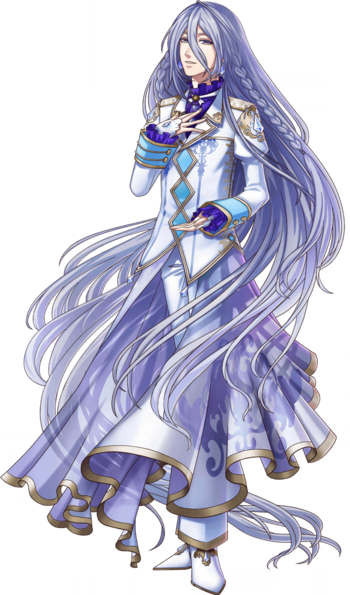 Original version - Moon awakening
Country: Country of Spirit - Secundati
Age: 22
Prince of the ice family of Secundati. Though he is silent, his heart is kind. He has a great level of magical power, and his body temperature is extremely low.
Las 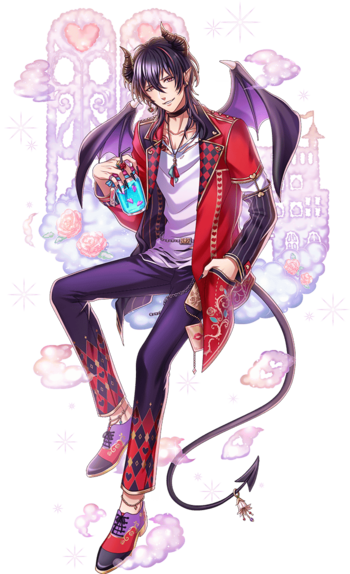 Dakimakura version - Sun awakening
Country: Country of Sinner - Votalia
Age: 27
Prison warden for prisoners who have committed the crime of 'Lust'. Though he is under the effects of a powerful lust curse, Las is a fundamentally gentle person. It's his principle to not refuse anyone who comes to him, and women flock around him due to his sensuality. He only believes the warmth he feels when embracing someone, and doesn't think he can love anyone from his heart.
Lied

New Year version - Moon awakening
Country: Country of Voice - Vox
Age: 20
Lied is the cousin of Stimma, Flu, and Rufen. He is exceptional, but has a spectacularly pessimistic view of the world. He spends his time observing things and composing music.
Lullus 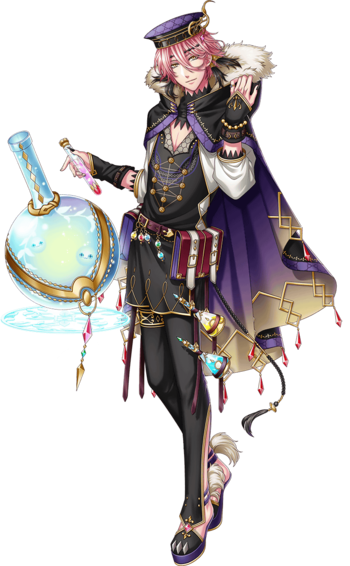 Original version - Moon awakening
Country: Country of Alchemy - Alchemia
Age: 25
Though people call Lullus a genius, he doesn't see himself that way. His ultimate goal is to refine 'The Elixir' and he spends all his time researching to reach that goal. There is a lot of pressure put on him by the rest of the royal family and he is under a lot of stress. He is childhood friends with the princes of Secundati.
Mad Hatter 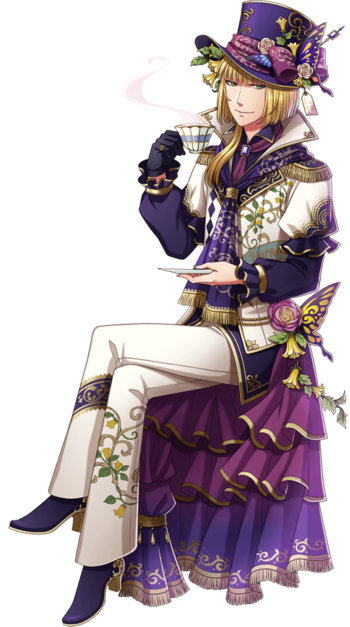 Original version - Moon awakening
Country: Country of Marvel - Wondermare
Age: ???
Mad Hatter runs a hat shop called Maison Madness. Though he asks a lot of odd questions, he just enjoys the play on words and is generally a gentleman. His dream is creating a flying ship. He has a history with Alice that he doesn't like talking about. Isn't above drugging his friends.
Orion 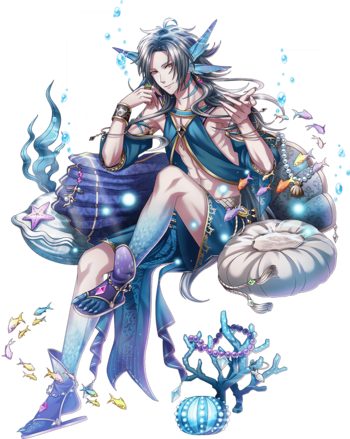 Adventurer version - Moon awakening
Country: Undersea Country - Aquaria
Age: ???
Orion always holds himself with composure, and he is used to getting what he wants, but he is fragile when he is refused something. He gets fired up when he faces resistance.
Raith

Rain version - Unawakened
Country: Country of Poison - Telsot
Age: 26
A free-wheeler who loves living in cheerful enjoyment, it is difficult to get Raith to do anything bothersome or menial. Anyone who listens to his violin playing becomes enraptured.
Roie 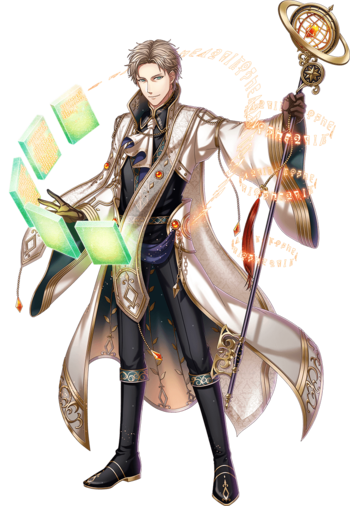 Records version - Sun awakening
Country: Country of Archive - Lecord
Age: 36
Roie's job is to maintain the records on world history. His desire for intellectual stimulation is strong and he doesn't mind where he gets that stimulation from. Because there is no recorded history of the Kingdom of Traumere, he is very interested in the information the Heroine can give him as the princess of Traumere. He doesn't like women, because he thinks women are illogical creatures. He will maintain interest in something for as long as he thinks he can learn from it, but as soon as he thinks he has exhausted it as a source he will drop it.
Sorbge

Country: Country of Ice Treats - Solitude
Age: 27
A prince with a narcissistic side, Sorbge views himself as one of God's chosen. His bolshy demeanour and speech belies his unexpectedly delicate heart. He often overindulges in alcohol. A messy drunk.
Will

Park version - Unawakened
Country: Country of Movie - Kenal
Age: 27
Will is a director of horror movies. He loves seeing people's faces becoming filled with fear, and especially relishes in the frightened expressions of girls. If he finds something that sparks inspiration for his work, he will immediately start taking notes on it.