This page lists the princes under the 'Cute' attribute in 100 Sleeping Princes and the Kingdom of Dreams.

In General
They are mostly cheerful and chirpy, always ready to indulge in conversation or be extremely attentive to the princess. Quite a number may exhibit rather child-like behaviour in the way they obsess over certain minute things in their lives which they deem as important. Most of the younger princes are in this group.
Acedia

Country: Country of Sinner - Votalia
Age: 22
Prison warden for prisoners who have committed the crime of 'Sloth'. He keeps everything he needs placed within reach of his bed, which can be a hassle. His work is done by issuing commands to his subordinates from his bed.
Aldebaran

Blessings version - Unawakened
Country: Country of Star - Pleia
Age: 21
Aldebaran is an active man who is fond of men and women of all ages. With a lively and positive personality, he is friendly and always has a smile on his face. His nickname is 'Al'.
Amano

Country: Country of Weapon - Akagura
Age: 28
Amano has a calm and serious personality. He wields a legendary bow which is said to be able to pierce into the country of God. While many of the countries of weapons actively and aggressively kill monsters, Amano doesn't kill more than is absolutely necessary.
Banri 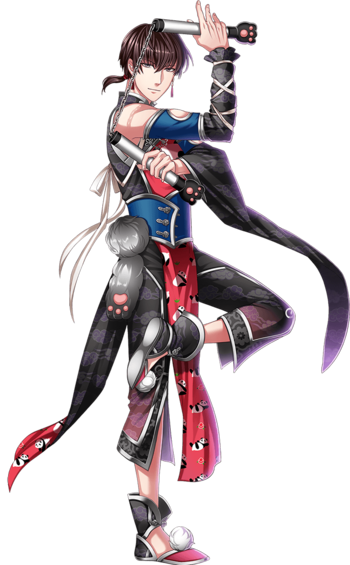 Original version - Moon awakening
Country: Country of Movie - Rakanboshi
Age: 22
Though Banri has made his fame as a kung fu action hero, he is actually an otomen (a man with traditionally feminine interests) with a deep love for panda themed goods. He hides this part of his personality as to not break his public image.

Country: Country of Marvel - Wondermare
Age: ???
Calling the Heroine 'Alice' and dragging her around Wondermare, Cheshire Cat is a bizarre prince who does his own thing. However, his manner can be enlightening about the secrets of the country. He loves teasing Chrono.
Corail 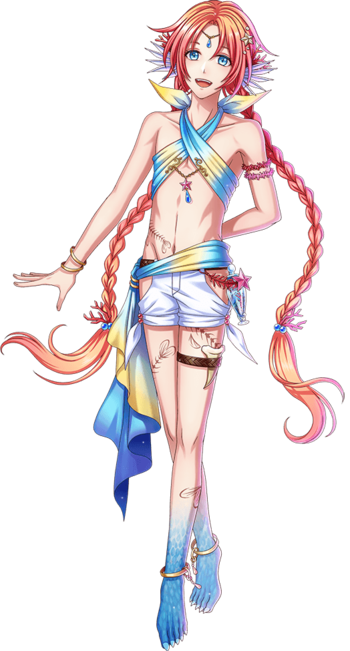 Adventurer version - Unawakened
Country: Country of Coral - Coralia
Age: 18
Behind Corail's bright and guileless personality, he hides a mischievous side which comes to the forefront occasionally, though he doesn't really remember these instances. He has a strong sense of responsibility as a prince, and works hard to protect his environment, especially the coral and the fish.
Droite

Casino version - Unawakened
Country: Country of Rainbow - Oz
Age: 19
Droite is a first-class magician - the witch of the East. He is susceptible to being misunderstood by those around him because of his somewhat aggressive personality, but he's actually very kind. He is searching for a woman he can cherish. Droite dotes heavily on his brother who lives to the West, Gauche.
Grad 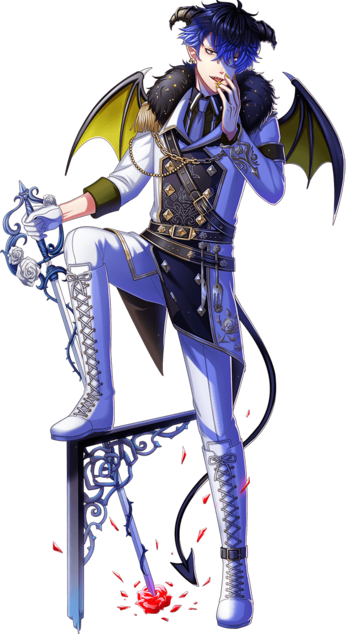 Masquerade version - Sun awakening
Country: Country of Sinner - Votalia
Age: 23
Prison warden for prisoners who have committed the crime of 'Gluttony'. Of course, he isn't interested in love, because his only interest is food. Though he has a casual air and a reticent personality, he is strangely compelling due to his insistence on going his own way.
Hanare 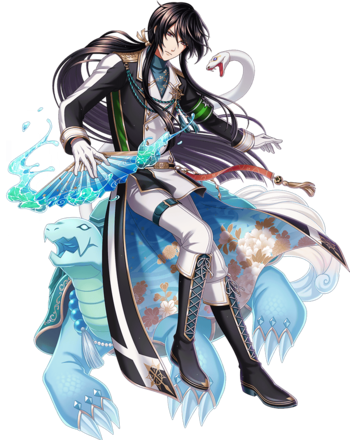 Raiment version - Sun awakening
Country: Country of Calendar - Kuyou
Age: 19
Hanare is from the family of the Boar. Though he is a male dancer, he specialises in traditionally female dances. He has very stable emotions, and he is usually close to expressionless. He has the ability to see through to the truth of things, but is unaware of this ability himself. He is often misunderstood by people around him due to his tendency to speak whatever is on his mind.

Yuri on Yume100!!! version - Unawakened
Country: Country of Star - Olympus
Age: ???
Hercules has a bright and amiable personality, but has Herculean strength capable of destroying mountains. He is always with his lion, Nemea. His stepmother is after his life.
Kaine 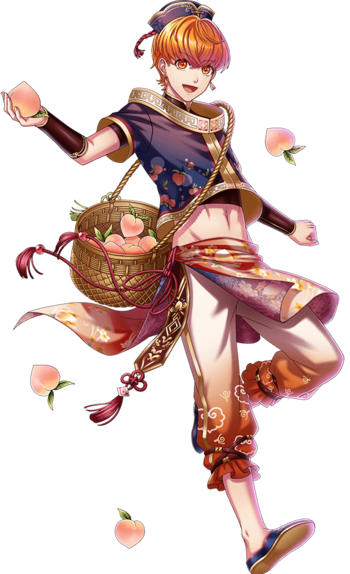 Peach version - Moon awakening
Country: Country of Peach Blossom - Perche
Age: 16
With six older sisters that he cares about deeply, Kaine may appear timid at first sight, but he is actually rather strong. He worries about his lack of muscles and short stature, though.
Kanoto

Country: Country of Calendar - Kuyou
Age: 17
Kanoto is from the family of the Rooster. He is talented at playing the flute. He was raised carefully inside the castle - in order to prevent his leaving the castle he has never once seen a woman. Because of this, he has a pure and gullible personality, and he is ignorant of the ways of the world.
Legrange 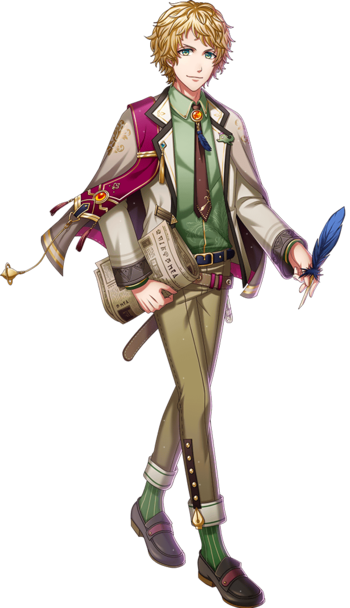 Records version - Unawakened
Country: Country of Archive - Lecord
Age: 23
Legrange manages the genealogy records of the world stored in Lecord. He has a bright and gentle personality, with a delicate side. If he reads a particularly moving story in someone's family history - both happy ones and sad - he is susceptible to crying, though he gets upset if anyone points this out.
Leonie 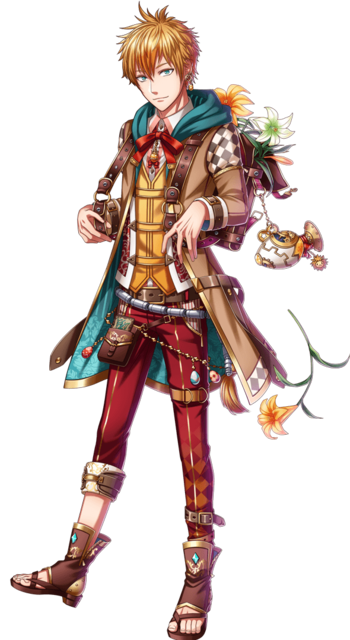 Easter version - Unawakened
Country: Country of Rainbow - Oz
Age: 22
Though Leonie wants to be wild and act without abandon, he lost the courage that he received in Oz. He blames his cowardice on this loss, and believes that if he can find this courage he'll be able to act as wild as he wants.
Lid 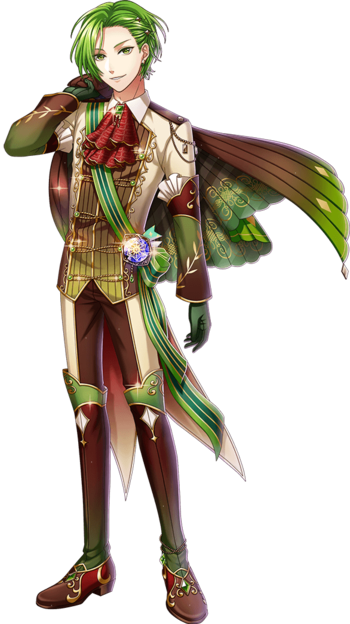 Gems of Snow version - Sun awakening
Country: Country of Jewel - Oliverite
Age: 20
Cheerful and positive, with a talent in taking care of those around him, Lid is close to his older brother, Callan. However, he also has a certain complex about him.
Lyon

Oath version - Unawakened
Country: Country of Flower Fairy - Virastin
Age: 13
Prince of the family of Dandelion in Virastin. He has a fluffy atmosphere around him, with a cheerful and carefree personality. He can fly through the sky by hanging onto a dandelion clock.
Makoto

Original version - Moon awakening
Country: Country of Magic Science - Daten
Age: 18
The former prince of Daten, which has transitioned from a monarchy to a presidential system. He enjoys seeing the suffering faces of others. At the time the country transitioned to the presidential system, the royal family was killed in a conspiracy, leaving him as one of the only survivors. He lives only for revenge against those who destroyed his family. His cousin, Sky, supports him while he stays in hiding.
Micaela 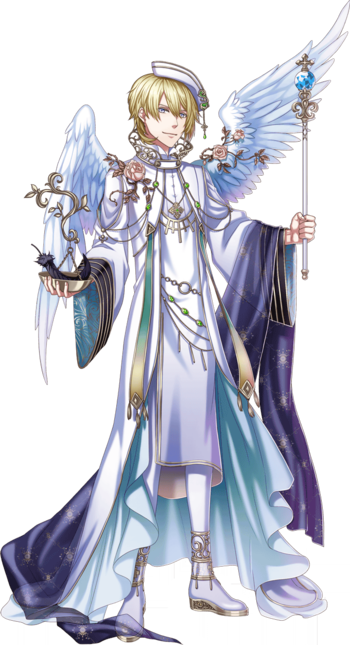 Original version - Sun awakening
Country: Country of Judgement - Arbitro
Age: 25
Micaela is Lecien's younger twin brother. Though he is good at the work that requires people to rely on him, he loathes cleaning his room. He became unable to speak properly to his brother after an incident in their past.
Michiru

Country: Country of Blessing - Buldrome
Age: 16
Quiet and kindhearted, Michiru is capable of hearing the innermost thoughts and desires of a person's heart. He always carries around a birdcage.
Million 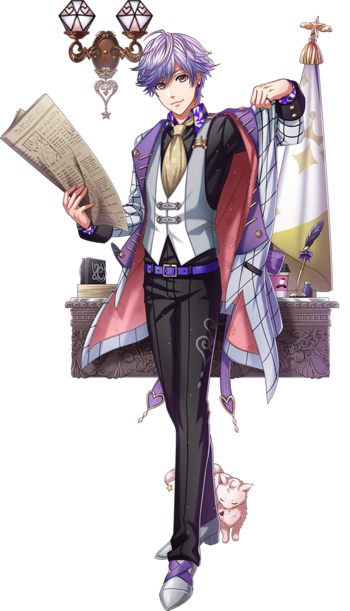 Records version - Moon awakening
Country: Country of Splendour - Sincea
Age: 22
Million has a black-hearted personality, but hides it under an affable facade. He has a put-together appearance and an amiable smile, and is focusing his efforts towards recovering his country.
Miya

Original version - Moon awakening
Country: Country of Sorcery - Soltiana
Age: 18
The younger of the two princes of Solitania (Iria is his older brother), Miya has a bright and cheerful personality which lets him befriend the people of his country with ease. He follows after Iria, but harbours a bit of a brother complex.
Nero 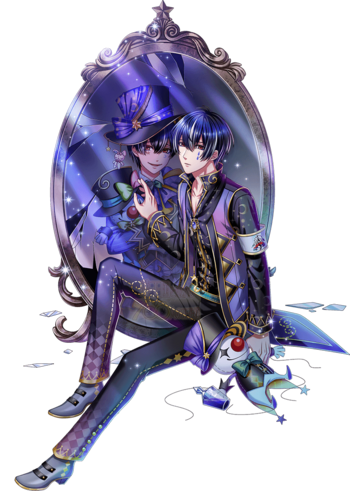 Longing version - Moon awakening
Country: Country of Aspiration - Circo
Age: 18
Second eldest prince of Circo. Nero is the ringleader of his circus troupe, and performs as a clown. He enjoys going on tour to other countries with the children in his troupe, and has a deep mutual trust with them due to his kindness. He loathes adults due to a traumatic incident in his past, and wants to create a world populated only by children.
Peco

Country: Country of Black Tea - Orangette
Age: 13
Peco is an extremely sheltered and innocent prince. Due to his being an asthmatic, premature baby he has been kept inside the castle for the majority of his childhood. Even though he is now healthy, the people around him worry excessively about him.
Procyon

Star Showers version - Unawakened
Country: Country of Star - Canes
Age: 8
Procyon is able to distinguish between a good and bad person by their scent. He is a friendly child and was raised beloved to everybody around him. He is close to his cousin, Sirius. Recently, his baby brother was born.
Prytwen 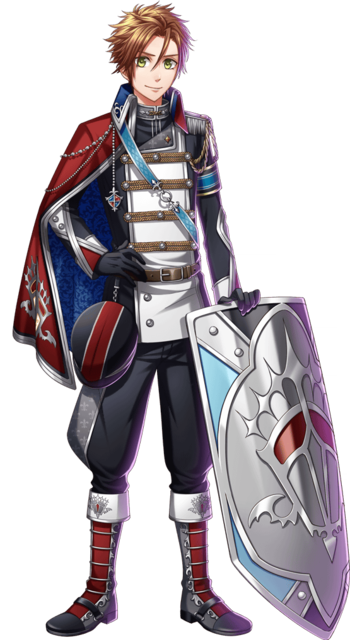 Country: Country of Weapon - Avalon
Age: 25
Together with his younger brother, Caliburn, Prytwen commands the soldiers of Avalon and defeats the monsters threatening their country. He is serious, with a strong sense of justice, and is trusted deeply by the people around him. While his public persona is perfect, there is a side to him that is unfamiliar with romance.
Riel 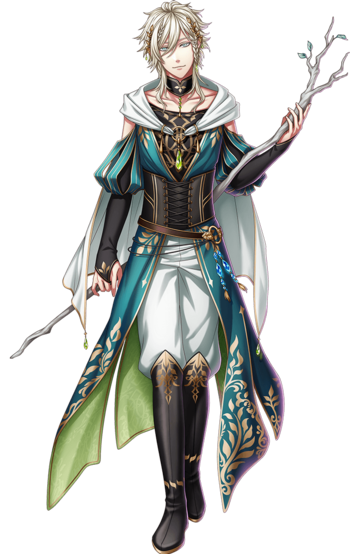 Country: Country of Forest - Hyule
Age: 24
Riel has grown up in the forest, side by side with the spirits that live there. He has a gentle and kind disposition. For some reason he holds a strong conviction that he will not allow violence. However, when he is angered once, he loses himself in his anger.
Ritz 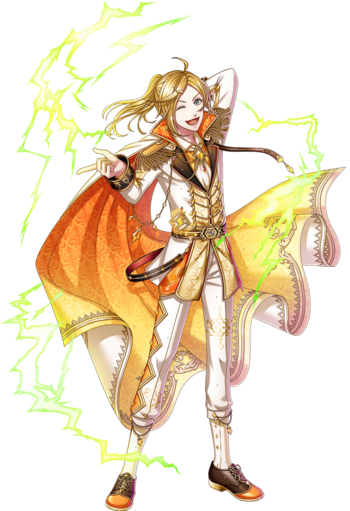 Sentai version - Sun awakening
Country: Country of Spirit - Secundati
Age: 24
Ritz spends every day enjoying himself. He is doted on by his grandmother and he cares for his family more than anything. He isn't very serious, however, and he is easily misunderstood.
Rolf 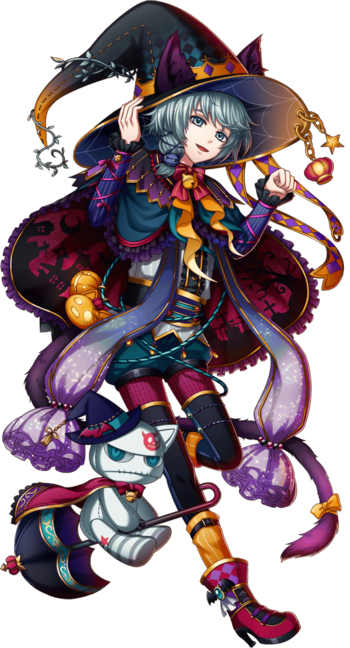 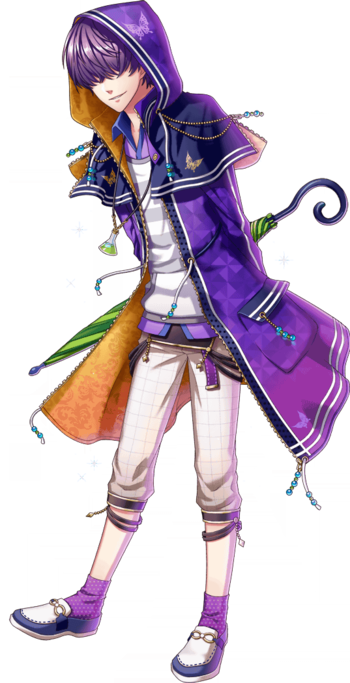 Rainy Day version - Sun awakening
Country: Country of Poison - Morfan
Age: 27
Sakia's fringe always hide his expression. He loves research and making poisons, and he has his own personal laboratory within the castle. Many people in the palace find it strange that he spends so much time inside his lab; he often gets so engrossed in his research that he forgets to eat and sleep. Ever since he was young, he has had trouble with communicating with others.
Schnee 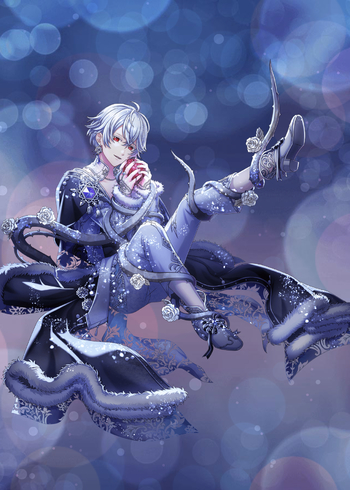 Luscious Love & Crime and Punishment Version, Sun Awakened
Country: Country of Snow - Snowphilia
Age: 15
The third prince of Snowphilia. His older brothers are Frost and Graysia. Schnee was spoilt by his family while he was growing up and as a result he has a mischievous side, and will not hesitate to use people to get his way. Even if a person he is disagreeing with is bigger than him, he will butt heads with them also without hesitation. Though his tongue is naturally sharp, he isn't malicious.
Toni

Dream Ship - Sun awakening
Country: Country of Thief - Rogue
Age: 17
Toni is quite skilled with his hands, and is good at doing things like picking locks. He doesn't really act like a prince so he easily blends in with civilians. He loves causing mischief with his sleight of hand.
Vega

Country: Country of Star - Galassia
Age: 19
The prince of Western Galassia. Though he has a beautiful and lovely figure with feminine mannerisms, he is tenacious when determined to conceal something. He worries about Altair, the prince of Eastern Galassia.