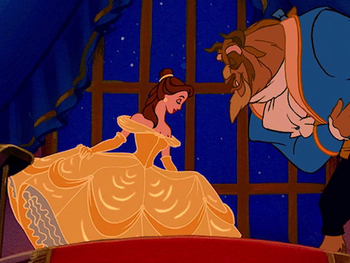 "Oh, my god! Belle is the greatest character I've ever seen in my life!" She's all into reading, when all the other girls are into fainting at the sight of muscular men. I fainted at the sight of a muscular man once! But that was after he punched me. So she has an adventure in this magic castle with talking clocks and dancing food. And the castle is ruled by this monster. I mean he's not only cursed to look like a monster, but he's also a big jerk..."

Characters from Animated Films that are so awesome!