These are the people who give you contracts, which include bank heists, robberies, and other weird items that a contractor might want, all in order to get your Payday, too. As of December 2017, the game got a serious story arc, and as such, there's some major Late Arrival Spoilers for those who are new to the game. Spoilers are marked as such, but there's a few characters on here that are considered Walking Spoilers, so their pages will be full of spoiler tags, so be warned! 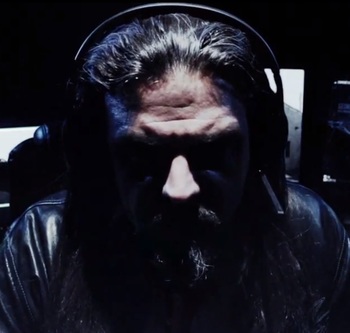 Guys, the thermal drill. Go get it.
Portrayed By: Simon Viklund (voice), Digger Mesch (The Web Series)
The crew's enigmatic boss, Bain is the man with a plan, who coordinates the crew's work through Crime.net. Everything about him is a mystery, with few having ever seen his face, let alone heard his name. Even the crew is in the dark about much of his past - all they know is that he's reliable, he's on their side, and he's in control.
Vernon Locke 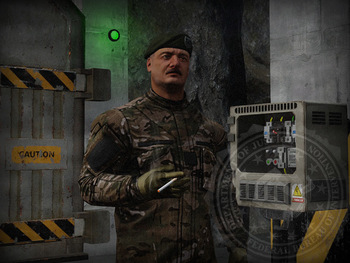 For sure!
Portrayed By: Ian Russell

Vernon Locke was introduced in a 'teaser' update for PAYDAY 2, whose heists were released as part of the Point Break tie-in DLC.

He is the head of a cyber-taskforce division of Murkywater that managed to successfully infiltrate Crime.net, but instead of simply taking it offline (as he was hired to do), left a message for the crew within Crime.net that states he would like to work with the crew, offering to provide intel on Murkywater and protection from the other members of his taskforce.

Born in South Africa, educated at Lincoln Laboratory, trained under MI5, and now employed by Murkywater. Vernon Locke heads their special cyberwarfare division, which has been tasked with infiltrating and destroying Crime.net. Locke has managed this. However, being a mercenary with no loyalties that extra money couldn't bend, Locke sees this as an opportunity. An opportunity to get rich, and cause a little chaos. He has reached out to Bain and the Payday gang. The deal? Work with him, or he brings Crime.net down forever. Locke's jobs are direct hits on Murkywater's resources, favouring speed and violence over subtlety, with the Gang often moving from place to place rather than holding out at a single point. Also, fair warning, Locke has entered Walking Spoiler Territory. Hence the huge amount of spoiler tags everywhere... 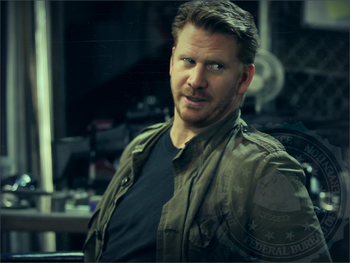 Portrayed By: Dash Mihok
You can't exactly buy fully-automatic, high-capacity weapons from just any gun store or gunsmith, and you don't find them lying around on the street. Gage is a bitter and crippled war veteran who provides some of the tools and weapons the gang needs to get the job done, using his contacts and connections within the military. He also occasionally takes 'care' of problems for Bain, using his injury to make victims underestimate him.
Advertisement:
Vlad 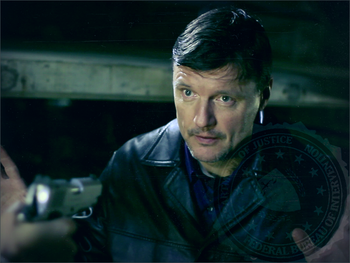 Like a fucking Sputnik!
Portrayed By: Ilia Volok
Recently returned from a long stay in prison, Vladislav "Vlad" Kozak seeks to reclaim many of his old holdings - and wants revenge on the man who framed him. To do this, he's taking back his gangland stranglehold on DC, starting with his protection racket. Vlad also runs a bakery in town, which serves as a front to his more illegal means of business.

With the exception of the two-day Goat Simulator heist, Vlad's contracts are all single-day heists (not counting escape sequences). Early jobs offer some opportunities for stealth and subterfuge, but later ones focus entirely on loud and violent approaches. He has also been the contractor for the yearly Christmas-themed heists* Except for 2017, as Locke offers that particular contract, due to the storyline getting serious.
Hector 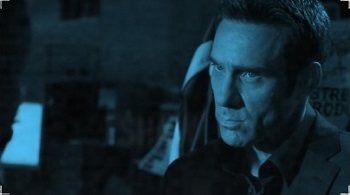 Hurry, you have no time!
Portrayed By: Tim Simmons (voice), Gary Daniels (The Web Series)
The leader of the up-and-coming Sinaloan Cartel, Hector Morales is looking to deal with his rivals, the Mendoza Family, so he can secure distribution of cocaine and methamphetamine. He doesn't care how they are dealt with. He just wants them out of the picture. One of the most intimidating things about him is that he has no previous criminal record - he's never once been caught.

Hector's heists focus mostly on action and stealing highly valuable items like money, drugs, and weapons, but there are some opportunities for stealth.
The Elephant 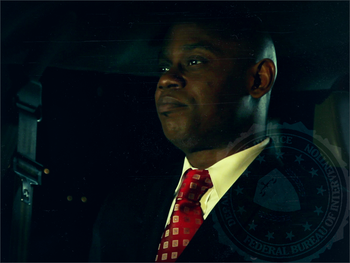 Gentlemen.
Portrayed By: Bokeem Woodbine
A Republican councilman, Stephen J. Simmons, AKA "The Elephant," aspires to be a senator - and uses Crime.net as a means to that end. He is not above paying to have his rivals discredited or 'problems' taken out of the picture in a more permanent fashion. Whether it's vote manipulation, frame-ups, or aid for his political allies, he has the connections to make it happen.

The Breakin' Feds heist reveals that he has been arrested by the PAYDAY Task Force, as part of Solomon Garrett's deal with the Kataru. It is also implied he is looking for Baldwin's Lament, like Bain. He is later released after 37 days in custody, presumably due to a lack of hard evidence linking him to the gang, combined with his political connections.

His heists strongly encourage stealth and caution, and while highly difficult, they are extremely rewarding. The Biker DLC introduces a heist from him that can only be done loud, which contrasts from his usual stealthy approach, though he notes that there was no other option given the circumstances, and is largely unconnected to his political goals.
The Dentist 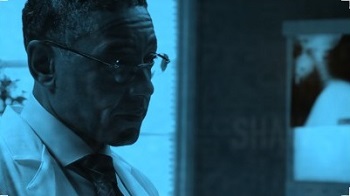 I'd wish you luck, but luck has nothing to do with it.
Portrayed By: Giancarlo Esposito
Not much is known about Doctor Helmann, a.k.a. The Dentist, but he knows the crew very well - after all, he's been monitoring them ever since they robbed the First World Bank. The Dentist uses his occupation to present the image of an honest, working citizen, but behind that mask breathes a cunning and dangerous criminal mastermind. After his "introducing" himself to Dallas, he gave the crew an offer - work for him, and Hoxton will be freed. He seems to be working with the people that kidnapped Bain, as the box you stole from Golden Grin appears in the Henry's Rock heist, along what seems to be him next to a tied up Bain.

The Dentist has a network of connections that rivals The Elephant's, and uses them to great effect during his Heists, which typically require careful planning and precise execution.

He is also older than he looks. A lot older.
The Butcher 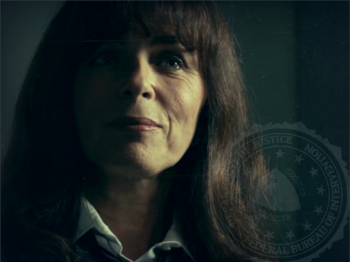 I have a problem.
Portrayed By: Mira Furlan
Denisa Horvat is a woman running a butcher shop in Croatia, better known as The Butcher. Similar to Vlad, the Butcher runs a legal business while doing more dirty work behind the scenes - in this case, the international arms trade. Not much else is known about her other than that she has a connection to Bain and is filling in for Gage while he's on an "extended vacation." She is also responsible for Dragan joining the crew, with him serving as her ambassador to Crime.net.

She came with two heists initially, The Bomb: Dockyard (which could be played stealth or loud) and The Bomb: Forest (which could only be played loud), along with being the supplier of three weapon packs: the BBQ Pack, AK/CAR Mod Pack and Western Pack. After a long hiatus, she got a third heist in December 2016: Scarface Mansion, another stealth-or-loud heist. One of her cargo ships ends up in Alaska during the Alaskan Deal heist, and she is not exactly happy about what ends up going down there.
Advertisement:
Jiu Feng 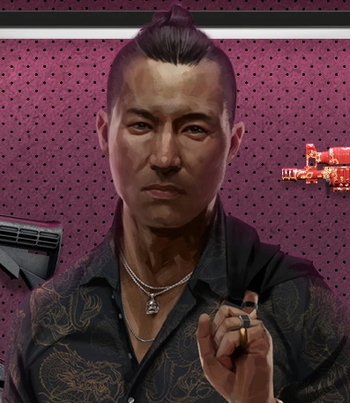 Portrayed by: Andrew Leung
A weapons smuggler and former member of the Golden Dagger triads, Jiu Feng was introduced to the gang through Joy. 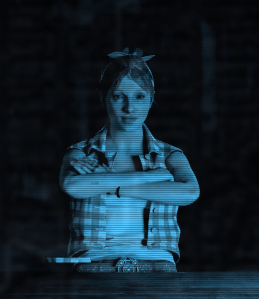 Portrayed by: Unknown
Gemma McShay is a Texan weapons smuggler.

Currently, Gemma is featured in the "Texas Heat" campaign, the first heist of which has you hitting Esteban, ranch-dwelling underling to an unknown rival muscling in on Gemma's gunrunning trade.