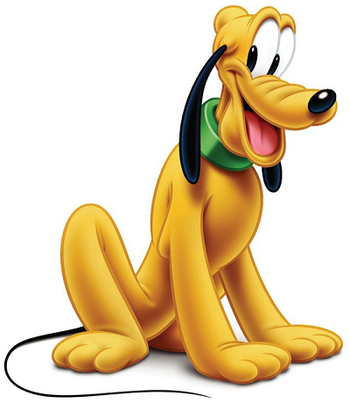 Mickey's ever-faithful canine pal. Mickey's often described Pluto as his best friend, and the bond the two share is nothing short of strong. 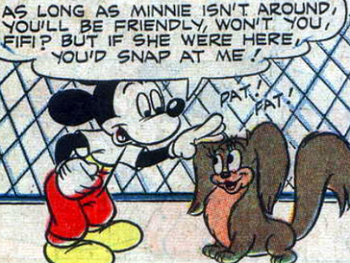 A Pekinese dog owned by Minnie and a love interest of Pluto. 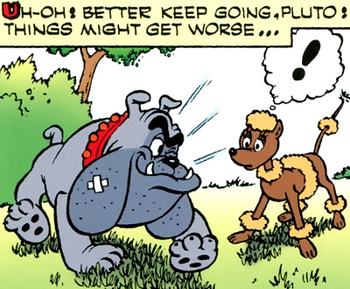 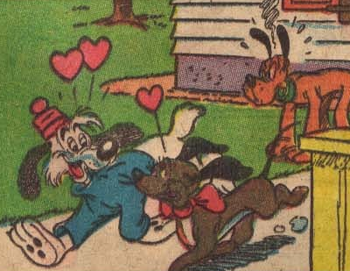 A dachshund who is a love interest of Pluto, Butch, and Boffo. 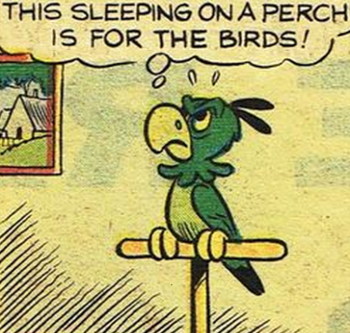 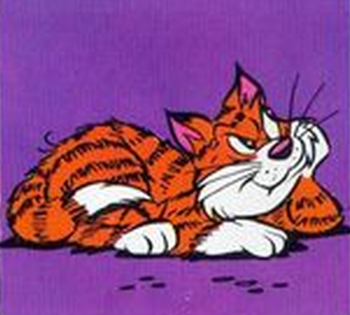 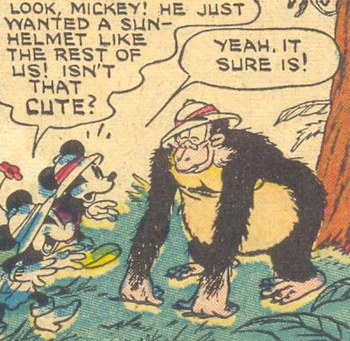 A gorilla associated with Captain Churchmouse. He was previously known as Bombo. 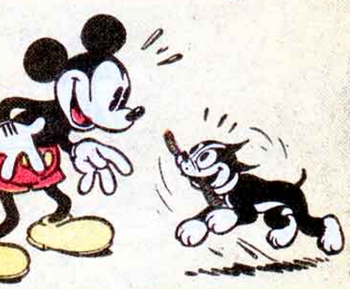 A Boston bull terrier who lives in Pluto's neighborhood. 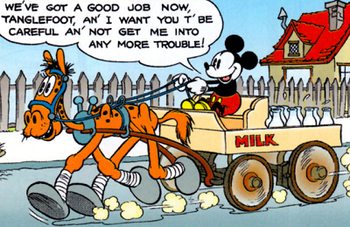 Mickey's horse, sold to him by two con men who presented him as a champion race horse (they'd actually bought him from the glue factory). Sweet and good-natured, but not terribly bright, and for the most part not terribly fast — unless he gets scared of something, then he turns into a speed demon. 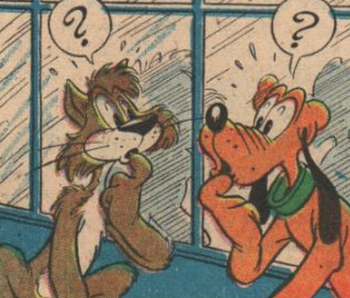 A tough street cat who regularly gets into trouble with Pluto and Ellsworth. 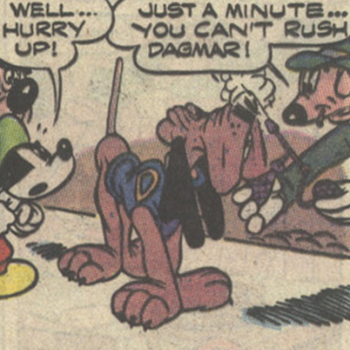 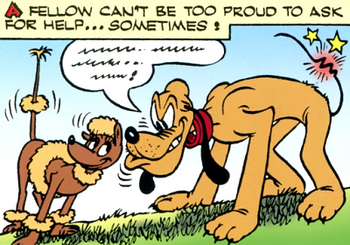 A poodle owned by Minnie and a love interest of Pluto and Butch. 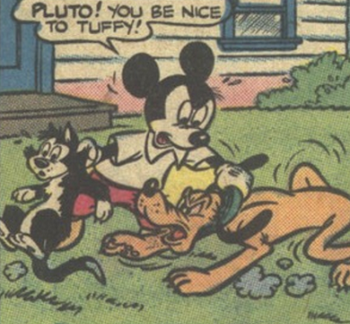 A black-and-white cat who is friends with Scrags. 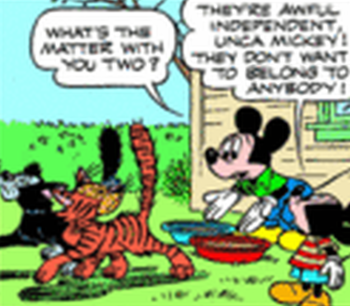 An orange, striped cat who is friends with Tuffy. 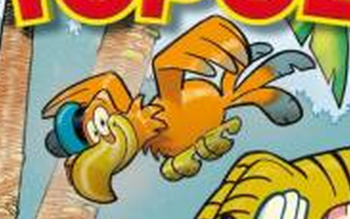 Jeremy's parrot he acquired in China. It accompanies him wherever he goes. 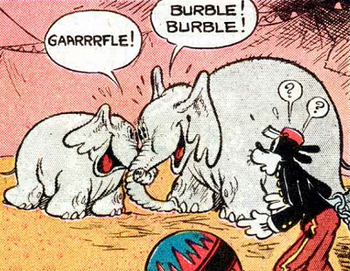 A baby elephant originally purchased by Eli Squinch that through circumstances came into Mickey's possession. It was finally reunited with its mother and sold to the circus she's part of. 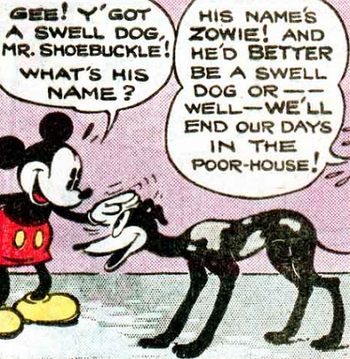 The Shoebuckle's dog and the fastest canine in Mouseton and its surroundings. He's a friend of Pluto. 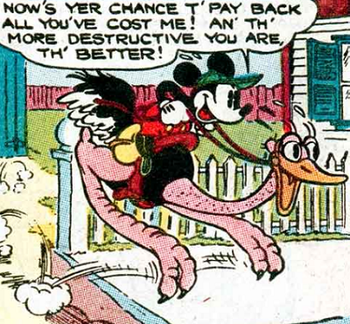 Officially named Giovanni, Mickey came to temporarily own the ostrich shortly after he escaped his owner, Tony Dinero. Tony was just in the process of ridding himself of the destructive ostrich by sending him to one "Oscar". Mickey saw the name on the label and went with as the ostrich's name. 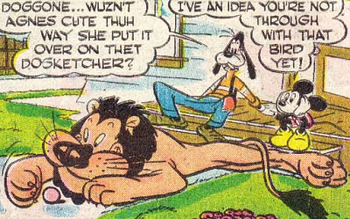 A lion Goofy bought from the circus and later sold her and her cubs to another when it was in her best interest. 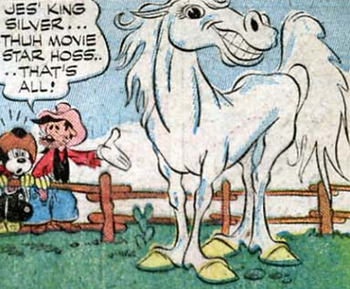 A movie star horse that came into Mickey's possession when he pretended to be Billy the Mouse. Billy's saved the life of a horse thief, Jake, four years prior and King Silver was his means of thanking Billy for that.

A former circus dog that was taken in by Pluto. 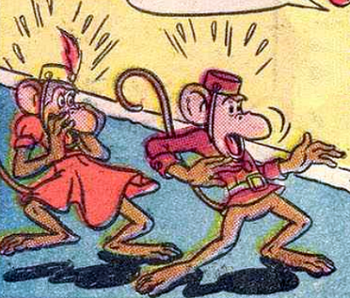 Two monkeys that belong to Morty and Ferdie. Jocko used to be owned by Tony, the organ grinder, until he retired. Jockette's origins are unknown because she came home with Jocko one day. However, she must have a similar history as a performer. 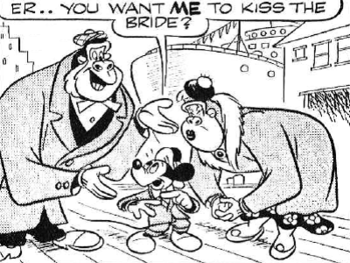 A college-educated gorilla that was the pet and colleague of Maxwell Mouse. He lived with Mickey for a time thereafter, during which he and Magnolia, a zoo gorilla, met. They went out on their own once they got married. 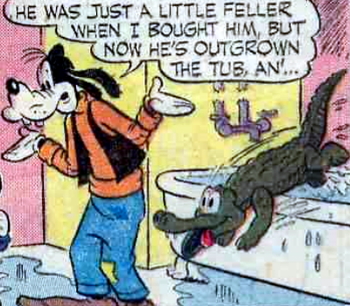 An alligator Goofy bought when it was little. 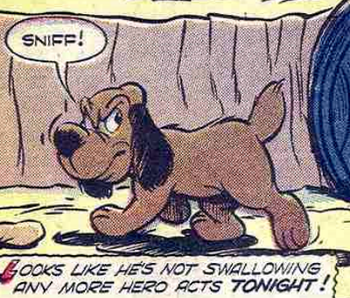 A puppy owned by Minnie. 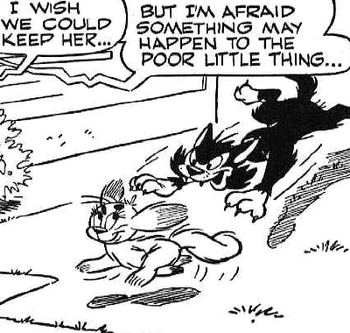 A Pekinese dog that belongs to Mademoiselle Clou-Clou, owner of the Bon-Bon Bonnet Shoppe. 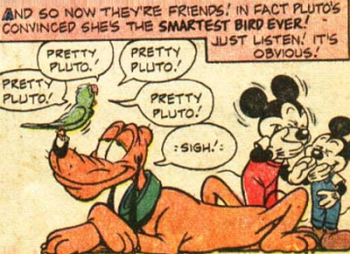 A parakeet owned by Mickey. 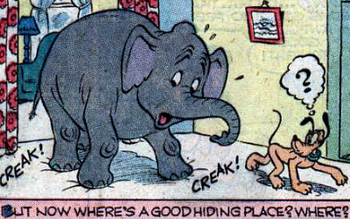 First appearance: "An Elephant's Best Friend Is His Dog", 1956
Marty and Milty 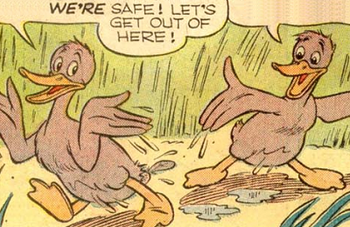 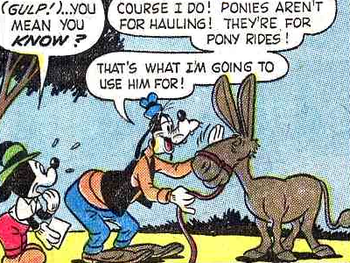 A mule Mickey bought for Goofy after he repeatedly failed to win a pony in contests.