The Ptolemaic Army returns from Metal Slug 5, this time expanded and divided up into multiple factions:

During the events of Metal Slug Attack, the main Army rebels against the Cult, becoming the Rebellion. The outcome of this Civil War is not yet known, and where Anastasia's forces fall in this conflict is also not yet known, though she and her sect are not loyal to the Cult.

As A Whole
Dragunov

A commander of the Ptolemaic Army.
Yoshino

A mechanic of the Ptolemaic Army. Caroline controls the F-502 ShootingRay(a miniature remote-controlled version of the plane boss from the second mission of Metal Slug 5). She later controls a miniature version of the Jupiter Queen. Later on, she pilots her own variant of the Augensterm, in red.

A member of the Ptolemaic Special Forces.
Sisilia

A member of the Ptolemaic Army Supply Corps who always holds and plays her trumpet.
Towa

A mechanic of the Ptolemaic Army. Originally an independent, she was forced to join after being caught stealing the army's supplies.
Simon

A sniper scouted by Dragunov.
Miharu

A wandering mercenary who joined the Ptolemaic Army after Yoshino improved her combat skills as her student.
Chunyan

A daughter of a famous chef who was rescued from an assailant. She was invited to join the army but not for her powers.
Owen

A commander of the army's guerrilla forces returning from a long campaign.
Sho

A member of the Ptolemaic Animal Squad division. Rides a frog-like vehicle.
Phoebe 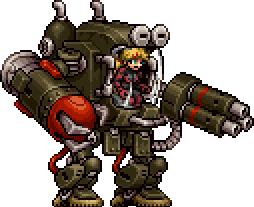 A corporal in the Ptolemaic Army, Phoebe is a skilled combat pilot who was transferred to the development division to help Caroline and Towa test new machines by Dragunov.
Josette

A member of the Ptolemaic Gorilla forces who dons a special Unit suit.
Mizuna

A ninja of the Ptolemaic Army.
Matilda

One of Miharu's "best" pupils...or so she says, she most likely spied on her and copied her combat style, as Miharu did not recall training her.
Little Lady Black 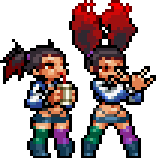 An A.I. created by Caroline and made sentient with a rough personality upon meeting scary teachers and rough leaders. Little Lady Black controls and inhabits a Black Hound and, thanks to the tank's camouflage technology, can alternate between her hologram and tank forms.
Svetla

A Special Forces soldier who operates the GIP-03 Bergenia.
Humphrey

An elite soldier of the Special Assault Force who was once a member of the Red Goblin Society when it was destroyed.

A high ranked wizard of the Ptolemaic Army. A target of suspicion by the Masked Soldiers due to her powers.
Maria

The new captain of Ptolemaios' group of knights.
Sally

Another soldier experimented and controlled under Mira's command.
Cara

Mira's assistant. While doing a task for Mira, she went into her private quarters and touched a mysterious stone, which transformed her in a manner similar to Sally. 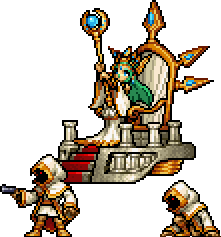 A priestess of an unknown sect. Joined forces with Ptolemaios as to protect their hidden treasure.
Beecham 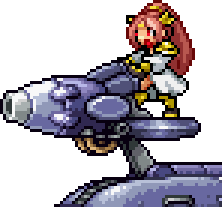 One of Anatasia IV's trusted confidants. She drives a large vehicle called the "Gildron".
Anastasia I

Anastasia IV's great-grandmother from the past and founder of the Sect.