Characters / A Song of Ice and Fire - House Tyrell

This is a listing of members of House Tyrell who appear in A Song of Ice and Fire. 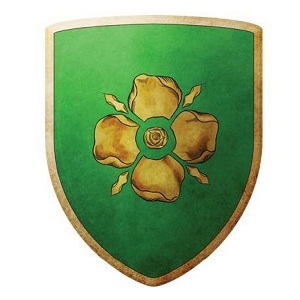 The Lords Paramount of the Reach and Wardens of the South from their flowery seat at Highgarden. Originally, the Tyrells were stewards to the reigning Gardener Kings, but after Aegon I Targaryen wiped out the last of the Gardeners, the Tyrells yielded the castle up to him. The Conqueror rewarded them by naming the Tyrells overlords of the Reach, even though there were likely Houses with better lines of descent. The current Tyrells are a rich and powerful house, but their patriarch Mace Tyrell is a fat oaf. Though they started out the series by allying with Renly, they eventually went over to House Lannister. They are extremely popular with the smallfolk of King's Landing. Their sigil is a golden rose on a green field.

Before the fall of the Gardeners, the Tyrells were a knightly house who became the High Stewards of Highgarden for the Kings of the Reach note a job that Gareth Tyrell and his son Leo did so well, that the Gardeners made it hereditary. There were counted occasions where the Tyrells momentarily ruled the Reach as regents in place of the Gardeners in absence, being the only noble house from the Reach ever to do so. It is not stated whether the Tyrells had a keep or had claims to lands before Aegon the Conqueror. The Tyrells claim descent from Garth the Gardener through the female line, having married to an Andal Tyrell knight in service to the Gardeners.

Lord Mace Tyrell, Defender of the Marches, High Marshal of the Reach, Warden of the South, Hand of the King 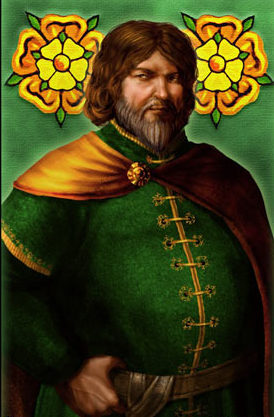 The patriarch of the Tyrell family and current Lord of Highgarden, Mace is a Fat Idiot who lacks political savviness and has a reputation for being somewhat of an easily-manipulated buffoon. He does, however, have high political aspirations for his family and tries to work to better their position. He is married to Alerie Hightower.

Wife of Mace and mother of his four children. She is the third child of Lord Leyton Hightower.

"Willas has a bad leg but a good heart."
—Margaery Tyrell

The unmarried heir to Highgarden and Mace Tyrell's oldest son, currently tending to it while the Tyrells are in King's Landing. Willas once rode against Oberyn Martell in a tourney; the incident left him crippled after his foot caught on the stirrup and pulled his horse on top of him. Nevertheless, Willas isn't bitter, becoming pen pals with Oberyn as well as devoting his time to scholarly activities; he has garnered a reputation as being an excellent animal breeder as well as an intelligent man.

See the The Kingsguard page. 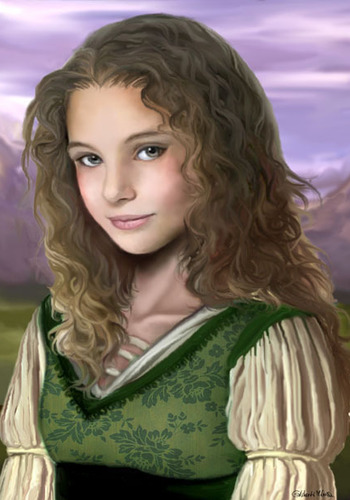 "Margaery was different, though. Sweet and gentle, yet there was a little of her grandmother in her, too."
— Sansa Stark

Mace Tyrell's youngest child and only daughter, Margaery is introduced as being married to Renly Baratheon to cement their families' alliance. She comes to King's Landing in the third book. Margaery is beautiful, charming, and would admittedly make a very good queen - something she and her family is very aware of.

For the House Baratheon of King's Landing, see here. 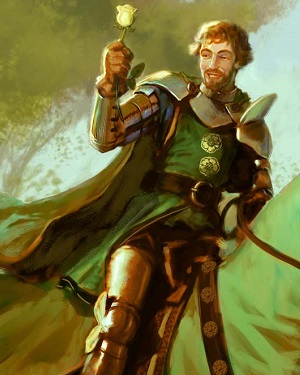 "A valiant deed unsung is no less valiant."

Second son of Mace Tyrell and Alerie Hightower, Garlan is a better swordsman than his younger brother Loras but lacks Loras' desire to be famous, instead preferring settling down happily with his wife Leonette Fossoway. Following the Battle of the Blackwater, where Garlan plays a key role, he is given Brightwater Keep, the ancestral castle of House Florent (who have been attainted), the Tyrell's chief rivals, along with its lands and titles, making Garlan a powerful lord. His personal coat-of-arms is two golden roses on green, to represent his status as a second son.

Wife of Lord Garlan. The specific branch of Fossoways she is from is unknown.

The late Lord of Highgarden and father of Mace, Janna, and Mina. He was brother to Maester Gormon, Garth and Moryn.

The Queen of Thorns 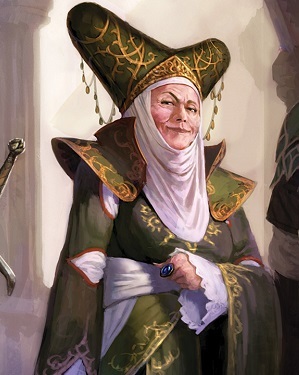 "All men are fools, if truth be told, but the ones in motley are more amusing than the ones with crowns."

Mother to Mace Tyrell and his sisters, Janna, married to Jon Fossoway, and Mina, married to her cousin Paxter Redwyne, daughter of Runceford Redwyne, and grandmother to Willas, Garlan, Loras, and Margaery, Olenna is a cunning old woman who has her son's political aspirations and the brains to act on them.

The Lord Seneschal of Highgarden and second brother to the late Luthor Tyrell and uncle of Mace. He has two bastard sons: Garse and Garrett Flowers.

The youngest brother of the late Lord Luthor and uncle of Lord Mace. Also, the father of Leo "the Lazy", a Novice at the Citadel. 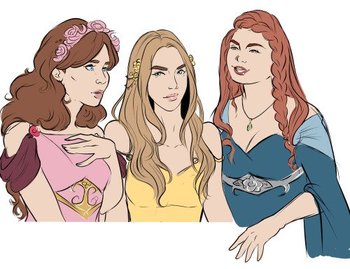 Margaery's cousins who accompany her to King's Landing. Alla is the daughter of Ser Leo Tyrell, himself son of Mace Tyrell's distant cousin, Ser Victor Tyrell, and Alys Beesbury.

Elinor is the daughter of Theodore Tyrell, himself son of Ser Luthor Tyrell, the son of Moryn, by Elyn Norridge, and Lia Serry and cousin to the main line of the House. She has a brother, also named Luthor.

Megga is the third child and only daughter of Ser Olymer Tyrell, son of Mace's distant cousin, Ser Quentin, and Lysa Meadows and cousin to the main line of the House.

Alla Tyrell is the eldest daughter of Ser Leo Tyrell and Lady Alys Beesbury. She is a granddaughter of Ser Victor Tyrell, the latter being a cousin of Lord Mace Tyrell.

See the Order of the Maesters page.

The fool and jester of House Tyrell. He's part of the Tyrell entourage at the Red Keep.

A young and handsome singer attached to the Tyrells. Dressing all in blue, he dyes his curly, shoulder-length hair blue in the Tyroshi fashion

An Andal knight and the founder of House Tyrell, who served under King Gwayne V Gardener

Lord Harlen Tyrell, the Warden of the South

The Lord of Highgarden during the Dance of the Dragons and the Conquest of Dorne.

Leo Tyrell, known as Leo Longthorn, was Lord of Highgarden and head of House Tyrell during the reign of Daeron II Targaryen.