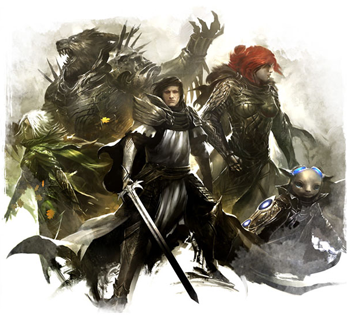 "Learn now the lore of Living Creatures!
First name the five, the free peoples:
Eldest of all, the elf-children;
Dwarf the delver, dark are his houses;
Ent the earthborn, old as mountains;
Man the mortal, master of horses;
And half-grown hobbits, the hole-dwellers."
— Treebeard's song on the lore of creatures, The Lord of the Rings

Many fantastic settings attempting a universe will end up using "races" of people, the word race here typically referring to biologically distinct species of humanoids and not "races" of humans.

Sometimes this is used to explore aspects of the world from a different perspective, other times it's just an easy way to soapbox or describe different points of view and aspects of normal people.

In a game world, different races often have completely different abilities to give the player a larger variety of possible play-styles and character customization.

Over time certain archetypes have begun to appear; These include:

This does not include the various "evil races" that crop up, though some of those can fit into the above categories as well as their own.

If the heroes in this setting form a Five-Man Band, there will typically be one of each race represented, since each race can usually "map" to one of the five slots better than any of the others.

In the role of a Sixth Ranger, the "sixth species" may be a member of a lost or hidden race, a Last of His Kind from some ancient ruins of a once great species. This set up usually enforces Hybrid Overkill Avoidance to keep the balance.

See Square Race, Round Class for the deliberate subversion. The Fantasy Axis of Evil is the Evil Counterpart.