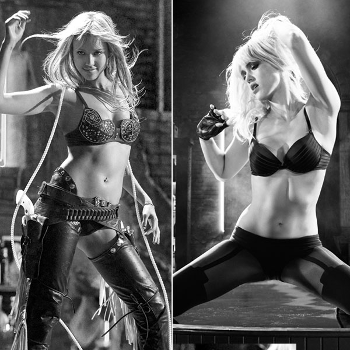 Yeah, take it off! Please? No? Okay, nevermind...
Advertisement:

An exotic dancer whose outfit is revealing enough to be sexy, but modest enough to not offend censors because the show isn't rated for nudity. The show is ostensibly family-friendly, but the characters visit a strip club for plot-related reasons. Her dance moves, while alluring, are no more risque than what you'd see in the average music video, especially compared to what real strippers will do to pay for nursing school. Any "stripping" will involve a jacket, dress, or some other outer layer of clothing, and her remaining outfit, while sparkly, is essentially lingerie with all naughty bits covered.