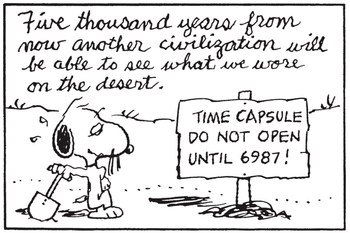 There are two big exceptions to this. One is when they just use a nice round number by itself for the year; thus, all the TV shows and movies set in the year 2000 (or 1999, or 2001). The other is sequels to something that was set in Exty Years; for example, Star Trek: The Original Series came out from 1966 to 1969 and was mostly set from 2266 to 2269note  though it should be noted that this is not the Gregorian calendar, but a new calendar. These dates are called "Stardate X", but Star Trek: The Motion Picture came out in 1979 and was set in 2272, because it needed to be only a few years after the end of the series. Likewise for Star Trek: The Next Generation and its spin-offs, which took place almost a century after the beginning of the original series (2364 in TNG's Season 1) and continued in real-time thereafter, but originally premiered in 1987. Thus, when the titular ship of Star Trek: Voyager ended its, well, voyage in 2378, its last episode aired in 2001.

It should also be noted that characters, like real people, often round numbers off. Just because someone says something happened "1000 years ago", that doesn't mean it couldn't have happened 992 or 1038 years ago.

The trope's name comes from Homestar Runner's pronounciation of an X in "futuristic" dates, such as the setting of Mega Man in 200X (later 20XX) and Metroid in 20X5. The series parodies this directly by setting their mock-anime mock-spin-off series in the year 20X6 (pronounced "Twenty Exty-Six"). That is, however, another trope.

The Human Popsicle, Sealed Evil in a Can, and Sealed Good in a Can have often been that way for Exty Years too. Similarly, it's the almost universal practice for the Class Reunion. Not to be confused with Exactly Exty Years Ago, which is when two important In-Universe points are a round number of years ago (although these two tropes often appear together).