All spoilers on this page are UNMARKED. 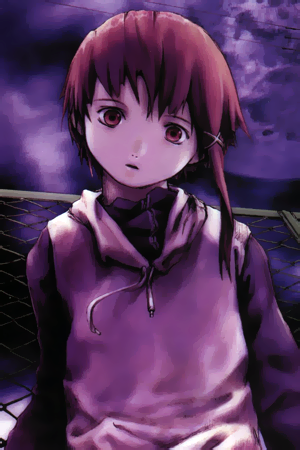 Titular character and protagonist of the series. Lain is initially portrayed as a emotionless fourteen year old girl being raised by her ineffectual mother and computer obsessed father in a cyberpunk Japan. After receiving a mysterious email from a recently deceased classmate she is thrown into a conspiracy that causes her to question the foundations of her existence. 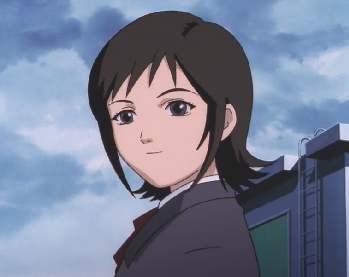 Alice is a fourteen year old who attends the same school as Lain Iwakura. During the series Alice attempts to befriend Lain in hopes of helping her come out of her shell. She soon becomes Lain's close friend.

Exclusive to the video game, Touko is a 27-year-old counselor/psychiatrist working for Tachibana General Labs. She spent some years as a transfer student in America, where she met her boyfriend, Takashi. Now returned to Japan, she's taken on Lain as her first client.

Lain's computer obsessed father who first introduces her to the world of The Wired. Compared to his wife, Miho, he is much more affectionate towards Lain and seems to legitimately care for her. It is revealed in Layer 10: Love that neither he or the rest of the Iwakura family are really her family, but regardless Yasuo still loved Lain like a daughter.

Lain and Mika's apathetic stay at home mother. Miho is completely indifferent to the lives and feelings of her daughters.

Lain's arrogant older sister. Throughout the early portion of the series she is apathetic towards Lain and her peculiar behavior.

The God of the Wired 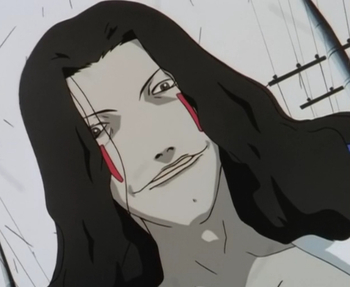 Masami Eiri was the project director at Tachibana Laboratories where he worked with the experimental Protocol 7. Eiri was fired from his position at Tachibana after it was uncovered he'd been secretly inserting foreign code into the the Wired. He was found dead the next day, allegedly by suicide. In reality, Eiri had uploaded his entire consciousnesses onto the Wired, declaring himself "God of the Wired". His goal is to accelerate human evolution into its next stage by merging the collective human unconscious with the Wired, creating a godlike being.

Knights of the Eastern Calculus

The Knights of the Eastern Calculus

The Knights are a rogue hacker group with a dubious agenda. Gradually it's revealed that they view Masami Eiri as a God and work to bring about his goal of merging the Wired with reality.

A duo of suited men with hi-tech eyepieces. They are stalking Lain for unknown reasons and seek to bring about the end of the Knights. Their employer works for Tachibana Laboratories and their allegiance to the company (be it as workers or mercenaries hired out) is ambiguous.