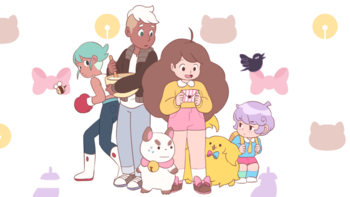 , Bee and Puppycat is a cartoon series on Frederator's Cartoon Hangover, and later Netflix.

After being fired from another job, our heroine Bee finds herself taking another long walk home. This time, her walk is different. From the heavens descends a cat (or maybe a dog?), which she adopts into her home. After unsuccessfully looking for more temp work, Bee comes home with presents for the mysterious creature, only to find she has no more food money.

With that, she and her houseguest have whisked away to the latter's temp job. The now teamed-up Bee and Puppycat take the available work, which involves saving various citizens of the universe. Can Bee stay focused enough to be effective in combat? Will Puppycat find his true self? Will the ladybug ever be loved? Only time will tell.

parts are out on Cartoon Hangover Youtube. Both were combined

to create a more flowing narrative in honor of YouTube's Geek Week 2013.

Due to the overwhelming response and support for the short, Cartoon Hangover announced a Kickstarter campaign to fund a full-length series.

The Kickstarter can be found here.

Season 1 started on November 6th, 2014. The second season was finally made available in 2016 and consists of the last four shorts, condensed into one mega-episode. The series in its entirety can be found on Cartoon Hangover's VRV channel, while only Season 1 can be found on the YouTube channel. The remaining episodes were uploaded regularly from October 5th - November 9th 2018.

was uploaded on the Cartoon Hangover Youtube channel for a sequel to the series; Bee and Puppycat: Lazy in Space. It expanded upon the world of its lead characters, with animation duties switching over from Dong Woo Animation to OLM Incorporated.The show expands its running time to half-hour episodes instead of the short 5-10 minute episodes of the original series.

Bee and Puppycat: Lazy in Space premiered on Netflix on September 6, 2022, consisting of 16 episodes, which also includes a three-episode remake of the original series in that number.

An 11-issue comic adaptation was published by KaBOOM! Comics between 2014 and 2016. The series now also has a website