Aventia is a shonen fanime created by LFZ Productions. Taking cues from Dragon Ball Z, One Piece, Avatar: The Last Airbender, amongst many more, the series revolves around a group of teenagers who were thrown into an alternate dimension somehow, and they are then given awesome powers after breaking mythical crystals. With great power at their disposal, they are on a mission to explore the world of Aventia to find a way home.

Originally intended as a reboot of the 2016 fanime Quest Of Bluefire, also created by LFZ Productions, it was spun off into it's own, independent series as the two were way too different to be the same series. Whereas Quest of Bluefire series revolved around Firesoul creatures, humanoid beings with blue, green, pink, or purple skin, while Aventia revolves around human characters who were banished off Earth and sent to another dimension. 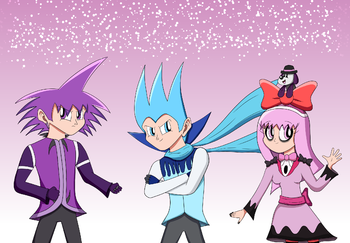 So they're humanized now....
Advertisement:

Tropes that Aventia provides an example of: