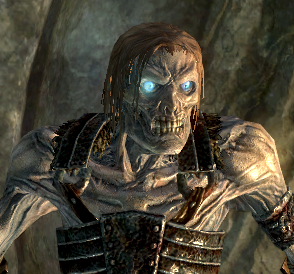 Look how happy he is to see you!
Advertisement:

The developers of Skyrim have been critically lauded for building one of the most beautiful, interactive, vast worlds ever seen in video gaming, and rightly so. On another level, however, the world of Skyrim can truly be quite nightmarish and dangerous, whether it be on the lonely northern snowfields or in a supposedly abandoned shack by the river. In its environment the game regularly generates and contrasts Nothing Is Scarier, Jump Scares, and many more tropes.