Rocks Fall, Everyone Dies
aka: Rock Falls Everybody Dies 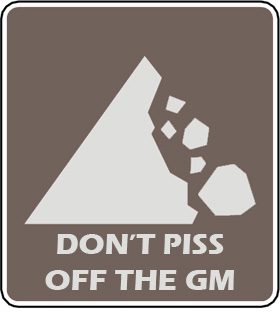 "You and your group of nerds fall into a pit and it's full of dynamite and you blow up. The end."
— Rodrick, Diary of a Wimpy Kid
Advertisement:

This is what happens in Tabletop RPGs when the Game Master gets utterly fed up with the players: he kills them all spectacularly.

Precisely what drives a GM to this extreme varies. Perhaps somebody was a Rules Lawyer once too often. Perhaps the gaming group mocked his plotting skills a bit too much. The players might have spent all their time going everywhere but where the plot wants them to. Maybe the group consisted entirely of Munchkins. Maybe they didn't like that "totally awesome" GMPC as much as the GM did and tried to kill him in his sleep. Or maybe the players are just Too Dumb to Live. Or maybe, just maybe, the GM is a sadistic bastard who's determined to see the players fail at any cost.

Regardless of the cause, if the GM goes as far as Rocks Fall Everyone Dies, the campaign has failed on a grand scale. Maybe it's time to stop the metagaming, let somebody else GM, or just find a new gaming group altogether.

A lesser form of this trope can target just one particularly annoying player, often with a bolt of lightning. Since the GM is the local god, this works even if the target character is underground, in a Faraday cage and wearing a static discharge bracelet. Merely threatening players with lightning can also be effective in controlling players. The first edition Advanced Dungeons & Dragons Dungeon Masters' Guide even suggested using "blue bolts from the heavens" and "ethereal mummies" on PCs to keep their players in line.

The webcomic Something*Positive provides the Trope Namer in this strip

. The underlying concept stretches back to the beginning of Tabletop RPGs, having been seen in the extremely deadly AD&D adventure Tomb of Horrors in 1975 (and quite likely used by individual DMs even before that). This ending is a Tabletop Games form of Shoot the Shaggy Dog, or Kill 'Em All when premeditated. A subtrope of Total Party Kill. When the players decide to detonate the game instead of the GM, it's Off the Rails. A nigh-unbeatable Beef Gate used this way is sometimes referred to as a "Grudge Monster" or "Grudge NPC."

Not to be confused with Big Rock Ending.

Referenced on 1d4chan, the wiki for 4chan's /tg/ board on this page

NOTE: This is not just a trope for everyone in a story dying. That is Kill 'Em All.

Also, do not add examples about the extinction of the dinosaurs. Although their extinction likely involved literal rocks falling from space, they are not a part of this trope. They too fall under Kill 'Em All.

As DM, JP kills the players routinely for a rush of power.

As DM, JP kills the players routinely for a rush of power.