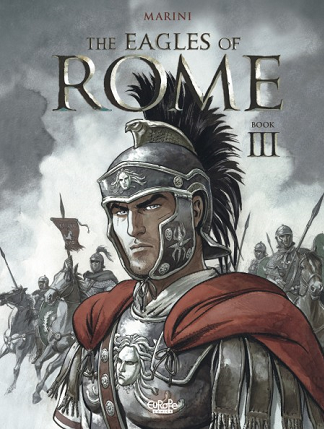 "You will be a great god of war, Ermanamer, you will rule our people and your enemies... Riding a white horse, you will emerge from our deep, black forests... And you will forever chase Romans away from our land..."
— Freja the Seer
Advertisement:

Les Aigles de Rome (The Eagles of Rome) is a French comic book series by Enrico Marini taking place in the early first century, and is mostly about the origins and happening of the Battle of the Teutoburg Forest

through the eyes of two men, one on each side of the Rhine, though they are friends.

After the Romans defeated and made the tribes of Germania swear allegiance to the former's empire, the latter must provide them with hostages to prove their goodwill in maintaining the alliance. Ermanamer, the son of the chief of the Cherusci, is brought to Rome. At the same time in Italia, Marcus Valerius Falco, the son of a veteran officer, is brought to the capital by his father, who is to meet with the Emperor. The elder Falco is charged with Ermanamer, who is renamed Arminius, in order to make him a true Roman along with his own son. Through long and arduous training, the two young men come to bond to the point of being blood-brothers. But Ermanamer has his own calling on the other side of the Rhine...