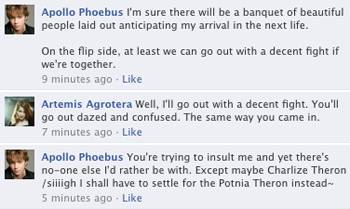 Such a shining wit.
Travis: ...Can we stop the banana talk now?
Will: At least I /have/ a banana...
Malcolm: Yeah. An old squishy one.
Percy: Do bananas make you uncomfortable, Travis? Are you allergic?
Jason: I have a banana too. But mine's better than yours.
Will: Piper must have poor taste in bananas...
Hermes: ...when you talk about bananas, you really mean dicks, right?

Facebook Shenanigans is a Percy Jackson RPG, which follows various canon Percy Jackson characters and their adventures on Facebook. You can follow some of the goings-on here

or in (theoretically) weekly round-up posts over here

. Sign-ups for the game are currently open.