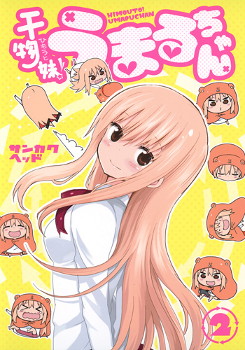 Looks can be deceiving.
Advertisement:

Umaru Doma, age 16, is the perfect girl at school and around town; beautiful but with a kind heart, athletic, always gets high test scores, and while popular remains humble and is greatly admired by students and faculty alike, but...

Umaru at home is a barely functioning otaku slacker who lives with her white-collar worker brother, Taihei, who more or less caters to her every whim due to being easily nagged into things. Can Taihei fix his broken sister, who would rather eat junk food and play video games all night than go outside and play, or will his weak will allow her to become a complete shut-in?

Himouto! Umaru-chan (干物妹!うまるちゃん) is a 2013-2017 manga series written and illustrated by Sankaku Head and published in Weekly Young Jump, with an anime adaptation directed by Masahiko Ohta for Dogakobo (Monthly Girls' Nozaki-kun and Plastic Memories) as part of the Summer 2015 Anime lineup, an OVA in October 2015, and another in April 2017. A second season (Himouto! Umaru-chan R) premiered on October 9, 2017.

Has a couple of spin-offs by the same mangaka — Himouto! Umaru-chan S, set in an Alternate Universe, and Akita Imokko! Ebina-chan, a side-story following Umaru's friend Ebina from when she first arrives in Tokyo. The manga itself received a sequel in Weekly Young Jump again, titled Himouto! Umaru-chan G.