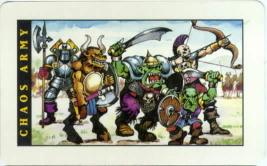 Any fan of fantasy, Heroic, High or Low (or otherwise) knows the usual Tolkien mould of heroic races — elves, dwarves, halflings, gnomes, and whatever else. (Oh, and humans too.) But of course the Always Chaotic Evil races often come in certain varieties themselves, in something of an Evil Counterpart trope of the Five Races.

Unlike the usual Five Races they are not always allied, and are as prone to getting in fights with each other as they are with the 'heroic' groups. It's common for Evil Overlords to unite them yet other times they'll work together without a real leader. There will almost always be at least one good member of at least one race, and sometimes the story will make efforts to either show that they're not necessarily inherently evil, or find a way to justify it through magic, circumstances or whatever else.