Comic Book / Whatever Happened to the Man of Tomorrow?

Given that this is a self-contained Imaginary Story that does not have a canonical impact on any Superman series, all spoilers on this page are unmarked. Tread carefully. 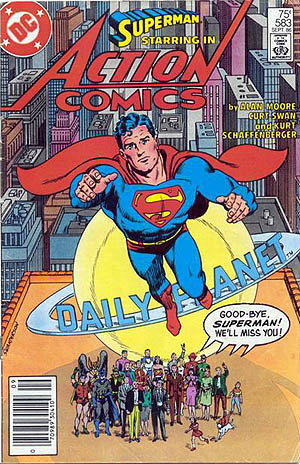 See ya, big guy. You'll be missed.
"This is an Imaginary Story... Aren't they all?"
Advertisement:

Superman really hit his stride in The Silver Age of Comic Books, which introduced things like multi-colored Kryptonite, Supergirl, Bizarro, and the Fortress of Solitude. Even today, much of what the average person knows about Supes (not counting his death) comes from that period.

Then came the Crisis on Infinite Earths, a mega-event that reset the continuity of every DC title. Thus began the modern, John Byrne era of Superman which strove to be more "realistic". Realizing that Silver Age Superman deserved a grand finale, editor Julius Schwartz hired Alan Moore, and Superman ur-artist Curt Swan. The first issue was inked by none other than George Pérez and the second issue was inked by Kurt Schaffenberger (who was also best known for defining the look of Lois Lane, and his work on Shazam! and the Captain Marvel Family tales), and made the last Silver Age tale — an "imaginary story." Published in September, 1986. For Moore, a lifelong Superman fan, specifically the Silver Age Superman, this story was the "final" Superman story. For many writers, it's one of the greatest Superman stories ever written, with Neil Gaiman claiming that the opening is the greatest triple entendre in comics and a goodbye to a Superman that existed in Moore's heart.

Daily Planet reporter Tim Crane comes to interview Lois Elliot (née Lane) on the anniversary of the death of Superman. Lois tells the story in a Whole Episode Flashback.

After Superman's life has settled into an easy groove as all the villains lie low, he spends his time helping NASA with experiments. Of course, the villains then go berserk, attacking Metropolis in increasingly grisly ways. Superman takes his friends to the Fortress of Solitude, pursued by the Kryptonite Man, the Legion of Supervillains, and creepiest of all, an enslaved Lex Luthor, mind-raped and taken over by the remains of Brainiac.

Superman makes his last stand, and survives by the skin of his teeth. He defeats Brainiac, but realizes there's one last villain: Mxyzptlk. Bored after spending 2,000 years as a mischievous imp, Mxyzptlk has decided to try being truly evil. Superman is no match for Mxyzptlk's godlike power, but thanks to a warning from the Legion of Super-Heroes, he's able to kill Mxyzptlk using the Phantom Zone projector. Appalled that he's violated his code against killing, Superman exposes himself to gold kryptonite (permanently robbing himself of all powers) and apparently commits suicide by exposure to the elements.

Back at the Framing Device, Tim Crane thanks Lois for her story, leaves, passing Lois's husband Jordan Elliot. It's revealed that Jordan Elliot is actually Superman and that he's in his retirement, happy to enjoy an ordinary life for once. Jordan, crazy in love with Lois, winks at the audience, enjoys a Happy Ending... and misses the fact that his infant son is exhibiting Super Strength.

That's the tale. As time went on, the fans rejected the modern era Superman, and the classic Silver Age trappings came back. However, the legacy of this story would continue to endure.

Just as this story was Silver Age Superman's "epilogue" following Crisis on Infinite Earths, a similar story has come in the wake of Final Crisis, Batman's Whatever Happened to the Caped Crusader? The two stories are similar in presence, but while "Tomorrow" was a tribute to the Silver Age Superman (whose tenure is typically dated to last all the way through The Bronze Age of Comic Books and ended with Crisis on Infinite Earths; the Golden Age Superman, Kal-L would later return in Infinite Crisis), "Caped Crusader", which followed in the death of Bruce Wayne in Final Crisis, is a tribute/epilogue to all versions of the Bruce Wayne Batman, as told by the various versions of his allies and enemies. Both storylines, however, maintain a theme of renewal: "Tomorrow" sees the future of Superman passed onto the next generation, and "Caped Crusader" sees Batman reborn to continue his crusade against injustice.

Whatever Happened to the Man of Tomorrow? provides examples of: