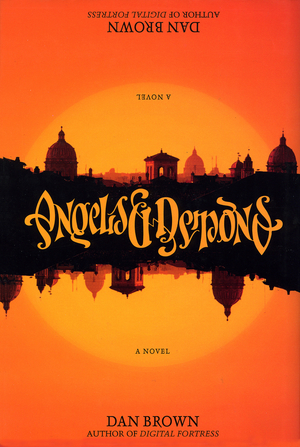 In his first adventure by Dan Brown, symbologist Robert Langdon gets called late at night by the head of CERN over an urgent matter - and is faxed the picture of a mangled corpse, what used to be the facility's most prominent scientist, branded with the word "Illuminati" on his chest.

Being an expert on Illuminati signage, this lights a fire under his ass. The Head of CERN, Maximilian Kohler, arranges for a plane to pick him up to investigate. Once at the CERN facility and joined by the late scientist's daughter, they find that a quarter gram (it's a lot, trust us) of Antimatter has been stolen, using the dead man's biometrics.

Meanwhile, the pope has died, and the cardinals of the Catholic Church are in Vatican City to elect a new pope. The Swiss Guard is alerted to the appearance of the stolen antimatter, which has been hidden somewhere in the Vatican with a security camera pointed at it so the protagonists can see its timer counting down. When the canister's battery runs out at midnight, the antimatter will come into contact with the physical matter of the container, causing an explosion comparable to that of a nuclear weapon.

Cue a mad rush to find the antimatter canister before it annihilates Vatican City, searching the city's monuments for historical clues and attempting to save four kidnapped cardinals along the way.