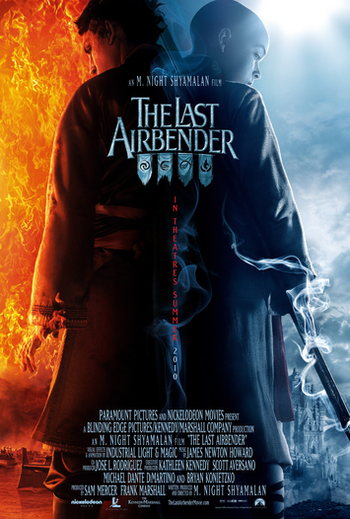 You want the fella on the right.
Advertisement:

The Last Airbender is a 2010 Live-Action Adaptation by M. Night Shyamalan based on Avatar: The Last Airbender, the word "Avatar" being omitted to prevent the title from bumping into the film Avatar. It was planned to be the first film in a trilogy matching the three seasons of the show but plans were canceled after it barely broke even at the box office.

The world of The Last Airbender consists of four nations: the Earth Kingdom, the Water Tribe, the Fire Nation, and the Air Nomads. Each society has people capable of manipulating—or "bending"—the element that is their namesake. Only one person in each generation, the Avatar, is capable of bending all of the elements; their duty is to be a mediator and peacekeeper of the world.

The film's hero is Avatar Aang, an Air Nomad boy who froze himself in an iceberg to avoid his destiny. One hundred years later, he reawakens to find that his people have been massacred by the Fire Nation, which is trying to take over the world. Seeking to take his calling seriously and challenge the Fire Lord, he journeys with his new friends, Water Tribe teenagers Katara and Sokka, to the North Pole to find a Waterbending master to learn the art. But news that the Avatar has returned spreads quickly, and he is hunted by both Prince Zuko, the disgraced son of the Fire Lord, and Admiral Zhao, the Fire Lord's second in command.

The Last Airbender provides examples of the following tropes: