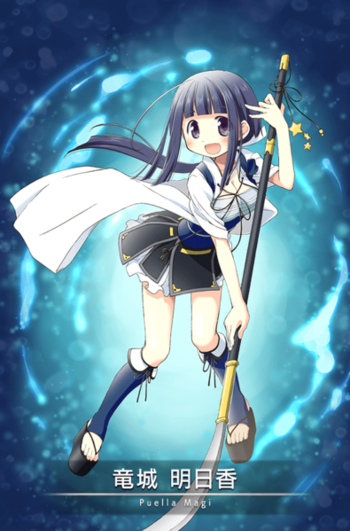 An assistant Naginata instructor at the Ryushinkan Dojo and Magical Girl. As the only child of the Dojo Master, she trains hard everyday. She is disciplined, but also absentminded, and that absentmindedness can get her into trouble.

One of the initial playable characters. Her beloved cousin wanted to be a police officer but because his father, who ran for the Kamihama mayoral election, was caught in an electoral fraud, he could have been disqualified from the police school. Her wish was that her cousin could be a police officer. She makes a magical girl duo with Sasara Minagi.

Her innate magic is 'law enforcement', meaning that she can force her target to be obedient. 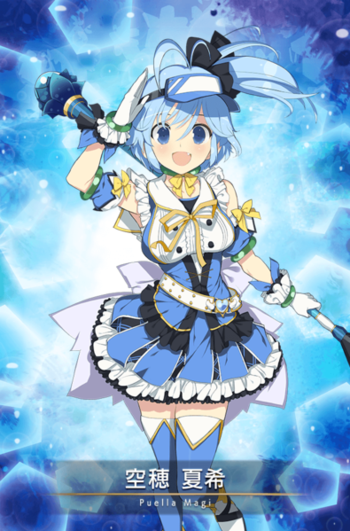 An enthusiastic supporter of everyone around her, there isn't a Magical Girl livelier than Natsuki. She is a huge fan of baseball, and as a cheerleader and the baseball team's manager, she's there for the team year round.

One of the initial playable characters. A girl who loves baseball, but can't pursue it because her middle school doesn't allow girls into the baseball club, so she became a cheerleader and found that she loves cheering on her friends more than she loves baseball. Her brother is an ace in his baseball team, but before the Little League tournament, he suddenly collapsed from fever. Unable to find a replacement and risking disqualification, Natsuki wished for her brother's recovery before the game.

Her innate magic is a form of encouragement, increasing the target's abilities. 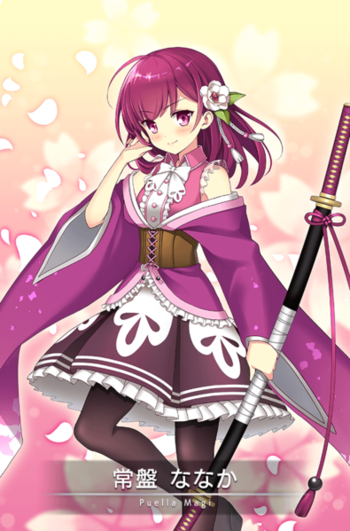 A Magical Girl from the head family of Kashin-ryu, a school of flower arranging started in the Edo period. Beautiful and impeccable, she appears to be innocent, but she is actually a wise strategist, able to read any situation she is put into with ease.

One of the initial playable characters, she appears as a secondary character in "And So The Azalea Blooms" event. The heir of her family's flower arranging school, but was wrestled away from her birthright by her father's students. Seeing the school was corrupted out of its tradition, Nanaka's father begged her on his deathbed to take back the school. Her wish is to gain power so she can enact revenge with her own hands, which gives her the ability to sense her enemies' hostile intention. The leader of a team consisting of herself, Akira Shinobu, Meiyui Chun, and Kako Natsume.

Her innate magic is to 'see who her enemies are'. 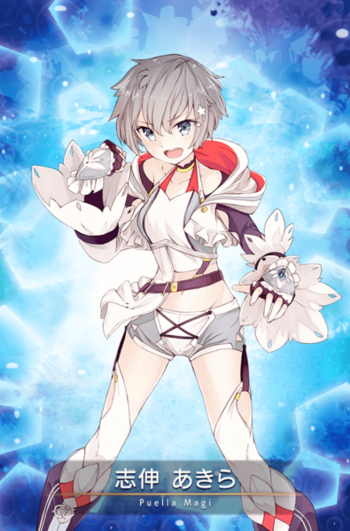 A Magical Girl who looks, talks, and acts like a boy. She was raised and trained alongside the boys at her father's karate dojo. Akira is known as "The Troubleshooter of Sankyoin," because she can't say no to someone in need.

One of the initial playable characters, appears as a minor character in "And So The Azalea Blooms" event. A tomboyish martial artist who feels compelled to help the helpless because of her father's advice. She walked in a Witch's barrier when investigating a missing underclassman, and contracted with Kyubey to gain power to save the trapped people in the barrier. One of the people roped in by Emiri for her "Trouble Consultation Office" because of her reputation for fixing people's problems. She also serves as one of Nanaka Tokiwa's subordinates.

Her innate magic is to identify weak points. 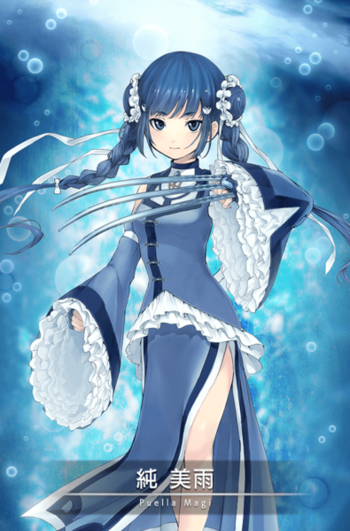 A kung fu master, Meiyui beongs to the Blue Seas Family. She left her parents in China and came to Japan alone. She is well-composed, but she lets that all go when it's time to protect her family and townspeople. She is an excellent Mahjong player.

One of the initial playable characters, appears as a minor character in "And So The Azalea Blooms" event. The third generation descendant of a China-born Japanese who stayed in China after the World War II, the family established a black market organization that is closely tied to the neighborhood. Meiyui's father was caught by the police on the suspicion of a crime that he had no connection to, and the organization was in danger of dissolving. Meiyui's wish was to protect the Blue Seas Family by exposing the corruption in the law enforcement that frames her father. She serves as one of Nanaka Tokiwa's subordinates.

Her innate magic is 'let them see lies as truth' as clear as it can get. 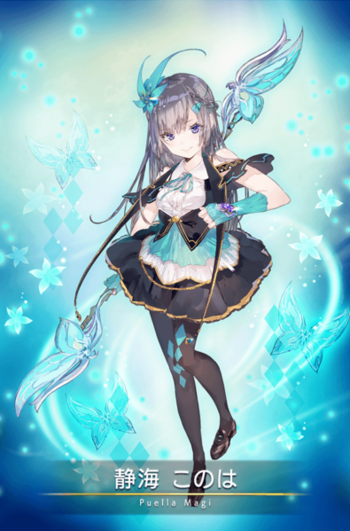 A Magical Girl raised in an orphanage. She came from an affluent family, but after her parents fell ill and died, she went to live in the Azalea House. A pro at everything she sets her mind to (except cooking...), she helps keep the other orphans in line.

Debuted on October 10, 2017 along with Hazuki and Ayame as one of the main characters in the "And So, The Azaleas Bloom" event. She came to the Azalea House after her family's fortunes turned and her parents died of stress, and after leaving the Azalea House she helps raise Ayame together with Hazuki. When the three of them learned that their beloved orphanage would be torn down, they made their wishes together to save it. Konoha's wish was to eliminate all threats to the Azalea House. Distrustful and hostile toward strangers, she acts as the main hurdle for Hazuki and Ayame's attempts to work with local magical girls solving the fainting incident.

Her innate magic is illusion and fog creation. 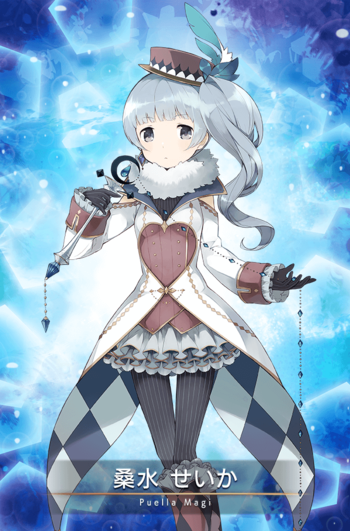 Seika is an introverted Magical Girl who has social anxiety. She lives in the same apartment complex as Leila and Mito, and keeps her distance from anyone but them. People think her to be cold and uninterested, but she secretly has a deep passion for teen dramas.

Debuted on March 12th, 2018 as one of the main characters in the "See You Tomorrow" event. An introverted girl who lives in the Daito Apartment Complex along with her best friends Leila and Mito. After becoming a Magical Girl, she investigates the family who went missing in her apartment complex while desperately trying to keep her friends from finding out about Magical Girls, even at the cost of their friendship. Her wish was to revive Leila after she committed suicide under the influence of a Witch's Kiss. Her personal magic allows her to teleport between any two bodies of water. 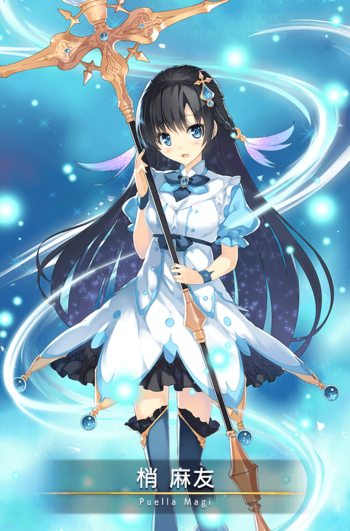 An alluring magical girl who draws in the attraction of men without realizing it. Her desire for a father figure, which gives her a habit of letting down her guard to older males, is most likely the reason. The influence of her late father led her to a love of art. She works part-time at an art gallery, with a goal of a job of art reparation.

She made her playable debut on March 23th, 2018 as one of the main characters in the "Wait, You've Got It Wrong!" event. A girl as beautiful as she is innocent, her love for her late father has led her to search for someone to fill the hole in her heart, but this is often misinterpreted as sexual advances by the men she interacts with. Her wish was for her boss' family to stop breaking apart.

Her innate magic stuns enemies, making them unable to attack for some time. 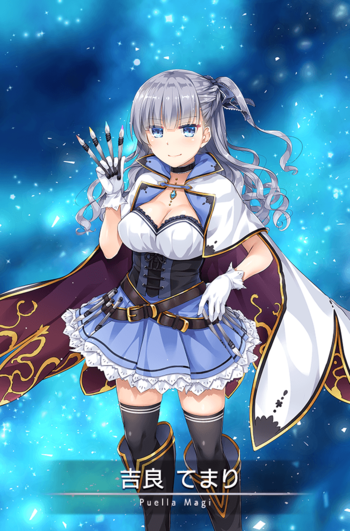 An eccentric Magical Girl. She's usually absent-minded and it's said that the people around her don't know what she's thinking. However, she excels in literary skills and sometimes expresses her feelings by taking up a brush. She belongs to the History Research Club alongside her childhood friend and constant companion Mikura Komachi.

First introduced on November 29, 2019 as a main character of the "Rondo of Oblivion Sleeps for Eternity" event. A member of the History Research Club along with her friends Mikura and Seira, the three of them create a movie in order to keep their club alive. She works as the scriptwriter, using the tragic tale of lovers from the opposing wards in Kamihama as her plotline. An old literature fan, she's an eccentric girl who look up to writers forgotten by history. Her wish is so the words she weave to reach somebody's heart.

Her innate magic is to cause people's behavior to follow any script that she writes.