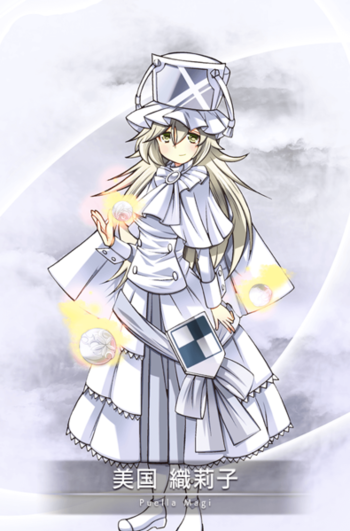 A blue-blooded Magical Girl whose father is an ex-parliament member. Oriko does whatever it takes to get the job done, but her strong sense of justice, inherited from her father, keeps her from overdoing it. She is refined and loves drinking tea at home.

One of the initial playable characters. She had a vision of Madoka turning into Kriemhild Gretchen and planned to kill Madoka to avert this future disaster. However, after seeing a vision of Mami and Kyouko entering Kamihama City, she could no longer see the vision of this disaster anymore. Concluding that Kamihama City has something to do with the change of vision, she decides to make that vision comes true. Her wish was to know the reason why she was born, and her personal magic gives her periodic visions of the future. 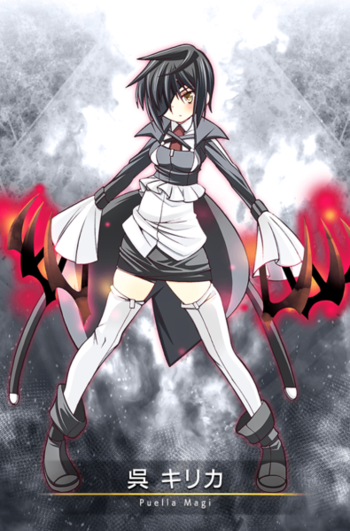 Oriko's loyal servant, Kirika is a dangerous Magical Girl who doesn't hesitate when acting for her queen, no matter how immoral the deed. She is known as the "Dark Magical Girl" but her mind is pure like a child's. She even has a sweet tooth like one.

One of the initial playable characters. A childish Magical Girl who serves Oriko with fanatical loyalty, she'll stain her hands with blood without hesitation for Oriko's sake. She was on her way to enacting the "Magical Girl Massacre" on Oriko's orders before she was recalled due to Oriko's vision of Kamihama. Her wish was to change into someone who could serve Oriko, and her personal magic allows her to slow down her enemies' perception of her. 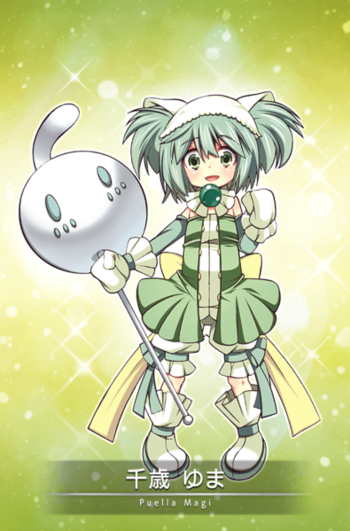 A young Magical Girl who is very attached to Kyouko, Yuma sees her as her sister, and is willing to do anything for her. Although she is an innocent child, she was abused badly, and experiences terror much more distinctly than others, due to that trauma.

One of the initial playable characters. A child whose abusive parents were killed by a Witch, she was taken in by Kyouko, who's teaching her the street life. Goaded by Oriko to make her contract, she's stranded in Kamihama City to lure Kyouko into searching for her. Her wish was to heal Kyouko's injuries. 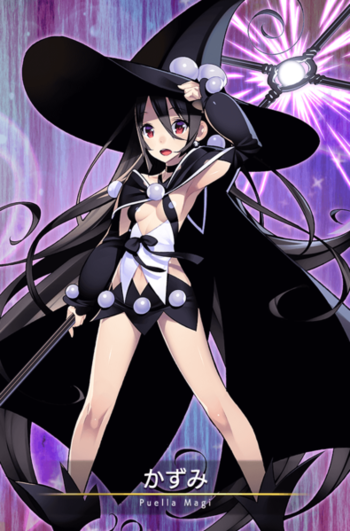 A Magical Girl from Asunaro City who lost her memory. She lives with her teammates, Umika Misaki and Kaoru Maki. Food is a huge motivation for her. Not only does she like to eat, she's a skilled cook too. Her hair points to where Witches are.

Debuted on November 20th, 2017 as one of the main characters of the "Another Daze" event. An eccentric, mysterious Magical Girl who is missing memories of her past. Her wish was to cure her grandmother's dementia for the short time before she passed away. 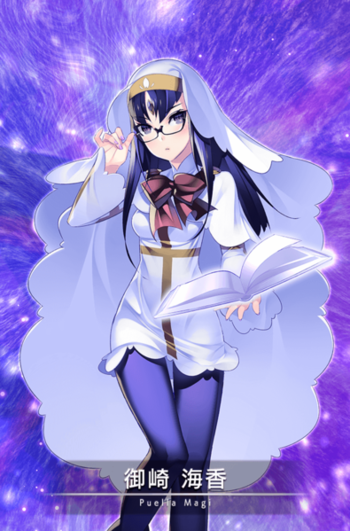 A Magical Girl from Asunaro City who also works as a popular author, despite still being a student. She lives in a house with Kazumi and Kaoru Maki. The way she cures her writer's block is by cooking and shopping. She keeps all her manuscripts on her computer.

Debuted on November 20th, 2017 as one of the main characters in the "Another Daze" event and the event reward. A famous author who moonlights as a Magical Girl, though she keeps her identity a secret. Her wish was for an editor who would give her writing a chance. 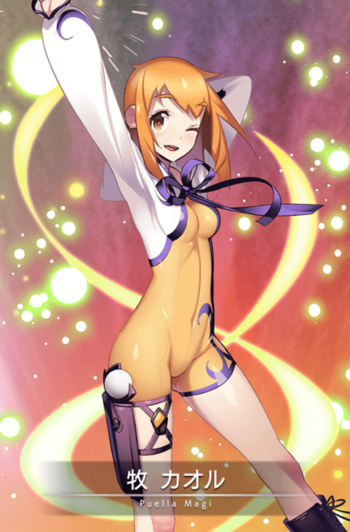 A Magical Girl from Asunaro City. She's a soccer player who is so good that people often say she will be the best player on the national team. She is great at using her athleticism to her advantage in battle. She wears a long-sleeved uniform even in summer.

Debuted on November 20th, 2017 as one of the main characters of the "Another Daze" event. A talented soccer player whose dreams of playing professionally were threatened when she was injured during a match. Her wish was to help the other people who were hurt in that one soccer match. 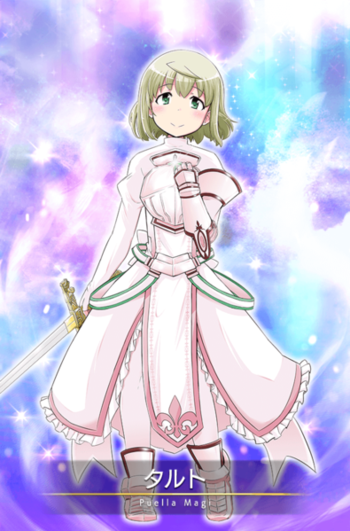 A Magical Girl from medieval France known today as Jeanne d'Arc. Upon the death of her dear sister, Catherine, she resolved to save France from the brink of ruin. Simple, innocent, and trusting of others, she fondly refers to Qube (Kyubey) as "Monsieur Angel".

Debuted on February 15, 2018 as one of the main characters of The Maiden of Hope. A pure-hearted Magical Girl with incredible potential who is destined to save France. She fights on the forefront of the French army both as a combatant against the forces of darkness and as the symbol of hope for the French people. Her wish was for the power to bring light to France. 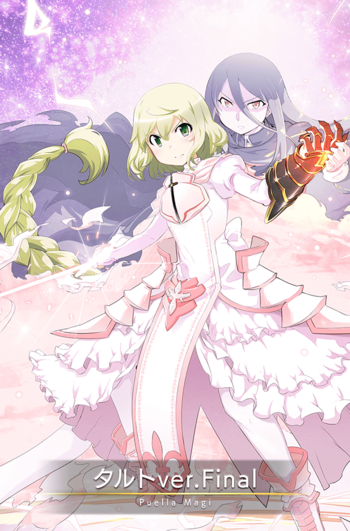 A form of Tart (Jeanne d'Arc) who has awakened as a true hero by turning people's hopes into power. In addition to the power of light, the jet-black gauntlet also possesses the power of shadow. A "perfect irregular" beyond the limits of a Magical Girl, born of a miracle granted to a single, fleeting wish.

Made her playable debut on June 19, 2020 for The End of the Legend, the Limits of Night. A version of Tart who has exceeded her limits, taking on the hopes of a certain shadow-using hero. The first Magical Girl with the "Exceed" typing. 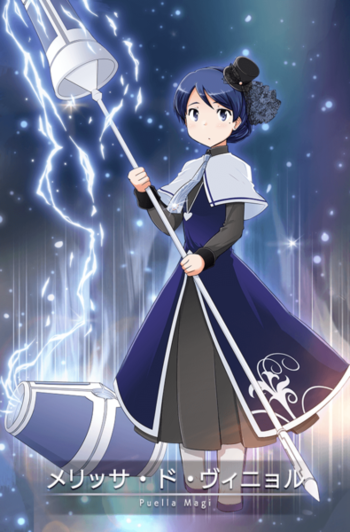 A Magical Girl of medieval France who serves in the war and attends to all of Tart's needs. She is the daughter of Captain "La Hire", who is a comrade-in-arms of Jeanne d'Arc. Though normally a kind and well-mannered girl, her fury cannot be stopped when she becomes angered.

Made her debut on February 15, 2018 as a main character and event reward of The Maiden of Hope. Tart's loyal attendant and daughter of a Captain of the French army. She is gentle, but has inherited her father's famously unstoppable fury. Her wish was to heal the injuries that Tart and her father sustained after a battle. 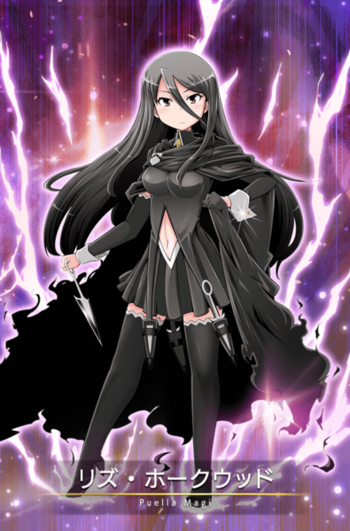 A cool-headed Magical Girl from medieval Italy who uses shadow magic. In the midst of the Hundred Years' War, she fights alongside Darc and the French army to save France. Though she would never speak of it, she is said to be descended from a famous soldier.

Made her debut on February 21, 2018 as a main character in The Maiden of Hope. A Magical Girl who wandered Europe searching for a hero before finally finding one in a peasant girl in France. Her wish was to be the one from whom a new hero will spring. 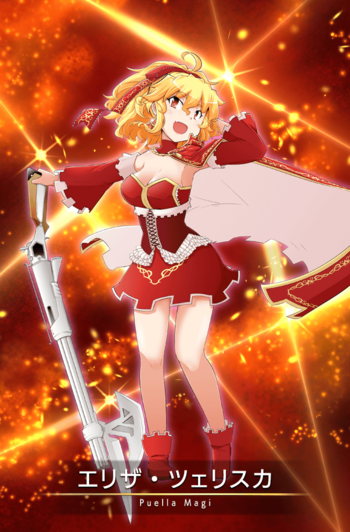 A medieval magical girl who belongs to the prestigious Order of the Dragon. She joined Tart's group in order to assist in the coronation of the King of France. She is the daughter of the Queen of the Holy Roman Emperor, and although she's a high-spirited person, she responds with a strong friendship to her recognized partners. She dislikes Qube (Kyubey) the same way she dislikes snakes.
Corbeau 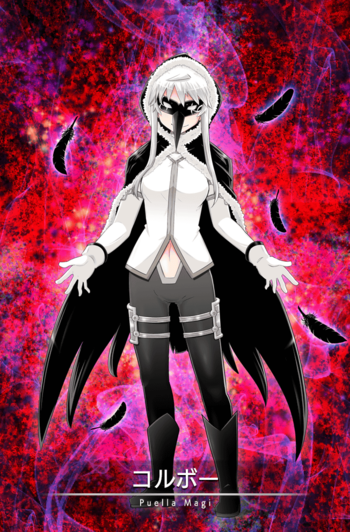 In the midst of the Hundred Year War, a masked magical girl who secretly operates in the England faction. The second daughter of three sisters, on one side her rough behavior stands out, while on the other she's kind to her family. She likes fighting for the unusual excitement she gets from fighting with a strong enemy. Her mother is a certain noblewoman, and she's generous in her outpouring of love for her older sister and younger sister.

Made her debut in the event The Maiden of Hope and released as playable with the Rebel of a Dawnless Land event. 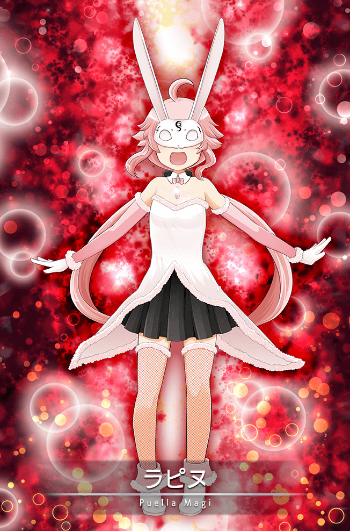 In the midst of the Hundred Year War, a masked Magical Girl who secretly operates for the English faction. She’s the eldest of three sisters, but her speech and actions are childish. Her nature is more sadistic than her sister Corbeau’s, and she enjoys “breaking” people for fun. Her mother is a certain noblewoman, and she loves her mother and sisters.

Debuting as an antagonist in the "Rebel of a Dawnless Land" event, she made her playable debut on June 19, 2020 for the End of the Legend ~The Light Fades~ event. A childish Magical Girl who serves Queen Isabelle along with her sisters Corbeau and Minou. Her wish was to return her "mother" Isabelle back to the way she was before she became a Witch, and in turn received the ability to turn back into a human after becoming a Witch herself. 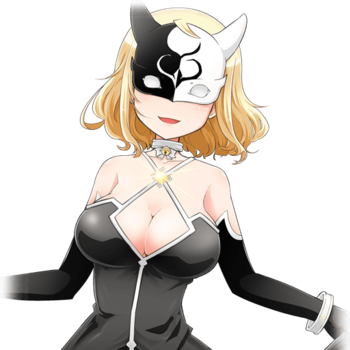 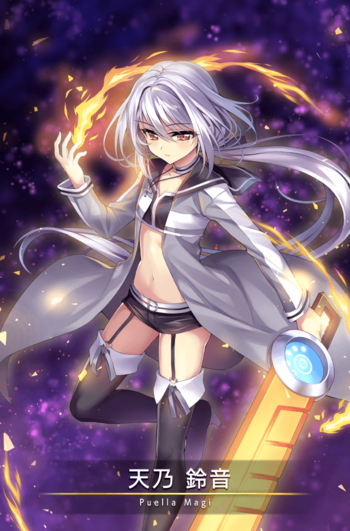 A Magical Girl who recently transferred to Akanegazaki. She has no parents and works part time to make a living. Although amiable and pleasant at school, she bears the cold face of an assassin once classes are over. Her target: Magical Girls. A tragic past lies concealed in her closed off heart.

Debuted on May 1, 2018 as the antagonist of the Cross Connection event. A Magical Girl who wanders aimlessly from city to city, with the goal of killing any Magical Girl she finds in order to stop them from becoming Witches. Her wish was to become a Magical Girl like her mentor and mother figure, Tsubaki. Her personal magic is to steal the power of a Witch that she defeats; she is currently using the flame manipulation magic that she received from defeating Tsubaki's Witch. 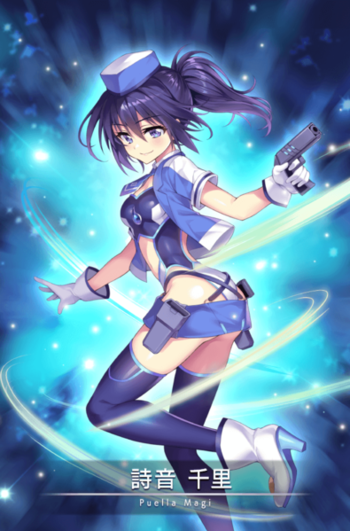 One in a team of 4 Magical Girls who attend school at Akanegasaki. Levelheaded and calm, she values being ethical above all else. While she may come off as cold, she has a caring side for her friends, having reformed Arisa's former bad behavior. Her father used to write and draw picture books.

Debuted on May 1, 2018 as a main character in the Cross Connection event. A justice-minded Magical Girl who is part of a Magical Girl team back in Akanegasaki. Her wish was to change her abusive father into a good person. Her personal magic is to cancel magical effects. 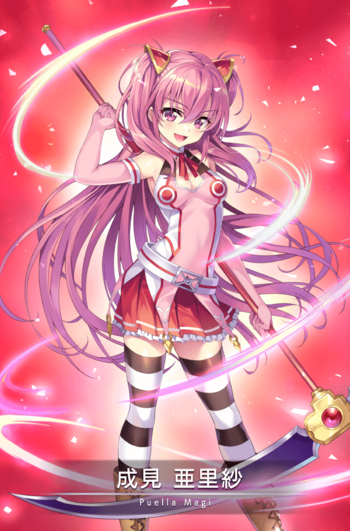 One in a team of 4 Magical Girls who attend school at Akanegasaki. Rambunctious, she hates to study, and her rough, sloppy manner is always criticized by her friend Chisato. She was a completely different person, extremely timid and shy, before becoming a Magical Girl.

Debuted on May 1, 2018 as a main character in Cross Connection and its event reward. One part of a four-member Magical Girl team back in Akanegasaki. Formerly bullied for being meek and timid, the power of being a Magical Girl changed her personality completely. Her wish was to become strong enough to stand up to everyone. Her personal magic is to boost her physical abilities. 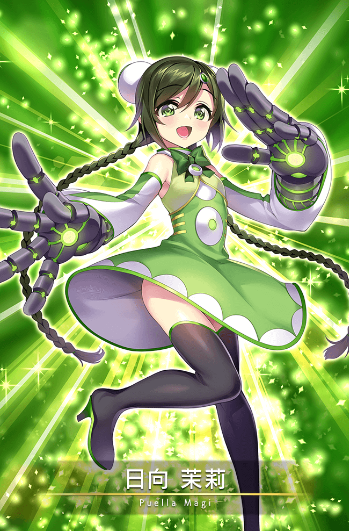 One in a team of 4 Magical Girls who attend school at Akanegasaki. Pure and friendly, between the four she's the one that sets the mood. She believes that it's more fun to have a lot of friends, and tries to get along with everyone. When she was young, she couldn't see with her eyes so she couldn't go out much, and now she has a longing for the outside world.

Matsuri made her playable debut on October 31, 2019 as the main character of the "Rumors in Disguise" event. A kindhearted, innocent girl, Matsuri never takes the world in front of her for granted. Her wish was to cure her blindness, and she possesses light magic that allows her to search for and identify people. 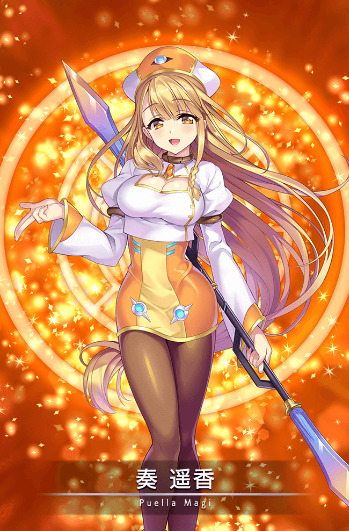 One in a team of 4 Magical Girls who attend school at Akanegasaki. As both a Magical Girl and a student, she's the go-to Magical Girl who performs good deeds tirelessly. At school she's achieved excellent grades in both study and sports, and she even serves as a student council officer. She's a naturally perfect leader, commanding everyone in her Magical Girl team.

Haruka made her playable debut on October 31, 2019 as a major character of the "Rumors in Disguise" event. Haruka is a kind, reliable senpai who leads her Magical Girl team, but she hides a dark secret. Her wish was to erase her older sister from existence, and her magic allows her to draw an enemy's attention to herself.