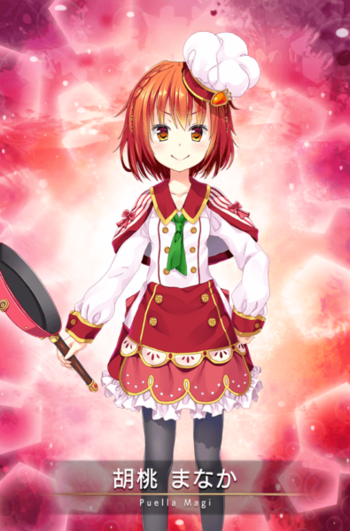 A Magical Girl who is a great chef just like her father. Manaka's family run a cozy, old-school restaurant. Her cooking is second to none, and her irritating overconfidence is her only flaw. That said, she is just proud of her hard work and has no ill intentions.

One of the initial playable characters. Manaka looks up to her father and wants to promote his restaurant, Walnuts. She initially thought that prestigious, high-class food was the path to her goal, but meeting a girl who was overjoyed with a simple soup made her regain sight of her goals, and now she runs a cooking class. Her wish was the opportunity to spread her restaurant's flavors.

Her innate magic is an advertising ability that spreads the damage of an attack around a certain area instead of it being concentrated at one point. 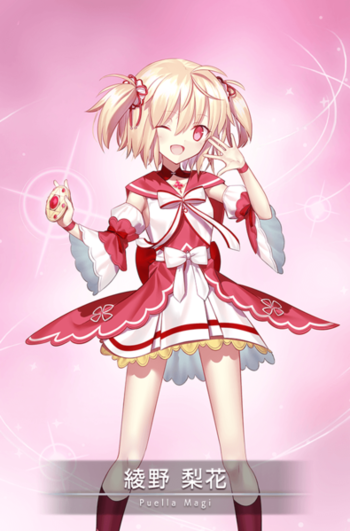 A Magical Girl who is into the latest fashion and make-up. Rika appears to be a typical girly girl, but she is actually very seriously in love. She has been secretly admiring the same person for years. A genuine person, she gets along with everyone.

One of the initial playable characters, she appears as a major character in the My Diary With You event, and a free copy of her was available during its rerun. Rika wished for her female childhood friend to forget about her boyfriend and to fall in love with Rika instead. Realizing that her wish was tantamount to brainwashing, Rika atoned for her selfishness by breaking up with her friend and getting her back together with her old boyfriend. Rika later stops another magical girl, Ren, from committing suicide and helps her to find a reason to live, after which they begin working together.

Her innate magic is to change what her target is interested in. 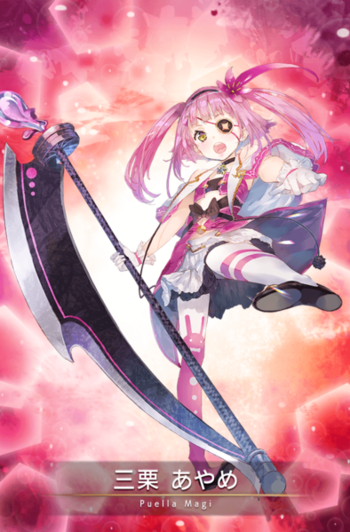 A Magical Girl raised in an orphanage. She was sent to the Azalea House after her parents abandoned her when she was barely a year old. She's simple and direct, and her wild spirit often gets her caught up in all kinds of trouble.

Debuted in October 10th, 2017 along with Konoha and Hazuki as one of the main characters in the And So, The Azaleas Bloom event. Abandoned as a baby, Ayame has lived at the Azalea House for as long as she can remember and considers Konoha and Hazuki to be her surrogate parents. When the three of them learned that their beloved orphanage would be torn down, they made their wishes together to save it. Ayame's wish was for the Azalea House to continue existing indefinitely. Her friendship with Kako and Felicia bridges the three-way conflict of Kamihama's mysterious fainting incidents.

Her innate magic is to keep something safe. 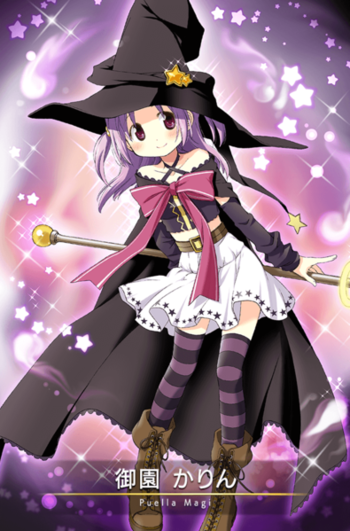 The "Magical Girl born of Halloween". Or that's what she says at least... Karin loves reading and drawing manga so much that she's even created her own Magical Girl persona. She's heavily influenced by her favorite manga, "Phantom Thief Magical Kirin".

Debuted on October 30th, 2017 as the main character of the Magical Halloween Theater event. An imaginative girl who is also Alina's junior in the art club, as a Magical Girl she's a self-styled phantom thief and Robin Hood wannabe who steals Grief Seeds from the strong magical girls and gives it to the weak. Karin's grandmother was a chronic kleptomaniac, a habit that Karin's mother despised her in-law for, so Karin made her wish to cure her grandmother of her impulse. Her and her Doppel McDougal's ability is to steal anything and instantly transport it to their hands as long as the heist target is a physical object.

Her innate magic is the aforementioned stealing. 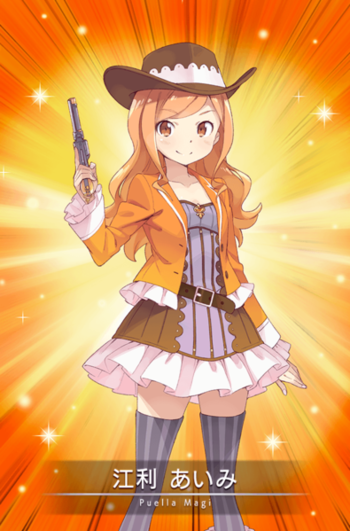 A Magical Girl who lives for love and romance. Even though she's had the same crush for so long, she still gets too embarrassed to talk when she sees him. Her greatest secret? A notebook of fantasies where she tells him her feelings and date night plans.

Debuted on October 23rd, 2017. A lovestruck girl who's been nursing a crush on a boy in her class, she's prone to fantasies of imagined romantic exploits. During one such fantasy she met Kyubey and, thinking his offer of a wish was part of her daydream, wished to know her crush's feelings toward her. Despite learning that he feels the same way, she still can't manage to confess.

Her innate magic is behavior prediction. 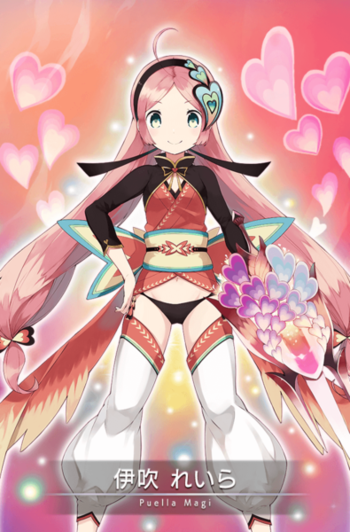 that can be transformed into a flaming sword
Magia: Circle of Fire
Illustrated by: Hanokage

A Magical Girl who lives in an apartment complex in Daito Ward, Leila is cheerful, considerate, and treats everyone with kindness, so people are naturally drawn to her. But her desire to get along with others can sometimes lead to her being taken advantage of.

Debuted on March 12th, 2018 as one of the main characters of the See You Tomorrow event. A kindhearted girl who lives in the Daito Apartment Complex along with her best friends Seika and Mito. She prioritizes making other people happy, even at the cost of her own happiness. When Seika begins acting strange, Leila finds herself drawn into the world of Magical Girls. Her wish was to make things between her and Seika how they used to be in the past.

Her innate magic is a purifying flame that can heal allies. 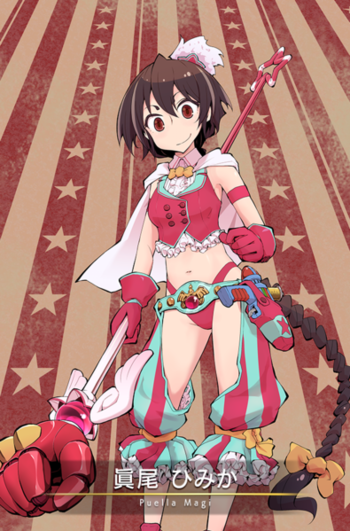 A strong-willed merchant and magical girl. The first-born daughter in a family of eight, since the passing of their mother, she supports the family alongside her father. She feels that living with family gives an irreplaceable happiness. Her family's finances are always in a dire strait, therefore whenever there's a chance she'll try anything to earn even small change. Her wish was to cure her father's illness, though the exact wording is unknown.

She made her playable debut on April 2nd, 2018 in the FM Kamihama Holy Radio Station event.

Her innate magic is to draw attention to something, which she uses her gun that shoots 1-yen coins for. 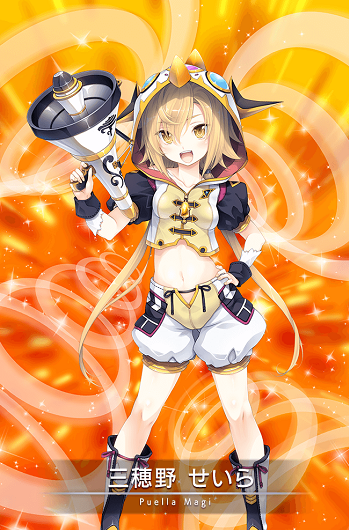 A Magical Girl who desires to be a film director. In order to make her own movie someday, she's constantly searching for material, which can end up causing trouble. She's willing to do what it takes no matter how many times and can be unreasonable, often involving her surroundings with her enthusiasm and actions, until eventually she makes the improbable come true.

Introduced on November 29, 2019 as one of the main characters of the Rondo of Oblivion Sleeps for Eternity event. A member of the History Research Club along with her friends Mikura and Temari, the three of them decide to make a movie in order to save their club, but the mixing of their innate magical abilities causes ancient hatreds to resurface in Kamihama. A lover of cinema, Seira is in charge of the camerawork and plays the heroine of the movie. Her wish was to never have to worry about funding for her films.

Her innate magic is to cause the actors in any movies that she directs to become the characters they portray. 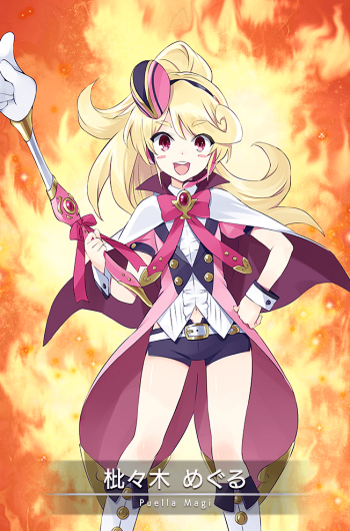 A Magical Girl who carries out live coverage of anything happening in front of her. This extends not only to school events, but the battle of Magical Girls as well, appearing anywhere. She's usually in charge of popular programs as a member of the broadcasting department, but in the classroom she's called "Your Say" because everything is reported live.

Introduced on March 3, 2020. A Magical Girl who enjoys broadcasting and narrating live events, her dream is to become a professional MC. She's introduced narrating a tournament within the Endless Mirrors. Her personal magic allows her to create any kind of solid construct.