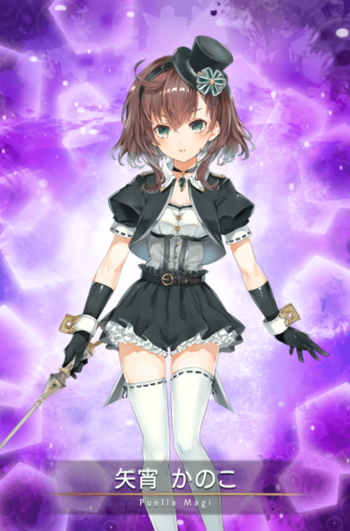 A Magical Girl who wants to become a fashion designer. The only child of a family that runs a sheet metal factory, her parents' expectations that she will take over the business stress her out. Although she gets strange looks, she is always serious.

One of the initial playable characters. She wished that her parents could be able to work another 30 years so she didn't have to take over their sheet metal factory and chase her dreams.

Her innate magic is to sew things together with thread. 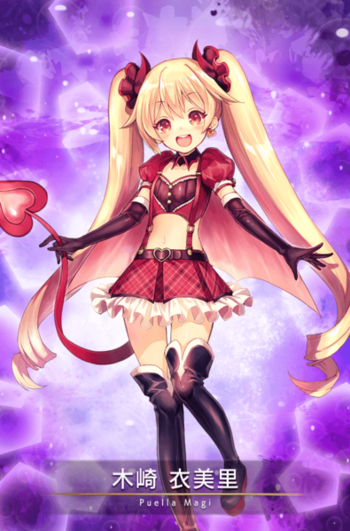 Emiri strives to be the cutest Magical Girl on Earth. She has a distinct way of talking, and likes to give everyone a special nickname. Extremely straightforward, Emiri is very easygoing. Somehow she can gain the trust of anyone in almost no time.

One of the initial playable characters. A flighty, charismatic girly-girl who just wants to have a good time. Emiri runs a "Trouble Consultation Office" where people (mostly other Magical Girls) tell her about their problems. She also works as Hinano's assistant, both as a Magical Girl and in Hinano's science shows for children. Her wish was to get closer to her "older sister".

Her innate magic is to charm people into believing anything. 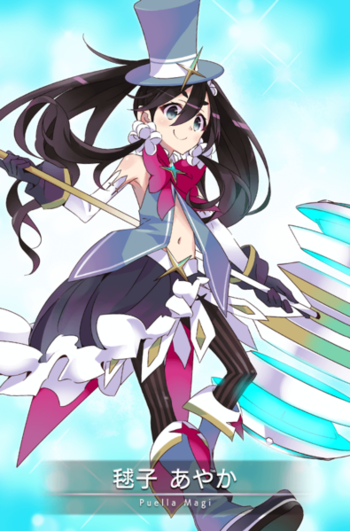 A Magical Girl who used to be dark and pessimistic but is now bright and optimistic thanks to her wish. Unlike her old self, she has a positive attitude no matter what happens. However, beneath that smile, she sometimes feels guilty about her new, fake outlook on life.

One of the initial playable character. A formerly gloomy girl who was often shunned in favor of her more cheerful friend, she made a wish to become bright and cheerful as well.

Her innate magic is to turn things into harmless jokes. 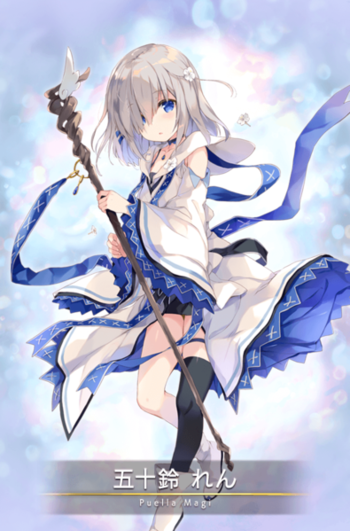 A Magical Girl who has been shy since childhood. Feeling that life was painful, she blamed herself for her loneliness. It was her fellow Magical Girls that led her out of this despair. Though she's grown stronger mentally, she still has a timid side.

Debuted on September 15th, 2017 as the main character of the "My Diary With You" event. Her wish was to live after she attempted suicide. Although she was able to defeat the Witch behind the bullying at her school, her inability to erase the evil in Kamihama broke her heart, and she was ready to end it all once more until another Magical Girl, Rika, managed to pull her up out of the depths of despair, after which they began working as a Magical Girl duo.

Her innate magic is to put spirits to eternal rest. 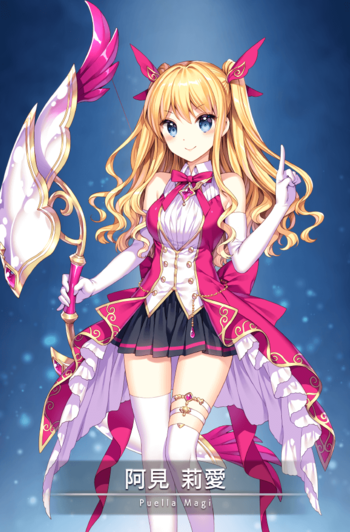 A Magical Girl who moonlights as a fashion model. Often dubbed one of Kamihama's foremost beauties, she can't stand the thought of not having the spotlight, so she always puts herself at the front of anything she's involved in. She acts confident, but from a bystander's perspective she's a little incompetent.

She made her playable debut in April 23th, 2018 and is a major character in the "Wait, You've Got It Wrong!" event. A fashion model who is famous even outside of Kamihama, she is vain and self-centered but has a good heart. She wished to become beautiful, and for everyone to think that she's always been that beautiful.

Her innate magic is to hide something's location. 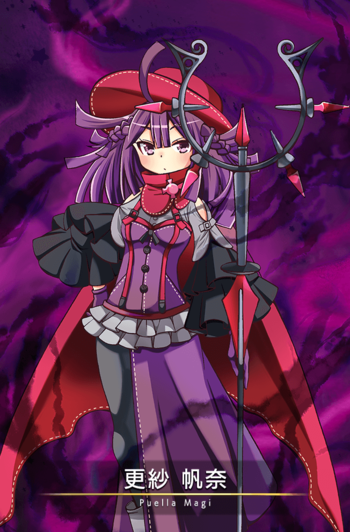 An introvert, this Magical Girl isn’t good when it comes to people. Oppressed at both home and school, she hates the world. After her contract was made, she encountered something that changed her strange fate even further. Although eccentric, she loves animals.

Debuted on May 24th, 2018 and plays an important role in the event The Flowers' Lament. Her wish was to erase her bullies from existence. Her innate magic is to copy another Magical Girl's magic. 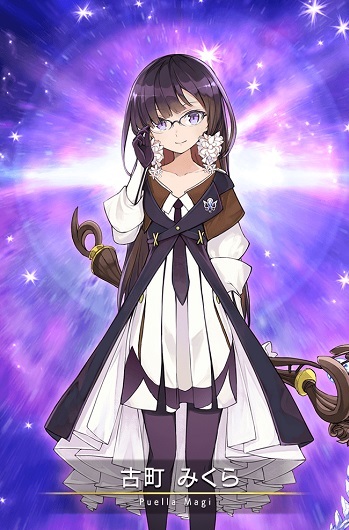 A Magical Girl who belongs to the History Research Club at Kosho Academy. She serves as the head of the club. Although she has a top-class academic record, she loves history anyways and the trend is attracting attention at the school. She is particularly enthusiastic about examining the historical sites and literature of Kamihama, and devotes herself to her research every day.

Introduced on November 29, 2019 as a main character of the Rondo of Oblivion Sleeps for Eternity event. A member of the History Research Club at Kosho Academy, she and her fellow-club members Seira and Temaria want to make a movie in order to keep their club alive. However, they end up dredging up the hate-filled history of Kamihama in the process. Her innate magic is to resurrect the history from any historical artifacts she finds. 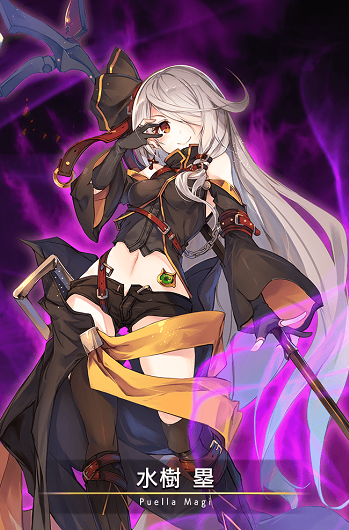 A delusional Magical Girl with Chuunibyou. Imagining herself as the reincarnation of a legendary overlord who led his army to victory thousands of years ago, her head is filled with stories of herself as a dark hero chasing "Them." She's aware of how embarrassing these delusions are, and she normally hides them.

Debuted on May 1, 2020 as the main character of the event I, the Reincarnated Overlord, Magnificently Thwart "THEIR" Conspiracy!! She is very fond of her pet cat; after she discovered that it lost its vision due to a rare disease, she wished for Kyubey to restore it. Her personal magic allows her to see how close someone is to death. 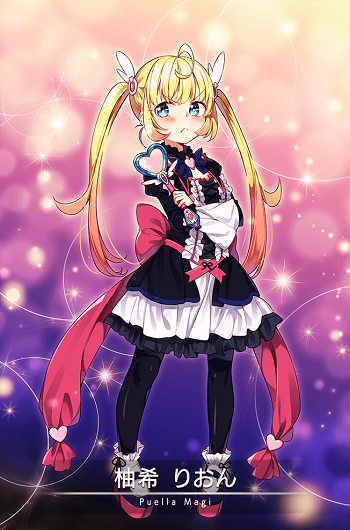 A Magical Girl with an extreme sister complex, she is incredibly possessive of her older twin sister. She treats anyone who approaches her sister as a nuisance. Her jealousy is what causes all of her anger. Even though she loves her sister so far, her expressions of love have become twisted, which leaves her running in circles. She worries that her older sister doesn't reciprocate her feelings.

First introduced in the Moon Viewing is After an Elegant Tea Party event, she was made playable on May 29, 2020. A young Magical Girl who is the twin sister of Hotori. Her wish was to undo the events that led to the death of her sister. 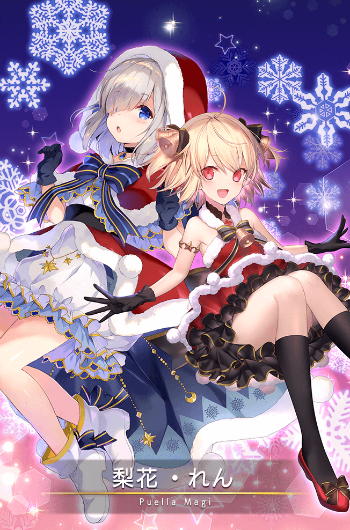 Magical Girls who deliver happiness to the town at Christmas. From cakes to auroras, anything is possible when their two hearts are one. Their favorite thing is a giant snow globe. Whenever Magical Girls meet within this Christmas space, there's sure to be a fun party.

Released on December 16, 2019 as the main characters of the "The Page I Write on the Holy Night- From Here, With You" Christmas event. A duo unit consisting of best friends Rika Ayano and Ren Isuzu, dressed in their Christmas best. Santa Mitama and a talking Oscar familiar named Chu gave them the power to make any dream come true, so long as their hearts are united, and they're sent on a mission to eradicate the cowardice of Kamihama's citizens.