open/close all folders
The Fitzgerald Sisters (All three films) 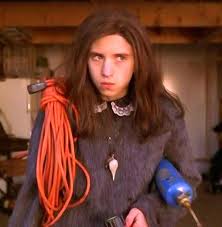 The plainer younger sister of Ginger Fitzgerald. She is devoted to finding a cure for Ginger's werewolf condition, though she ends up killing her in self-defense. In the second movie she finds herself struggling with a werewolf curse of her own.

A very similar girl also named Brigitte lived in the North American frontier in the early 1800s, and is one of the heroines in the "prequel" Ginger Snaps Back. 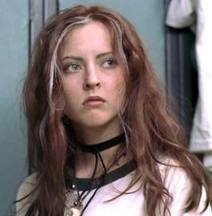 Brigitte's older sister and best friend. She is obsessed with death and the macabre, and has over the years more or less shaped Brigitte into becoming like her. After being bitten by a werewolf in the woods the night she gets her first period, Ginger finds her body changing, and becomes sexier, more outgoing, and more violent.

A very similar girl also named Ginger lived in the North American frontier in the early 1800s, and is one of the heroines in the "prequel" Ginger Snaps Back.

A drug dealer who hangs around Brigitte and Ginger's high school. He helps Brigitte develop a cure for Ginger.

Ginger's "boyfriend", a stereotypical cocky teenage boy who was infected through unprotected sex with Ginger. He is cured, but it turns out to be just temporary in the second movie. Maybe.

Ginger and Brigitte's constant bully, who, despite her rude behavior, is very popular among the other students of Bailey Downs High.

Ginger and Brigitte's overly perky mother. She mistakes Ginger's transformations for normal changes during puberty. She's also a little bit crazy, to the point where she finds Trina's dead body, and even plans on burning down their house and run away with them.

The sisters' father. He really isn't all that involved in their lives, although he seems to notice that what's happening to his daughters isn't normal.

The school's guidance councilor. He is confused by the Ginger and Brigitte's antics, and like the others don't understand them. He is Ginger's first human victim not counting Trina.

The Beast of Bailey Downs

The werewolf that terrorized Bailey Downs before Ginger. He was the one that bit her, and was run over by Sam shortly after. Not much is known about him, but it's sometimes hinted in the prequel and sequel that Bailey Downs is home to many, many werewolves.
Advertisement:
Characters in Ginger Snaps 2: Unleashed

An odd little girl Brigitte befriends in the second movie. She lives in a rehab clinic/hospital with her grandmother, who is a patient. She finds out Brigitte is a werewolf and tries to help her out. She even helps her escape the clinic. It also turns out she put her grandmother in the hospital in the first place, and is planning to use Brigitte to kill her "enemies".

A corrupt worker at the rehab clinic. He sells the patients drugs in exchange for sex. He tries to pull this stunt on Brigitte, but naturally it doesn't work. On the other hand, he behaves altruistically towards Brigitte and Ghost on many occasions, so it's hard to judge him. He was killed by the mysterious male werewolf, shortly after being framed of rape by Ghost.

The director of the rehab clinic Brigitte was placed in. She doesn't know that much about her, but is concerned that Brigitte is poisoning herself due to her Monkshood addiction.

A male werewolf that stalks Brigitte throughout the movie. He intends to mate with her and really doesn't take no for an answer. His true identity is never revealed.
Characters in Ginger Snaps Back: The Beginning

An aboriginal werewolf hunter in Fort Bailey. He is determined to make sure that Ginger and Brigitte pull through to fulfill a prophecy he heard as a boy.

The leader of Fort Bailey, which is constantly under siege of werewolves. One of them kills his wife and infects his son, whom he keeps hidden in the fort.

The resident preacher at Fort Bailey, a fanatical religious zealot. He is distrustful of the sisters, seeing them as evil. His paranoia is intensified by the constant werewolf attacks on the fort.

A veteran of the War of 1812, and the Sergeant Major of Fort Bailey. He is less paranoid about the sisters, but is enough of a jerk that he attacks them anyway, simply for being out at night. That's far from the worst of it.

Wallace's son, who was bitten by werewolf that killed his mother. To avoid being killed, Wallace hides him in his house.

The oldest man in the fort, a doctor who inspects people for sings of infection.

A French trapper and sometimes crony of James. He marches a guard post on the walls. His brother Jean-Pierre is captain of the overdue supply barge.

A husky, middle aged trapper and the father of Milo.

A member of the fort's company who helps the sisters get settled.