The Realistic Mathematician
"The limit is infinity!"
Voiced by: Andres Velasco y Coll

Dive was raised in West Philadelphia with his fraternal twin brother, Kick. When trouble brewed at their local park, the boys’ mother sent them to live with their Uncle Sensei in Bel Air to learn how to Divekick. Dive strives to perfect the art of diving into the air, using his love of math to ensure that he is always at an angle that will lead him to victory. His massive study sessions and dedication to his schoolwork have left him with less time to focus on his kicking, however. 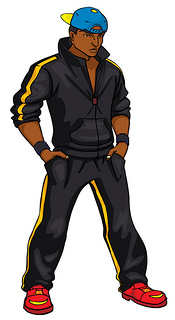 The Cool Ladies Man
"What you want? My autograph?"
Voiced by: Zaid "RedRapper" Tabani

Kick was raised in West Philadelphia with his fraternal twin brother, Dive. When trouble brewed at their local park, the boys’ mother sent them to live with their Uncle Sensei in Bel Air to learn how to Divekick. Kick strives to perfect the art of kicking, and is sure that success on the Divekick circuit will help him launch a music career. His focus on chasing the local honies has lead him to neglect his dive training, however. 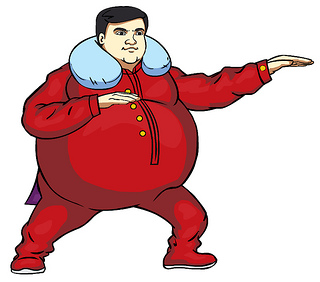 The Bracket Rigging Scum
"Someone give me a stick to borrow?"
Voiced by: Marcus Fontana

Uncle Sensei may have sent Mr. N to the losers bracket, but his career ended later that day after Mr. N paid a massive sum to have the brackets rigged in his favor. Officials noticed the foul play too late, and the tournament was in such disarray that the entire event was cancelled and everyone was disqualified. Unable to afford fees for the following year, Sensei was forced into retirement. Mr. N can usually be found riding to coattails of his best friend, upcoming Divekick superstar Dustin Weinburger, and is usually behind any sort of foul play that may occur at a tournament. Mr. N owes the mob a lot of money, and is constantly on the run. 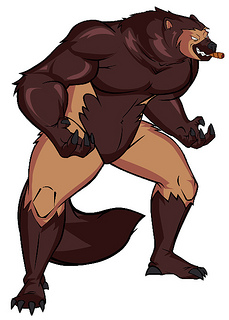 A pregnant Skunk Bear was forced to flee her Canadian homeland due to hunting activities. While traveling south, tired, hungry and alone, she drank some toxic waste that mutated her into a much larger, smarter form. She caught the scent of a very rare type of cigar and followed it to the hills of Bel Air, where she settled and now lives with her three Kits. 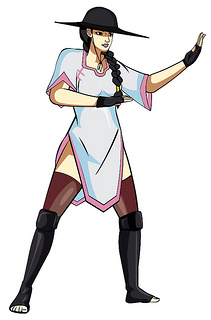 The art of the Divekick is well known in a parallel dimension, called Downworld. Kung Pao is champion of this realm. Her strength, loyalty, dedication, and leadership may be unmatched, but her world has been overthrown by her evil step-father, Theodore Khan, and his army of color coded ninja thugs. She fought alongside a small but passionate group of rebels until she accidentally kicked a hole in the fabric of the universe and fell through it. She landed in this dimension and has thus far been unable to find a way home to save her friends, and her world.

The Brilliant Beauty
"To face Foot Dive is to face one's end!"
Voiced by: Kate McGroarty

Shoals is the youngest and brightest Podiatrist in her field. She works mostly in the sports medicine field, and spends time researching Ped Urino, a very rare infection seen only in the feet of professional Divekickers. Shoals wakes up one morning to find that she has somehow contracted Ped Urino, commonly called Foot Dive, on her face! She dons a mask and builds powerful iron boots to allow her to compete in Divekicking competitions, in an effort to get closer to the people she’d need to study to find the cure. 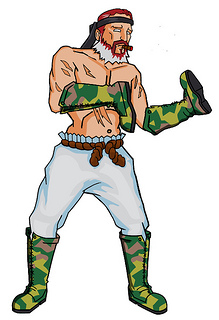 The Empty Wallet
"Go for broke, man. I certainly did."
Voiced by: Mike DeBonis

Uncle Sensei and his sister became obsessed with tournament Divekicking at a very young age, even before the sport had any popularity. After returning from the Invasion of Grenada, Sensei had finished his tour of duty and saved enough money to finally follow his dream. He purchased some land on which to build his Dojo and entered his first Divekicking competition. Shortly after, his 10 year winstreak helped to explode the sport’s popularity, but his inability to manage his finances left him broke and in early retirement after a mysterious disqualification. He now spends his days trying to earn what he can training Divekicking students at his Dojo, and doing his best to take care of his beloved nephews, Dive and Kick. 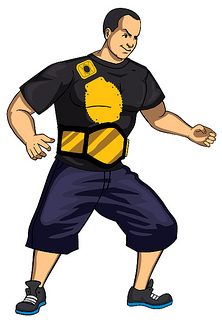 The Best There Is
"This is NOT the situation!"
Voiced by: Julian Smith

Jefailey runs a large and well known series of Divekick tournaments called JEO (Jefailey Effort Orlando). Despite controversy, Jefailey likes to enter and compete at his own events. He views himself as his greatest promotional asset, and his growing ego has recently caused former allies to turn against him. He means well, however, and will continue to compete in order to get more people to buy badges for the next JEO event. 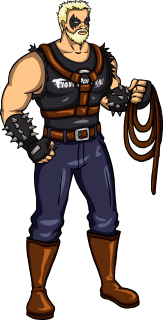 The Unwanted Wanderer
"Can you feel the storm?"
Voiced by: Chase Ashbaker

The Baz has been rejected from almost every fighting league on the planet, usually because he looks too lame or his fighting style doesn’t fit in. He joins the Divekicking league as a last resort, due to their incredibly low standards. The Baz hasn’t won any money Divekicking just yet, so he is forced to take on odd jobs for Mob Boss Don Luo to pay his bills. He is currently tracking down Mr. N for a debt owed to the Don. 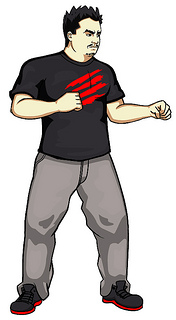 Markman is an inventor, and a huge fan of professional divekicking. While watching his favorite fighters throw down over the years, he has perfected a device that gives its holder more precise control over their kicks. And thus, the Kickbox was born. Markman is on a marketing quest, and wants to win this year’s competition using his Kickbox to show the world that they should buy his product. 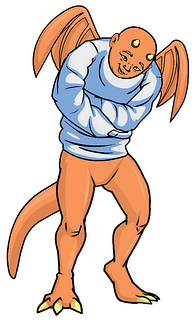 The Brave Troll
"Is this a major?"
Voiced by: Joey Gilmore

Stream lives his life trapped behind the keyboard, gazing into the warm glow of a monitor that pumps free content into his eyes 24/7. Instead of appreciation, he feeds only negativity back in. His conciousness is an endless flood of sexism, racism, and hate. Stream is only satisfied when he can make someone uncomfortable or upset, and so he sets out into the real world to finally troll in person.

The Shaper Of Worlds
"If you want to get something done, do it yourself."
Voiced by: Mike DeBonis

S-Kill is the leader of an evil organization hell bent on re-balancing the entire world so that it can be repackaged and sold once again. When S-Kill’s subordinates fail to rebalance professional divekicking, S-Kill sets out to do the job himself. 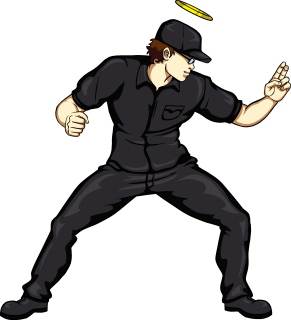 The Angelic Copycat
"My hobby? Playing with powerful opponents, of course."
Voiced by: Adam Heart

After a very close loss to superstar Dustin Weinburger in his very first Divekicking competition, Kenny fell ill and lost his life later that day. Mr N. had unleashed a vial of the dreaded Foot Dive bacteria into Kenny’s shoes, but Kenny could only watch from the heavenly world above as Mr. N was acquitted. Kenny went on to win five straight Divekicking tournaments in heaven, earning him a second chance on Earth. He now fights to prove that he has the right to exist. 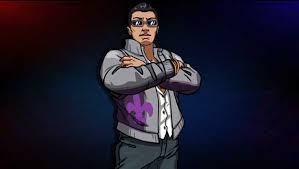 "God it feels good to be outta that vat!"
Voiced by: Andres Velasco y Coll
The Fencer 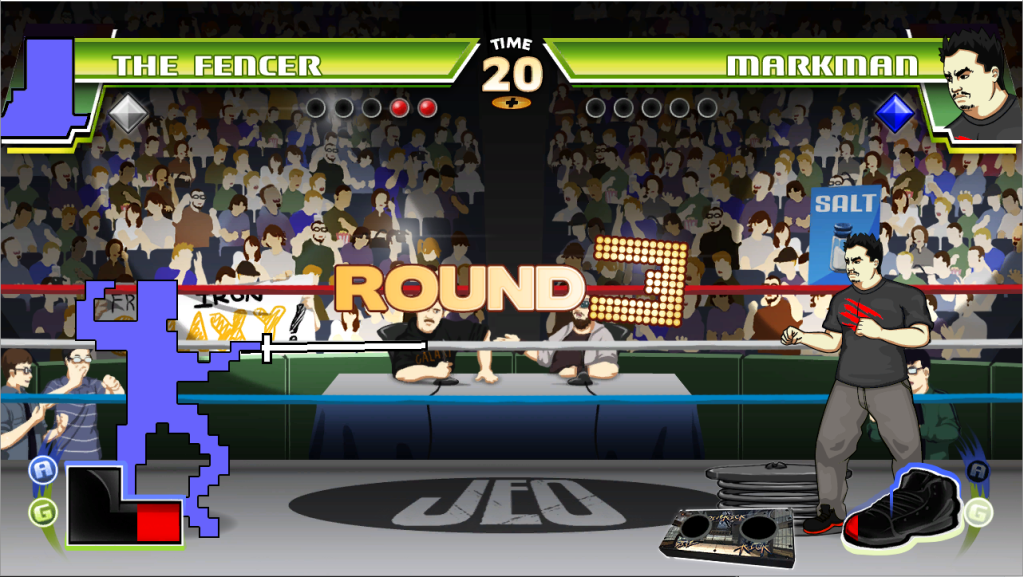