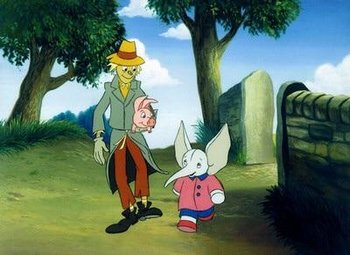 From left to right: Scarecrow, Pinkey and Mumfie
"Who can you rely on when the chips are down?
Call on Mumfie when you need defending,
Braver than a bulldog, brighter than a clown,
Here comes Mumfie with a happy ending!
With his faithful friend, the Scarecrow,
He's got dreams enough to share,
So, if you want adventure, this is where to start,
If you need a hero, who can play the part?
The little pachyderm with a great big heart!"
Advertisement:

Magic Adventures of Mumfie is a 1990's animated series/movie created by Britt Allcroft of Thomas & Friends fame. It centers around Mumfie, a special elephant who lives alone in a cottage in the woods. Every morning he runs to his letter box hoping for an adventure tied up in a parcel. One day, Mumfie realizes that this is not possible and sets off to find one. Along the way, Mumfie meets a lot of friends, such as Scarecrow, Pinkey the Flying Pig, and a whale who doubles as a passenger cruise ship.