Web Animation / The Adventures of 10ACraft 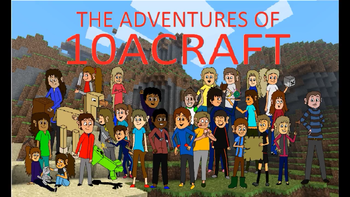 Above - The Adventures of 10ACraft: Offical Logo.
Advertisement:

The Adventures of 10ACraft is a YouTube series made by TheSuperArtistGamer, made in Mine-imator and styled in a sort of comic-like format (although the series is made in an animating engine, the episodes themselves consist of still images that portray the action, similar to that of a web-comic). The series is centred around a group of classmates as they try to live their lives in the world of the popular video game Minecraft. It currently has 2 seasons, including specials and even a Scratch game dedicated to the series.

According to a video uploaded on TheSuperArtistGamer's gaming channel on August 2020, the series itself has officially ended with the wrapping up of Season 2; although it was stated that he has plans to make an animated reboot of the series, he is currently taking a break from large scale projects due to personal issues; thus marking the end of the franchise for the time being.

The Adventures of 10ACraft provides examples of:

Below are tropes associated with the Episodes themselves. The folders are categorized by season, and the folders themselves contain a bundle of episodes in order.

Episode 25 - A Trip down Memory Lane!