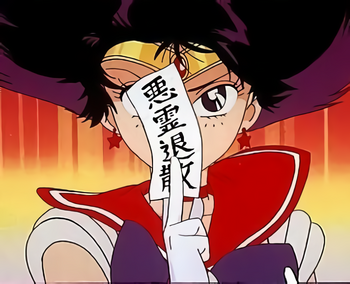 These paper tags, also known as "ofuda", are used in Shinto and Onmyōdō for purification and exorcisms or as wards. They are sometimes used with Shide, and most commonly at Shinto Shrines or by Miko.
Advertisement:

Taoists also use a version of the tags called Fu. In Buddhism and Hinduism they are called Sutras. In Korean shamanism they are known as Pujok.

The western equivalent would be a conspicuously-placed rosary or crucifix, although it was common practice in the Middle Ages to use thin parchment prayer scrolls and wax seals in a similar fashion.

In Anime and Manga they can do anything, even explode. If in the form of a card, a Death Dealer may use these.

Compare with Paper Master, a form of Functional Magic that uses paper.