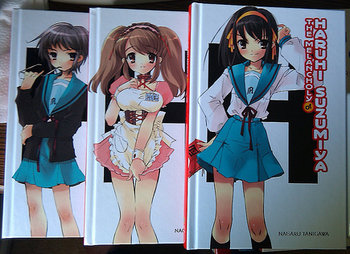 "Don't you think it's a fun idea, someone being reborn as the Raiden Shogun? That's all that light novels are supposed to be - a bit of fun."
—Yae Miko, Genshin Impact
Advertisement:

While related to Manga and Anime, light novels are actually prose, written in short paragraphs and conversational language for fast reading. Light novels are very popular in Japan, chiefly among teenagers and young adults. Back in the 2000s and early 2010s, very few of them had made their way to English-language markets, but this changed around 2013 when Yen Press created a successful strategy of marketing them to the people who read novels and not just anime/manga fans. There are also a relatively large number of translated yaoi light novels. Due to the nature of the illustrators, many Light Novels out at the moment are Ecchi to capitalize on their talents.

The term light novel is a misnomer. While many people believe that the word "light" in the name means the novel is short (and they usually don't last much longer than 200 pages, somewhere between a long novella or a very short novel) or that it uses manga-style illustrations, the truth is that this actually refers to the text inside. Modern light novels use simpler, easier-to-read everyday kanji as opposed to "hard" novels, which generally contain much older words which, even for Japanese readers, may necessitate keeping a dictionary on hand to understand. This distinction is Lost in Translation because Japanese is one of the only languages in the world where multiple writing systems are routinely used in the same sentence. The closest parallel in the Western world is probably the distinction between mass-market popular fiction and higher level literary fiction.

Light novels commonly get adapted to Manga and Anime, and more often than not are promptly displaced by said adaptations outside Japan for the reasons stated above. This is so common that some light novels are mistakenly believed to be anime or manga even if they don't have such an adaptation, or, oddly, that every Japanese-derived book adapted into anime/manga is a light novel regardless of text simplicity.note Legend of the Galactic Heroes is an example of a non-light novel Japanese book series adapted into anime. Sometimes it may be the other way around, and a manga or anime project may get a Tie-In Novel or Novelization in the form of a light novel. Either way, due to the close-knit relationship between the media and their habit of sharing illustrators, light novels have come to be seen as manga and anime's text-based cousin.

The light novel genre is Older Than They Think, existing in some form at least since The '80s, when authors like Hideyuki Kikuchi and Baku Yumemakura made a career out of light, fantasy-oriented short novels. With the rising popularity of Hajime Kanzaka's Slayers, followed by Kouhei Kadono's Boogiepop Series a decade later, light novels started taking their established format, which eventually took a jump in the 2000s with Shakugan no Shana and A Certain Magical Index, the point in which the genre became inextricably joined with the anime and video game business. The peak of the wave came in 2006 with Haruhi Suzumiya, after which light novels basically skyrocketed in popularity and number. Some of the last seminal works, like Sword Art Online, still redefined the genre in new ways, popularizing elements like the Harem Series and the Isekai sub-genre, which are near-ubiqutious in the light novel market today.

Chinese-language literature has a somewhat similar phenomenon, particularly in Taiwan, though there is also a growing online force on Mainland China. Although the term "light novel" is not typically used in China for such works,note Very few of the works below fits the common beliefs and definitions about LNs mentioned above. On Mainland China, the term "Light Novels" ("轻小说") is generally used to refer to Japanese LNs for convenience they will be listed here, though expect them to be listed under the Literature namespace (because most, if not all of them are Web Serial Novels).

The rough Western equivalent would be Young Adult Literature, which is typically aimed at teenaged and up readers (with the upper age, depending on the authority, ranging from 25 to 34), or Pulp Magazine due to its escapist plots and Beige Prose style. However, publishers are making efforts to market light novels to adult readers, while there are several Young Adult and even Children's books that aren't "light" by any stretch of the imagination (the later Harry Potter books come to mind).

Light novel series with pages on this wiki:

(Series marked with a * have a North American release at least in part.)