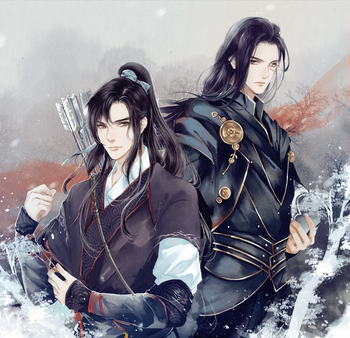 "The first person to dig ziliujin out of the ground could never have predicted that what they dug out was the beginning of a dog-eat-dog age. Our entire life was but an ugly confidence game of greed; this is something everyone knows, but that they could not bring to light.
From where did this con begin? Maybe from atop the first clean white canvas sails of a foreign ship that sailed across the ocean, or from beneath the great wing of a Giant Kite as it rose unsteadily into the skies — or from a time even before that: as the spreading ziliujin, like an ink stain upon the earth, turned the great plains of the wild north into a sea of flames.
Advertisement:
Or maybe it was when We... when I met Gu Yun in a world all covered in ice and snow."
— Chang Geng

(杀破狼) is a steampunk danmei novel written by Priest. It is published first on the Chinese web novel site JJWXC.

From the summary according to NovelUpdates: In the age of the Great Liang Dynasty, the lives of the people were made convenient with steam-powered machines that run on a fuel named ziliujin ("purple flowing gold").

Chang Geng, who lived in a small countryside village, shared a distant relationship with his mother while his stepfather was away most of the year round, and the only people he was close to were two little kids, the village teacher, and his yifu (adoptive father).

But his life was flipped upside down one day following the barbarian tribes’ invasion, and it turned out that his entire identity had been an illusion – not only was Chang Geng himself not the country boy he thought he was, but also his mother, his teacher, and even his beloved yifu...

The novel is 128 chapters long with 15 extra chapters. There's an ongoing English translation; the first chapter

is translated by 2333Translations, with Northwest Flower Translations providing the translation for the following chapters

The novel has been adapted into an audio drama, which consists of three seasons, and is available on MissEvan (Season 1 here

). An Live-Action Adaptation was also greenlit, but the production was delayed due to the COVID-19 pandemic.

A Live-Action Adaptation has been greenlit in 2020, and will star Chen Zheyuan as Chang Geng and Tan Jianci as Gu Yun.

Not to be confused with the 2005 Hong Kong action movie featuring Donnie Yen.