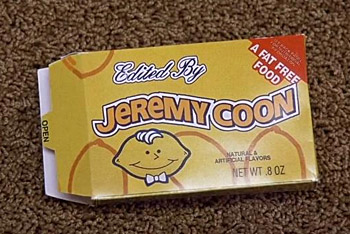 A lot of times in the media, credits are just words that fade in and out of the video put in during the post production process. So in most media, a common way to have some variety in the credits is to have them actually exist in the world of the characters. The producer's name on someone's index card, the director on that billboard over there... the sky's the limit. Nobody ever notices or comments on these oddly labeled items.