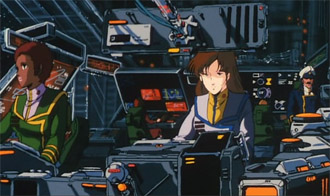 The Bridge Bunnies in their natural habitat.
"Say, is this a ship of the Valkyries? Or have you human women finally done away with your men altogether?"
— Q, Star Trek: Voyager ("Death Wish")
Advertisement:

Someone other than The Captain needs to actually run the Cool Starship, which is where the Bridge Bunnies come in. They're a few young, attractive twentysomething women (see Office Lady) who practically live on The Bridge, and deal with opening hailing frequencies, giving orders to the pilots of the Humongous Mecha squadrons, reporting that the Readings Are Off the Scale, activating the Applied Phlebotinum, repeating whatever the computer is saying, warning of Negative Space Wedgies, and the like. A staple of Japanese anime shows that feature large capital ships—technically, said shows will usually include male personnel on the bridge, but the bunnies are much more likely to get names (and fans), unless said others are genuine characters and not scenery (as mentioned below).

Off duty, they're frequently romantically paired with minor characters or can be the Girl of the Week. They're invariably female, although a token male junior bridge officer may be sufficiently intimidated by them to serve as Comic Relief. Token males in this position will also likely be swinging their bat the other way unless someone else on the crew fills that role. Depending on the protagonist's role on the ship, Those Two Guys may also work on the bridge with the Bunnies.

Less common in Western shows these days, where bridge personnel are more likely to be competent professional officers of both sexes. Women on the bridge aren't necessarily Bridge Bunnies per se, nor are junior officers doing menial jobs... but a bridge full of young, pretty female junior officers, and on which all of the senior officers with real authority are male, is a textbook example of the trope (compare Office Lady). Go back far enough, and most western shows will completely lack any sort of female bridge personnel (their inclusion was considered very radical in the original Star Trek) with the understanding of naval warships being an inherently manly profession (look at any major warship on either side of the classic Star Wars films).

A specialized version of Mission Control, with all the twists therein possibly applicable. They occasionally serve as Those Two Girls, commenting on the action and what's going to happen next.