Literature / The Once and Future King
aka: The Sword In The Stone 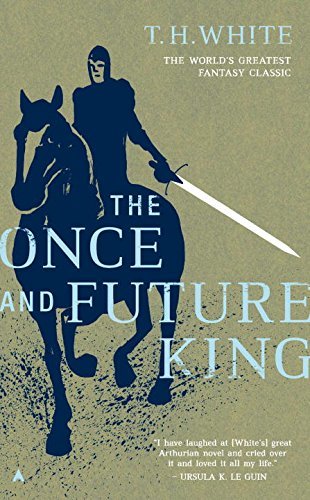 Rex quondam, rexque futurus
"I will tell you something else, King, which may be a surprise for you. It will not happen for hundreds of years, but both of us are to come back. Do you know what is going to be written on your tombstone? Hic jacet Arthurus Rex quondam Rexque futurus. Do you remember your Latin? It means, the Once and Future King."
— Merlyn
Advertisement:

The Once and Future King is a retelling by T. H. White of Arthurian Legend. It is considered one of the best of its kind, heavily inspired by Le Morte D Arthur. It was originally published as separate books from 1938 to 1941 and collected in one volume in 1958. The 1958 version contains:

The first three parts were published separately first, and revised to a greater or lesser extent for the collected edition. The biggest change was probably to the second part, which was substantially altered and given a new title, the original version had been entitled The Witch in the Wood. Another notable change was the omission of the witch, Madam Mim and her wizard duel with Merlyn from "The Sword in the Stone" (which can still be found in the original version still in print and the Disney film).

White also worked on a fifth part set before Arthur's final battle, in which he was taught more lessons by Merlyn. Parts of it were incorporated into the collected edition's version of The Sword in the Stone. In 1977, after White's death, it was published separately as The Book of Merlyn. Some recent editions include it in the main volume as Book 5, with an editorial note to explain the material White reused for the original publication of the one-volume edition.

The Once and Future King provides examples of the following tropes:

The BBC's 2014 radio dramatization of The Once and Future King provides examples of the following tropes:

Alternative Title(s): The Sword In The Stone