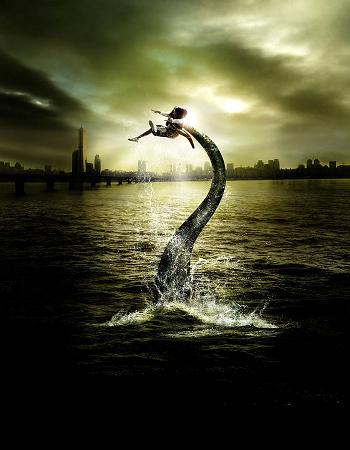 This page is for the 2006 South Korean film. You may be looking for the 2013 film adaptation of the Stephenie Meyer book of the same name, or the 2020 horror film Host.

The Host (or Gwoemul,note  Korean for “monster” as it's known in its home country) is a 2006 South Korean film co-written and directed by Bong Joon-ho. As is the case with Bong's other works, the film combines aspects of multiple genres with consistent Black Comedy elements, and can thusly be described best as a political satire crossed with a family dramedy in the dressings of a kaiju movie.

After an American military pathologist stationed in Korea orders his associate to dump over a hundred bottles of formaldehyde down the drain, sightings of a strange amphibious creature in the Han River emerge years later, with fish in the river mysteriously dying off.

It's now the year 2006; a man by the name of Park Gang-du owns a local snack kiosk with his father, Hee-bong, with the rest of their family living together. While working, the previously-thought-to-be-myth creature suddenly makes landfall and starts attacking locals, attempting to feed on anything that gets in its path before disappearing back into the river's depths, but not before eating some of its victims and taking Gang-du's daughter, Hyun-seo, with it.

Afterwards, the government and the United States military quickly arrive and announce that the creature has been subjected to an unknown virus, and soon quarantines the population that made contact with the creature, including Gang-du and his family whom tried to fend off the creature during its rampage.