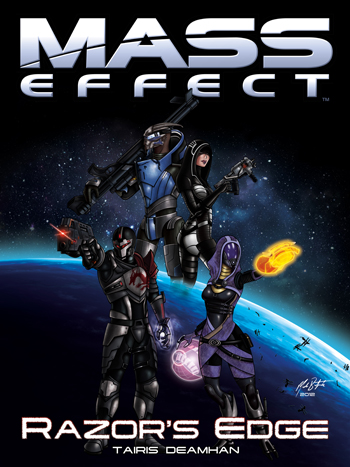 The first installment in the series, Razor's Edge

picks up right after the ending and deals with the events of Lair of the Shadow Broker. The third installment in the series, Razor's Edge: Requiem

features the events of Mass Effect 3.

The trilogy focuses strongly on a Shepard/Tali pairing, with much expansion to the canon plot as well as copious helpings of Character Development.

Note that the Shepard featured has a combination of the Spacer and Sole Survivor backgrounds, with a smashing of Colonist added in for flavour.

For tropes relating to the original go to Mass Effect.