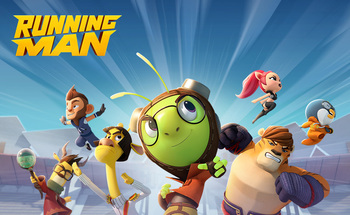 Presented in this page are the Expy of the Running Man cast based on their Animal Motifs. For the live action casts, visit the tropes page in this link.

For the main page of the animation, visit this page.

of the Running Man channel.

The 7 Participants of the 100th Annual Running Man Championship

Tribe: Bug
Expy of: Yoo Jae Seok
Voiced by: Kim Seo Young (Korean) ; Rachel Slotky (English)
"No matter what happens in life, when you're together with friends, you can do anything!" 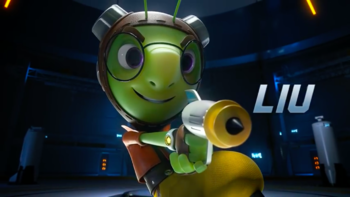 Liu is 16 years old and the new Running Man contender of the Bug tribe and the younger brother of the tribe's former competitor who disappeared for unknown reasons. As Yoo Jae Seok's Animal Motif, Liu has the ability to jump from a far distance or great heights and can sense any signs of occurrence or danger from his antennas.

He is the show's leader as he possesses intelligence when winning a game whether if it's a team or a solo game as well as creating inventions from the pieces he could find. Liu also has a robot companion named 'Mr. Suitcase' (from the Cartoon Network English Dub) that stores his weapon, the Drill-Gun.
In Episode 35, Liu had an untimely reunion with his long-lost sister who became Brainwashed and Crazy. He was able to save her from Charming Gold's control in Episode 40.

Tribe: Bars (Tiger)
Expy of: Kim Joong Kook
Voiced by: Um Sang Hyun (Korean) ; Daniel J. Edwards (English)
"This was our strategy. A great one. And we'll fight another day." 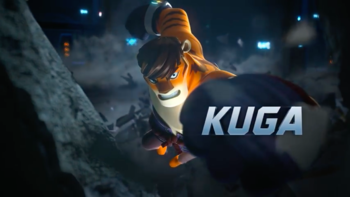 A 16-year old trained warrior tiger who punches everything he sees in order to win. Kuga wanted to test his own power by joining the competition. While his tough exterior makes him intimidating towards his opponents in the game, he's really a gentle giant.

While his secret is hidden underneath his 'pink' palms, he has the power to generate shockwaves via a Charged Attack punch to increase his level of impact when hitting an obstacle. It would sometimes leave a four-toed paw print on the craters. 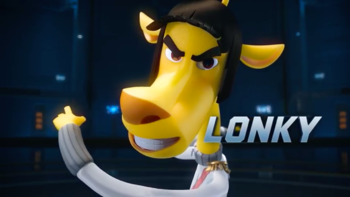 Days where he didn't betray anyone - 0
The 15-year old so-called 'Giraf Prince' who is currently on the 49th rank of his own tribe. Therefore, he competes in order to become king. Similar to his Expy, Lonky has the tendency to become allies with his teammates only to backstab them in return.

Lonky has the ability to stretch his arms and neck. In which, he and the others can use the Rubber Man limbs to either restrain an opponent or grab hard to reach objects.
Miyo
Miyo (미요) 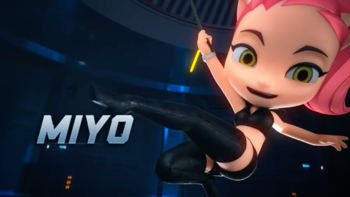 16 years old. She was chosen from the Nyanya tribe to compete in the Running Man championship and the only female contender. With the physique based on a cat, Miyo is applicable in stealth and agility with grace. She is equipped with a grappling hook, a scanner on her belt buckle, and a flash drive used for hacking. Her attire is identical for someone who belonged to a spy agency, which is justified as she entered only for a mission given by her superiors.

In addition, Miyo has the ability to enter a person's memory by applying a Pressure Point to her target. Afterward, she can read the memories of that person. This becomes handy when doing spy work against the Big Bad Charming Gold. 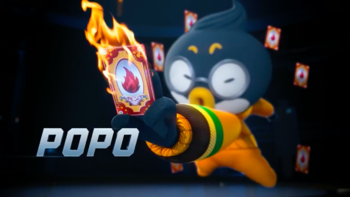 Playing with Fire through tarot cards

The 15-year old Peng tribe resident who wanted to do anything to win the competition just to get fame and fortune. Throughout the show, he is mostly seen with Lonky. They do have the same interests, but they sometimes clash when things didn't come as well as planned. Whenever he got caught in a dilemma unintentionally, Popo's eyes became large and it sparkles in hopes of not getting tagged out in a match.

Tribe: Mong (Monkey)
Expy of: Gary Kang
Voiced by: Nam Doh Hyeong (Korean) ; Matthew Shaw (English)
"If someone is a spy, then it would be unbearable for them to do it." 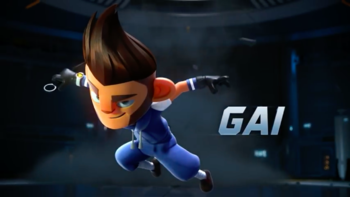 From now on, when I call you, your name will be...

Gai is 16 years old and is from the Mong tribe who has the history of the residents becoming slaves from the war. His tribe breaks out of their isolation and the leader made him a contestant. Their reason was to get the Family Honor back that was once lost from them because of their past.

He is the Ninja of the seven. Gai’s main ability is creating four until eight clones of himself, and he can sometimes teleport from one place to another.
However in The Reveal, Gai works under Charming Gold. Giving him the name of Man X and was brainwashed against the Running Man. Miyo was able to save him at the end of Episode 35.

Tribe: Empa (Impala)
Expy of: Ji Suk Jin
Voiced by: Jeon Tae Yeol (Korean) ; Mark Szabo (English)
"Uuhhh... Well, nobody in my town would be bothering to compete. I wasn't lucky enough to be selected." 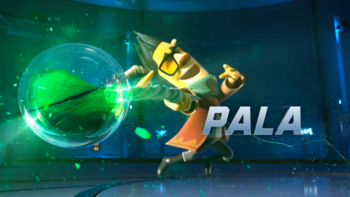 He's not too old to play this game.

Joining against his will, 38-year old Pala became the representative of the Empa tribe. He first appeared as the only competitor who fell asleep at the beginning of the opening game, only to wake up and catch up with the others.

Armed with a cane that has a glass vial on top, he carries any concoction he mixed through his Alchemy. When it comes to trouble, he's the one who heals his teammates.

Other Characters Charming Gold and the D.V 7

Tribe: Pikok (Peacock)
Expy of: None
Voiced by: (Korean) ; Daniel J. Edwards (English)
"Are you ready? Are you ready? It's...RUNNING TIME!"

Charming Gold is the current host of the 100th Running Man championship. While he has the beauty and charm from his own tribe, underneath is a mask of suspicion.
D.V 1
Sean

Tribe: Bug
Expy of: None
Voiced by: (Korean) ; (English)
"How did this happen? I thought... I thought I was in the championship..."

She first appeared in the aftermath of the Team Change Battle as one of Charming Gold's evil henchmen. She is mostly known for wearing a black attire along with a veil and a mask that covers her true face. Whenever D.V 1 is present, Mr. Suitcase emerged from Liu's belt and started to chase her much to its owner's dismay.
In Episode 35, Liu discovered that D.V 1 is actually his older sister named Sean. But because she was brainwashed, she hurt Liu and left him afterwards when she retrieved Gai's mask.
Liu told everyone that Sean was supposed to be dead right after he witnessed a red gas explosion inside her room leaving her final invention, Mr. Suitcase, to Liu. Lonky realized that he took her place for this exact reason. Sean had a one on one battle with her younger brother and she was subdued.
D.V 2
"The Kuphaman" / Master Makhan

Tribe: Bars (Tiger)
Expy of: None
Voiced by: (Korean) ; (English)
"How disappointing... Sneaking from behind like a coward... I thought all creatures would prefer to fight face to face."

The mysterious character who is known by name because of how he breathes (Khup-hah). Pala had a story about the Kuphaman kidnapping fellow Running Man contestants, this is followed by Miyo and Kuga getting kidnapped sooner or later. Because of the incident, Kuga now has a grudge against to the opponent who outmatched him because of The Super Paw.But with Liu's encouragement and risky strategy, Kuga is able to take him down without fighting in Gaining Grounds.
D.V 2's backstory is revealed. His true name is Makhan. A known warrior from the Bars tribe who was exiled by the higher ups. Charming Gold kidnapped him because he's the strongest in the tribe. Makhan's final moments before he was taken is when his Super Paw left an imprint on the side of the cliff and the red gas explosion that knocked him out.\He was eventually freed from his brainwashing when Kuga destroyed the mask. However, Kuga challenged Makhan without the Amplifier in which he accepts. The fight ends with a draw afterward.
D.V 3
Alto

Tribe: Giraf (Giraffe)
Expy of: None
Voiced by: (Korean) ; (English)
"Hmph. You watch your tongue!"

He first appeared in Battle for the Highlands who sneaks Lonky from behind and poked his eye by surprise. Alto is known to have an interaction to Rema as rivals in the episode of Gaining Grounds.
D.V 4
Rema

Tribe: Nyanya (Cat)
Expy of: None
Voiced by: (Korean) ;(English)
"Hey there, little Bug. Looks like an old friend wants to see you."

She is the second player to appear in the Battle for the Highgrounds game and Lonky's opponent in the Zone Battle. Rema is seductive to the point where her opponent froze as she began to flirt him, this ended up having Lonky's tag taken out from her.
D.V 5
Spin

Tribe: Mong (Monkey)
Expy of: None
Voiced by: (Korean) ; Matthew Shaw (English)
"You thought you could get away from me, huh? Well, I guess I proved you wrong. You kicked me in the face and now you'll pay dearly for it. I'd say that's fair. Don't you agree?"

Spin met Miyo and chased her in the second team game. He has a sadistic attitude towards her and likes to toy her much in the match. He gets mad at her for kicking his mask and that's when he gets serious.
D.V 6
Kuku

While Kuku appears to be... smaller than Popo, his tarot card abilities are more successful in attacking the Running Man competitor. This young penguin floats in midair with a card hovering above his head. And unlike his fellow D.V 7 members, aside from Dr. Mala, he doesn't wear a mask and wore a visor instead. The said visor can be lifted if he's threatened to use his charm to stop his opponents from hurting him.
D.V 7
Dr. Mala

Tribe: Empa (Impala)
Expy of: None
Voiced by: (Korean) ; (English)
"Show some respect! I am your elder, after all."

Dr. Mala is Charming Gold's secret assistant who resembles like Pala from their original tribes. His reason of joining his boss' malicious cause remains unknown.
Pala was able to recognize Dr. Mala as the banished tribe resident for practicing the forbidden magic and only joined Charming Gold is because he desires respect. Dr. Mala is the creator of a drug called the "Amplifier" that he injected to the D.V 7 under Charming Gold's control. Aside from having enhanced abilities; the side effects include the loss of self (evidenced by Gai), unbearable pain from taking it too much, and brainwashing.