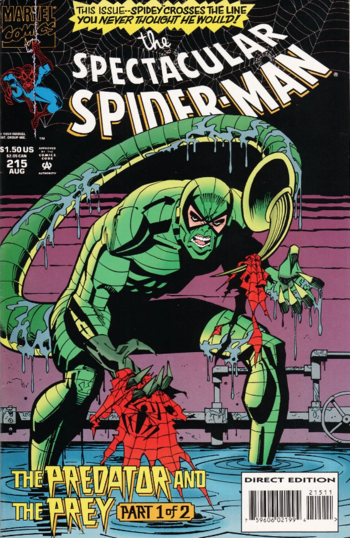 "I like to hurt things, I really do."
Click here to see him bonded to the Venom Symbiote 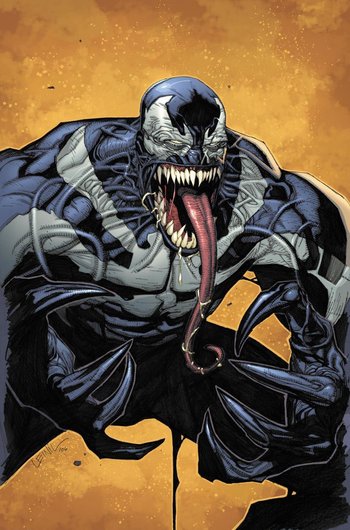 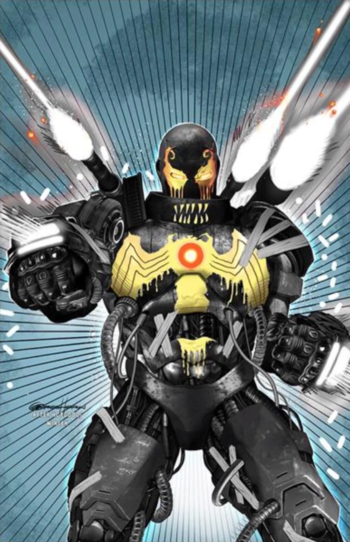 Click here to see him bonded to the Scorpion Symbiote 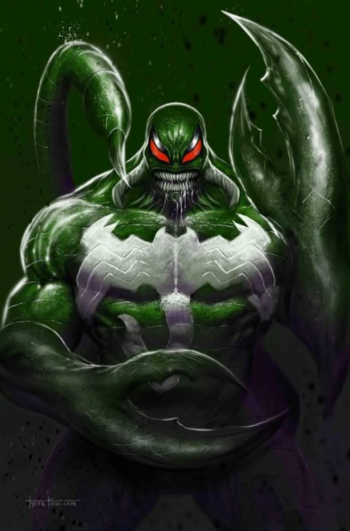 Mac Gargan was a two-bit private eye who was hired by J. Jonah Jameson to find out Peter's connection to Spider-Man. When Gargan was unable to get results, Jameson financed an experimental treatment to make him strong enough to beat the Wall Crawler. Experimented on with radiation and genetic transfusions, Gargan donned a suit based on the spider's natural enemy: the Scorpion. With his robotic stinger-tipped tail and greater strength, the Scorpion was always difficult to deal with, but Mac Gargan lacked smarts. The procedure had also driven him insane, and while he continually upgraded his suit and tail he couldn't rise above B or C-list villainy for the gallery. Ever since then, Gargan blamed Jameson for what happened.

In the 2000s, after ditching Angelo Fortunato, the Venom symbiote directly approached Gargan, offering him its power and the chance to become an A-list villain in exchange for killing Spider-Man. Gargan eagerly agrees, and becomes the third incarnation of Venom just in time to join Norman Osborn's Sinister Twelve. He was imprisoned and became a member of the government-sponsored vigilantes the Thunderbolts, taking part in the Civil War and helping hold off the Skrull Invasion. Gargan's stint as Venom is characterized by an increasing dependence on the symbiote and its powers, despite the limitations that resulted — almost like a drug addict. He became increasingly erratic and unstable, driven by the symbiote's bloodlust to commit cannibalism, even to the point of attacking his teammates while berserk and threatening to chow down on innocent civilians. During an altercation with the Steel Spider, Gargan loses control of the symbiote and bites off the Steel Spider's arm, eating it. This incident causes his teammates — and Gargan himself — to become increasingly distrustful of the symbiote's growing control over him; which comes to a head when a group of prisoners with psychic powers were imprisoned in Thunderbolt Mountain and began psychically torturing the team. Gargan willingly surrenders to the symbiote's bloodlust and rampages until being cut down by the Swordsman. Following Osborn being made the head of SHIELD, Gargan is given a drug that reverts the symbiote to the appearance it had when Peter Parker wore it, and joins the Dark Avengers, where he gleefully impersonates Spider-Man. In this guise, Mac frequently goes AWOL to take a bite out of crime, and starts a gang war to ruin Mayor Jameson's reputation. When Mac refuses to stop and pictures of him eating criminals are threatened to go public, Osborn sends Daken and Bullseye to kill Gargan, and when that failed threatens to dispose of Venom himself. After Osborn's botched invasion of Asgard, Gargan is arrested and forcefully separated from the symbiote by the government, who begin researching ways to weaponize it for the American army. Without his armour or the symbiote to stabilize the genetic degeneration caused by the process that gave him his powers, Gargan's health begins to deteriorate until he is broken free by Alistair Smythe and outfitted with a new Scorpion suit.

Gargan's subsequent run-in with the symbiote occurred years later, when Lee Price volunteered to join Black Cat's crime syndicate. Suspicious, Gargan was tipped off that Price had bonded to the symbiote and later ambushed Price in order to kill him — outwardly wanting to kill the symbiote but secretly desiring to reclaim it for himself. After Eddie Brock reclaimed the symbiote, Gargan attacked him but was knocked out when the symbiote exploited his fear of it to destroy his advanced Scorpion armor. When Lee Price attacked Black Cat's syndicate with the Mania symbiote, Gargan was transformed into a Venomized version of the Scorpion, revelling in regaining symbiote powers. This proved to be short-lived thanks to Agent Anti-Venom, but Gargan volunteered to join the FBI's Anti-Symbiote Task Force in order to become the host of the Venom symbiote's latest spawn, but was foiled when he went AWOL to kill Venom and was incapacitated by Agent Claire Dixon.

In Absolute Carnage, Gargan picks a fight with Miles Morales while trying to rob an armored car, but they are forced into an Enemy Mine when a horde of Carnage Doppelgangers attack aiming to kill Gargan for the remaining traces of symbiote matter in his spine. Gargan was paralyzed by the Carnageized Norman Osborn, though Venom managed to save him from being killed and carry him to safety.

Afterwards, Gargan swore revenge on Venom and cobbled together a suit of War Machine armor jury-rigged with anti-symbiote weaponry, calling himself "Virus".