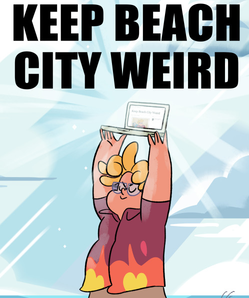 Dispatches of TRUTH from the Beach City Undergriund (sic)
Advertisement:

is an official Character Blog for Steven Universe written by series head writers Matt Burnett and Ben Levin from the viewpoint of Ronaldo Fryman. In it, he tells about his insane theories as to what's been causing various strange happening around Beach City (that were actually caused by the Crystal Gems) as well as largely unrelated ramblings on everything supernatural and conspiratorial.

An entry was made for most episodes in the first three seasons, generally related to events or thematically to the plot, and released shortly after that episode airs. A book based on the blog, titled Keep Beach City Weird: You Can't Hide the Truth!!! was released in April 2017. An advertisement for said book is the last post on the blog, as Burnett and Levin left the show around that time to begin production on Craig of the Creek, which they created.

open/close all folders
The blog
The book