The Rest Shall Pass
aka: I Got This 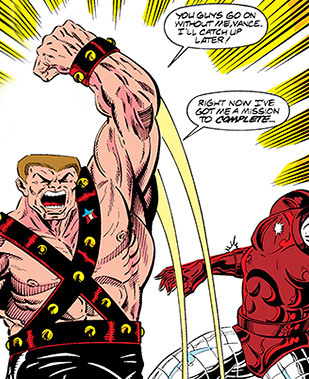 "You two go on ahead. This one's mine."
— Yang Xiao Long, RWBY, "No Brakes"
Advertisement:

The good guys are on their way to kill the Big Bad, foil the Evil Plan, or rescue the Damsel in Distress, but they only make it so far before a bad guy pops up and gives them the old You Shall Not Pass! Inevitably, one of the team will step up and say, "You guys go on ahead. I'll take care of this guy." He then stays behind to fight the villain while the rest of the group moves on.

Often, this process will repeat itself until only one team member is left... and he has to face the Big Bad alone! ...Or not.

This happens often in anime probably because of the concept of Japanese Spirit, which despite supposedly and nominally encouraging teamwork it paradoxically also encourages each member of the "clan" to take on their opposite counterpart alone.

Contrast with Leave Him to Me! and You Shall Not Pass!, the difference being that the bad guy gets in the way of the heroes in this trope, whereas a hero will turn to fend off a pursuing bad guy in the other. Usually leads to massive amounts of I Am Your Opponent. May overlap with The Only One Allowed to Defeat You.

Alternative Title(s): I Got This