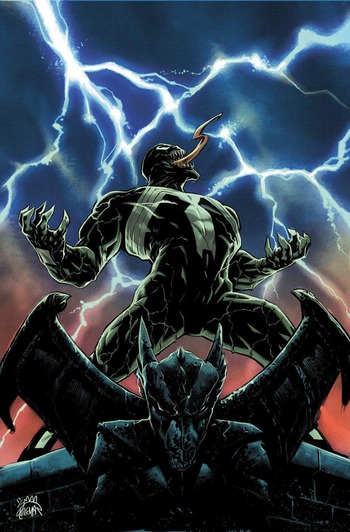 The Comeback King
"Honestly... do you know anything about that thing besides big teeth and flashy spider symbols?"
— Rex Strickland

Venom is an ongoing series launched in 2018 as part of the Marvel: A Fresh Start initiative, following Mike Costa's run. Written largely by Donny Cates with art primarily by Ryan Stegman, the run was planned to be a Long Runner and lasted until April 2021, with it being announced in January 2021 that it would end with the 200th legacy issue.

After the events of Venom Inc. and "Go Down Swinging", Eddie Brock finds himself suffering from strange nightmares with his symbiote slowly losing control of itself. After being kidnapped by former Symbiote Soldier Rex Strickland, Eddie is drawn into the wider world of his "other" and must once again don the mantle of Venom to confront the Symbiotes' dark past.

While the series is a single ongoing (for now), it also contains a number of one-shots meant to expand on the story. The run consists of:

Not to be confused with Venom (2018), the film released in the same year.

In addition to the usual Venom tropes, the run contains examples of: