This is a character sheet for Pokémon Mystery Dungeon: Gates to Infinity.

Warning: Most characters here are Walking Spoilers, and thus all spoilers are UNMARKED. You have been warned.

A human who was transformed into one of five Pokemon and transported into the Pokemon world after hearing a call for help.
Advertisement:
The Partner

One of five Pokemon who end up meeting the hero shortly after their arrival in the Pokemon world and do their best to help them from that point on.
Dunsparce

A young, somewhat cowardly Dunsparce that the team rescues from Stompstump Peak. Is best friends with Emolga.
Emolga

A world famous adventure (in)famous for capturing the hearts of everyone in Post Town, but never returning their feelings. Although normally proud and easygoing, she becomes unusually bitter whenever the topic of friendship comes up. This changes when she meets the Player and Partner.
Umbreon and Espeon

A team of researchers investigating the world's dungeons. They've refined the Entercard travel system, which comes in very handy.
Advertisement:

Gurdurr is a retired carpenter and has two Timburr as his apprentices. After a series of accidents, Gurdurr has resorted to becoming a scam artist while the two Timburr reluctantly help him.
Timburr and Timburr

Gurdurr's apprentices. Reluctantly followed him into a life of crime, but manage to get the hero and partner's help in making him stop.
Scraggy

A mysterious character who bumps into the partner in Post Town one day. He's a criminal who helps out Gurdurr in his attempts to scam the player. After this, he is dragged back to Post Town by Quagsire and forced to run the Move Shop.
Quagsire

The owner of the land the partner purchases, who quickly becomes a fixture in Paradise as he oversees your decisions of which recruits you take out on missions. He turns out to have once led a firm that punished criminals.
Advertisement:
Victini

A Pokemon that sets up shop at the start of the V-Wave season. He likes to go on about his V-Wheel.

Virizion's former best friend. Claims to have gone to Great Glacier just to get away from her, and that they never really were friends to begin with. He's lying. The real reason he said this to her was because he accidentally stumbled upon the Big Bad's plot, and didn't want to put her in danger as a result.
Hydreigon

A Dragon/Dark Pokemon who's first seen terrorizing a Munna. Revealed to be very important in the late game, to the point of being essentially a Walking Spoiler.
Cofagrigus

A Rock-type Pokemon known as "The Box Buster". He runs a shop in Post Town dedicated to opening Treasure Boxes.

A Psychic-type Pokemon who is initially seen being terrorized by Hydreigon. The exact details also constitute being a Walking Spoiler.
Kyurem

A Dragon/Ice Pokemon who can see the future.
The Bittercold 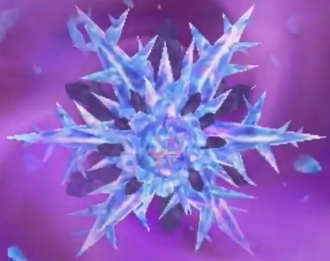 The true villain of the game, a monster created by the world's despair.