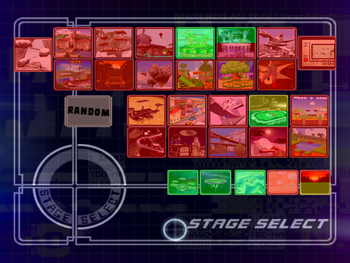 Red = banned in tournaments.
Yellow = counterpick (can only be picked by the loser of the previous match).
Green = always legal.
Upper half is singles, lower half is doubles.
NO ITEMS! FOX ONLY! FINAL DESTINATION!
— An infamous description of any given competitive Super Smash Bros. Melee match.
Advertisement:

A gaming community's refusal to congregate in any but a few choice arenas for play. Certain levels are played on over and over again without any deviation due to people either knowing a certain stage well or the level requiring a certain amount of skill and knowledge to get around on, which filters out people who never played on that level before. A type of Complacent Gaming Syndrome.

However, for competitive tournaments, this is often enforced by the rules, and for good reason — many games with a tournament scene have particular levels with exploitable bugs or a lopsided advantage toward a particular side or character.

In online games these are often found in "24/7" servers that play nothing but a single map over and over again, or are likely to be constantly voted for in case of games that work on server lobbies.

For players who look down on anyone who likes playing on anything but a few set stages, see "Stop Having Fun" Guys.